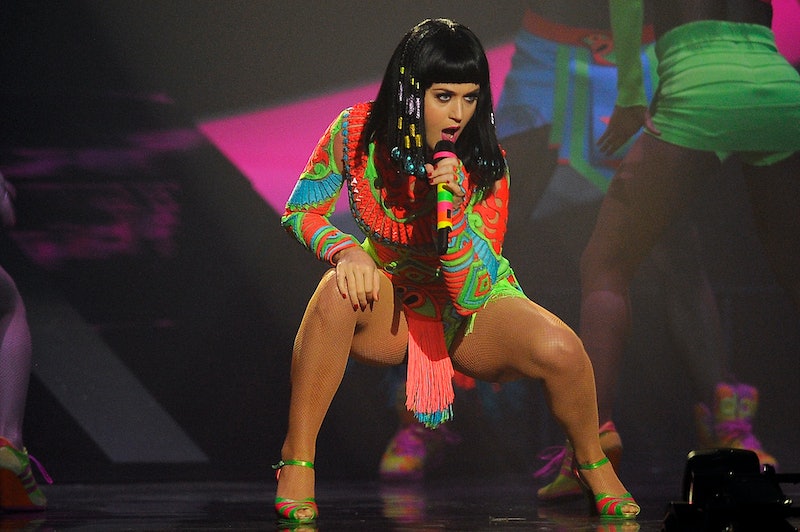 It's that time of year again: The Super Bowl is on its way back to television. If you're like me you couldn't care less about football, but there are those sleek commercials and great halftime performances, right? This year, by the time the 2015 Super Bowl starts, we'll be awaiting Katy Perry's Super Bowl halftime show with Lenny Kravitz as a guest performer (they seem like a weird pairing, but I'll roll with it). Generally, the Super Bowl halftime show starts around 8 pm ET (Beyonce, for example, took the stage at 8:10 pm — right at the start of primetime). I'm not a Perry fan, but I'll reserve judgement until she actually takes the stage around 8 pm-ish on February 1.

But what can we expect from Perry's halftime show? Perry shared a bit about her halftime plans with ET:

I can tell you this: I have some special guests, I have many costumes, I have different worlds that I'm creating and I would say that my entrance and my exit are very unique ... I am not Beyonce! We all know that. I am human. I'll be something else. There's so many flavors of ice cream and I'll be a different one.

Real talk: I'm not a Katy Perry fan. Sure, she has catchy songs on her side like "I Kissed a Girl" and "Roar," but I don't really count those songs as iconic, plus I'm still worried she'll throw in another instance of cultural appropriation. Is that a bit harsh? Sure. But the Super Bowl halftime show is a big deal, and I tend to expect a lot from these performers. At its best, a great halftime performance mixes showmanship, sharp choreography, charisma, and that hard to define "it" factor.

If Perry knows what's good for her, she'll take a little direction from these classic game-stoppers:

Did Super Bowl halftime performances even matter before Michael Jackson hit the stage in 1993? Jackson may be a controversial figure (to put it mildly), but he was definitely an amazing performer and artist. His 1993 halftime performance mixes iconic songs, killer dance moves, and a pretty amazing entrance.

Watching this performance brings me back to my boy band-obsessed middle school days. This definitely feels less timeless than many other halftime events, thanks to the inclusion of Nelly (I mean, what ever happened to him?), but it's still aces in my book.

Madonna proves in her 2012 Super Bowl halftime show why her career has spanned decades. She's never been the best singer but she knows what it means to be a pop star and give your audience all they need and then some. Plus, we got great cameos from Nicki Minaj and M.I.A.

There are other halftime performances that probably deserve to be on this list but the 2004 Janet Jackson and Justin Timberlake Super Bowl show is the most iconic. It's a shame Janet's career fizzled out and the last few seconds of bare nipple is all anyone remembers from this performance because it is pretty great.

I'd argue Prince kills it more than anyone else on this list. Prince has always known how to put on a show. The 2007 Super Bowl halftime performance mixes his own hits, covers of other iconic songs, and his usual erotically-tinged greatness capping things off with an epic rendition of "Purple Rain."

This list could never be complete with Queen Bey. Beyonce proves why she's the baddest dame in the game with her 2013 Super Bowl performance, showing off great choreography, an interesting medley of hits (including "Crazy in Love"), and a striking fashion sense to boot. Seeing a mini-reunion of Destiny's Child was simply an extra bonus.

Does Katy Perry have what it takes to live up to these stars when she performs? I'm not so sure, but when the Super Bowl kicks off February 1 you can decide for yourself.