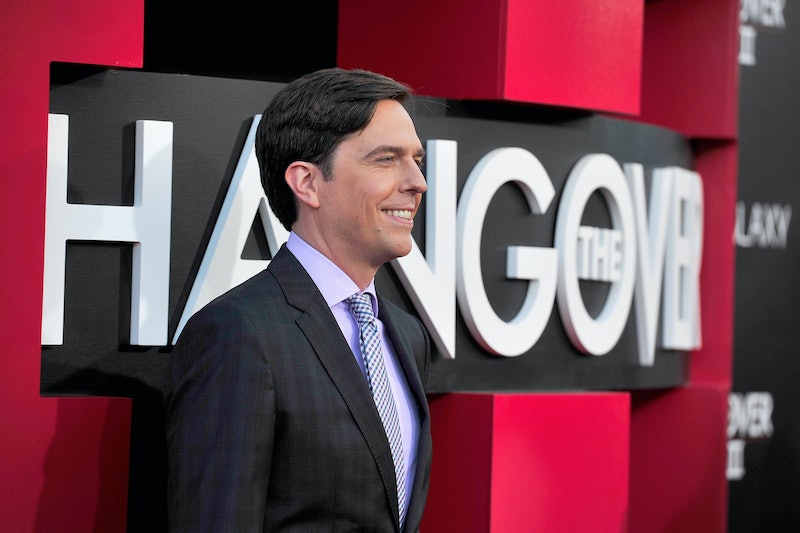 The Register-Mail reviewed Knox College’s 168th commencement ceremony this past Saturday. The nationally ranked private, liberal arts school is known for bringing in the top brass to bid its graduating seniors farewell, and this year was no different. Delivering the commencement address this year was actor/comedian Ed Helms. Helms channeled his inner funny at the lectern, mocking his Hollywood roles, Knox College’s “Prairie Fire” moniker, the antiques—I mean, elderly members of the audience to whom he was unrecognizable, and more. The jokes served as a segue for the more somber portion of his speech: Fear, and the importance of embracing it, rather than running away from it.

“I’m known for playing a character who makes terrible decisions and then can’t remember them, so I was kind of scared of screwing this speech up,” said Helms in reference to his character in The Hangover movies. “Fear is good, though. It is one of the most valuable things you can experience. Fear can be a spirit guide on your path to a meaningful life. If you strike the right kind of relationship with fear, it can tell you a lot of useful things. Fear challenges you, sharpens you and makes you stronger," Helms says.

Here, Helms innocuously skates the surface of truth rather than cracking the Freudian ice. I think we have a cultural tendency to regard fear as something inevitable, to brand it as the unfortunate biological inheritance passed down to us from our loinclothed ancestors. Yet fear is not wholly inherent. Rather, the breadth of our fears is learned. Consider experiences such failing a test or being rejected by an institution or a prospective employer. These instances do not, in and of themselves, trigger our biological fight or flight response in the same way that the fear of fire or loud noises do. They exist outside of that common Jungian knowledge and represent something more abstract than literal danger: That is, the fear of failure.

What is it about the failure that makes us our hairs stand on end and invokes our primal urge to bolt? Rarely does failure constitute an actual threat. My thoughts? We run from failure because we have been taught that failure is undesirable, that it defines us, and that success and happiness are dependent on eluding it as much as possible.

The truth? These are all lies. Myths served on a silver platter by society and spoon-fed to us from birth. It's time to deconstruct these untruths and reevaluate how we look at "failure".

1. Failure is Undesirable. What is it that makes failure undesirable? Is it inherently undesirable or is it undesirable because we have been socialized to view it that way? My vote would be for the second school of thought. I do not believe that we, independently, are crippled by the failures in our lives. We are crippled by the societal construction of failure, by thoughts which reduce us to our mistakes.

2. Failure Defines Us. How can we be defined by something that is not permanent? Failure is fleeting and is by no means the measure of a person. If anything, all failure does is reveal one's humanity. It does not, in my estimation, diminish it.

3. Success and Happiness Depend on Eluding Failure. Nope. Success occurs at the intersection of failure and perseverance. The greatest breakthroughs are felt after enduring defeat. Consider: it is not until you fail that you are even able to gauge success. It is the yardstick by which progress and triumph can be measured. And what is happiness if you can't even suspend your neurosis long enough to enjoy life instead of running from it? Fear of failure does not add to life. It detracts from it by steering us away from new opportunities, challenges, and experiences and constraining our lives within the bounds of what's "comfortable" or "the norm".

In short, the fear of failure is more debilitating than failure itself. But maybe, just maybe, if we embraced and pursued what scares us, we would eventually lose ourselves so much in the chase that our fear would dissipate. I believe that's what Helms' address was really about: Daring to strive on in spite of our fears and, eventually, learning to walk in stride with them.