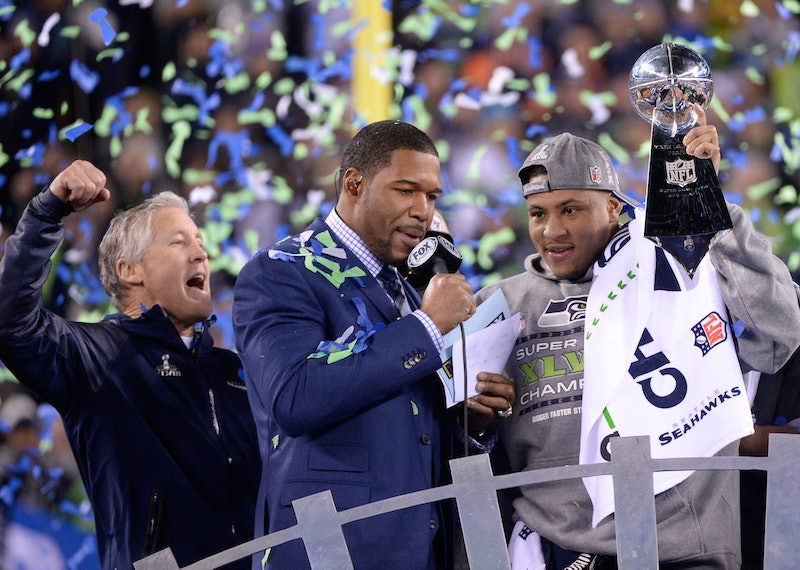 Every year, even people completely uninterested in football (like me) have something to tune into when the Super Bowl rolls around: the half time performances and the expensive, often star-studded commercials. This year the 2015 Super Bowl airs on February 1 at 6:30 pm ET. We'll see Katy Perry perform at the halftime show with Lenny Kravitz in tow. If I'm being real, Perry is no Beyonce, so she's got a lot to live up to. And while Perry will definitely have plenty of wigs and props to distract me, I'm far more interested in the American pastime that is watching Super Bowl commercials. But until the big day (just a few weeks, guys), all we can do is look to the past and find what dazzled us in times gone by.

Of course, there's a formula to these commercials. They're bigger and louder than most commercials and they're usually chock full of celebrities. After all, companies are trying to capture our attention and spending a reported $4.5 million for 30 seconds of airtime to air during the Super B owl . That's a lot of money for only a few seconds in which to catch your audience's attention. Because of the time crunch, you can bet there will be one or two adds that tread into sexist territory (someone has to be the GoDaddy commercials of 2015, I suppose) which result in an onslaught of think pieces and well-earned feminist anger. But instead of focusing on the kind of crass commercials that piss us off, let's bide the time waiting for kick-off by taking a look back at the best Super Bowl commercials of all time:

This Volkswagen ad wins major kudos for being simple, a bit geeky, and super adorable.

The 1990s gave us supermodels who completely embodied the term: Beautiful with a lot of personality — what more could you want? As a kid I had a crush on Cindy Crawford, who remains one of my faves from that era of fashion. I'm obviously not alone in that, if this famous commercial is any indication.

This commercial launched the career of actor Isaiah Mustafa, created tons of memes, and went completely viral. It mixes two of my favorite things: weird humor and hot dudes.

Apparently, Apple can save us from a frightening, 1984 style dystopian future. Sure, OK. I doubt that. But the Ridley Scott-directed commercial is still pretty iconic.

This commercial is manipulative in its utter cuteness. But it still isn't cute enough for me to ever drink a Budweiser. Sorry, Clydesdales.

This 2014 Super Bowl Cheerios commercial spurned a lot of chatter because it depicts an interracial couple. There's nothing controversial about anything in this commercial and racists can shove off if they think so. It's just super cute.

Newcastle Brown Ale used to be my cheap beer of choice in college. Now, I spend an ungodly amount of money on the nectar of the gods (aka craft beer) even if I am broke with expensive taste, to quote Azealia Banks. The beer brand kicked things off early by spoofing the classic Doritos Super Bowl commercial. It's an ingenious way for Newcastle to get in on the conversation of Super Bowl commercials without having to shell out million of dollars to be a Super Bowl commercial. Smart move, Newcastle.