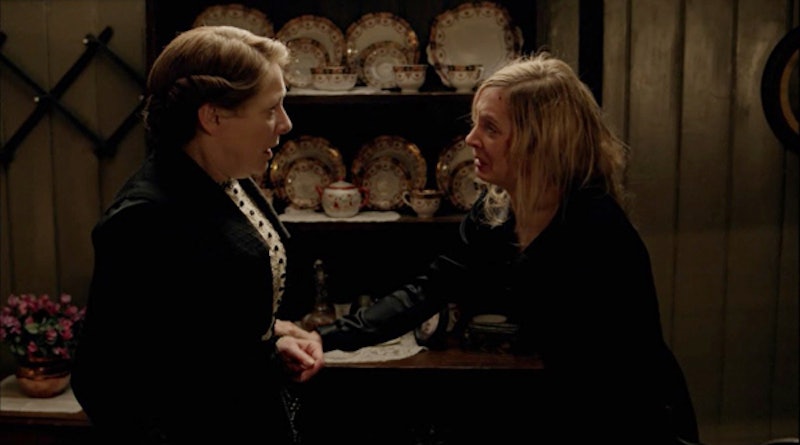 Downton Abbey fans were stunned watching Anna Bates get raped in Season 4 of the beloved PBS series. Anna was kind, thoughtful, and perhaps the most relatable character in all of Downton, which is perhaps why it was so off-putting to see the scene included in the otherwise lighthearted season. Rape could happen to anyone, and sadly has happened to far too many women. No one, young, old, single, married, lovable, hated — the list goes on — deserves to ever be forced to cope with sexual assault and its aftermath, and Anna's assault felt like a punch in the gut for those who spent four seasons identifying with the character, the optimistic foil to everyone in Downton. So though fans were stunned to watch Anna get raped on the PBS series, fans were most definitely not stunned to watch Joanne Froggatt win a Golden Globe for her work in Season 4, and not stunned to watch Froggatt play tribute to those who suffered as Anna had.

Taking the stage to accept her award, Froggatt told the crowd:

After this storyline aired, I received a small number of letters from survivors of rape, and one woman summed up the thoughts of many by saying she wasn't sure why she'd written but she just felt in some way that she wanted to be heard. And I'd just like to say, I heard you, and I hope saying this so publicly means in some way you feel the world hears you.

A classy, and necessary, response from Froggatt, particularly during a time when almost 20 percent of women have reported being raped. But it was also a particularly important speech considering the backlash Downton suffered following the Season 4 storyline. Though it's respectable that the series treated sexual assault with the seriousness it deserves, Downton was also accused of "fridging" with Anna's rape storyline. In other words, physically harming a female character in order to explore how it affects a male character — in Downton's case, Mr. Bates. As TIME's Graeme McMillan wrote in an article about the subject in February:

From the viewpoint of Downton Abbey, the person who suffered most wasn’t Anna, but her husband Bates (Brendan Coyle). At first, she tries to hide the attack to protect him from whatever calamities he’d cause seeking revenge, which leads to almost two full episodes focusing on Bates as the victim of circumstance, with Anna harangued for not telling him the truth ... In this season of Downton Abbey, the entire rape storyline is one long, slow, continual fridging of Anna, seemingly for the sole purpose of providing Bates inner conflict. While there are those who defend the treatment of the subject as being period- and class-appropriate, I’m unsure whether that feels enough of a justification for a show made today.

And the criticisms of Downton's treatment of rape didn't stop there. Others also pointed to the series' lack of recognition for how women cope with rape — instead Downton implied that Anna's only worry after the assault was shielding her husband from the news. As BuzzFeed's Emily Orley wrote about a scene in which Mr. Bates and Anna dine with Anna's rapist, Mr. Green:

What we have seen is Anna sitting and eating dinner directly across from the man that attacked her. While that scene could have portrayed with vivid emotion, letting the viewer in on what Anna was thinking and feeling even without words, the camera instead jumped back and forth between Mr. Bates and Mr. Green, with just a quick glimpse of Anna faking a smile in between. What I felt as a viewer during that scene was horror; Anna certainly had to have felt something.

So thank god for Froggatt, for finally putting the attention on who deserves the attention most. Not just her for her incredible portrayal of a rape victim, but the rape victims themselves.