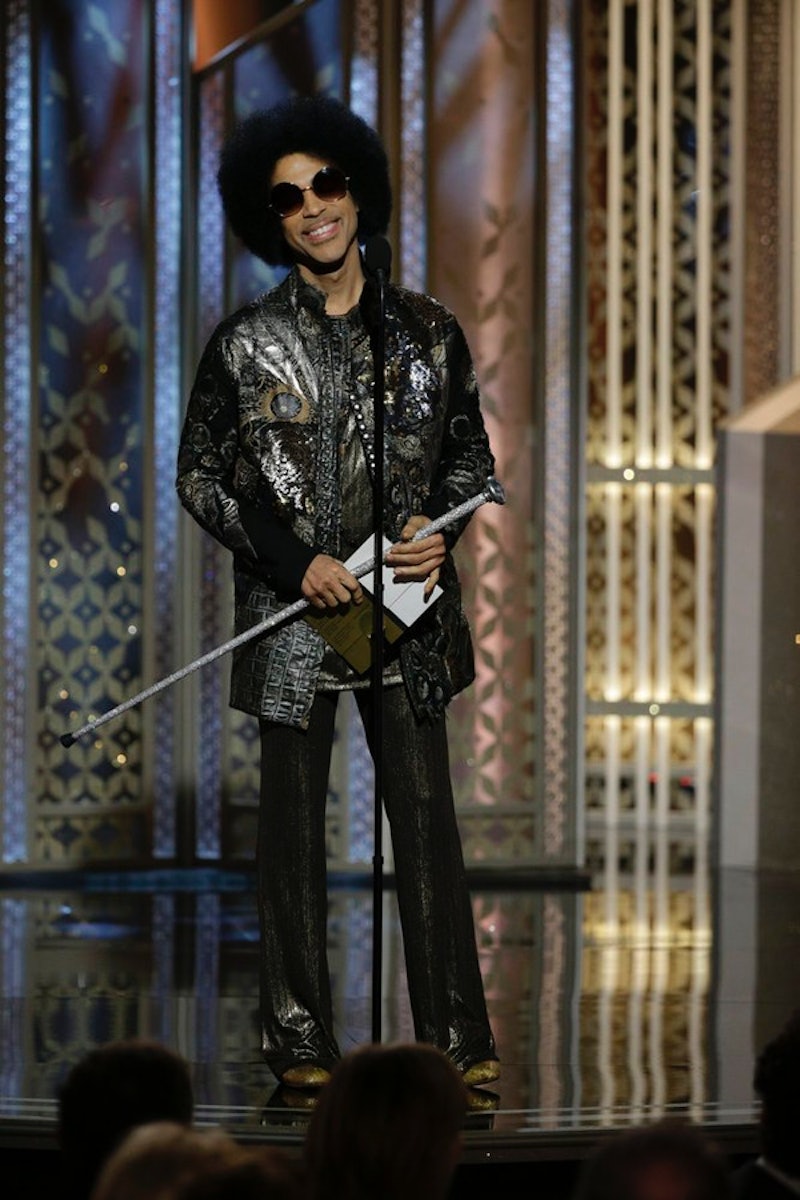 You have certain expectations when you watch an awards show like the Golden Globe Awards, airing Sunday night on NBC. You absolutely know that Tina Fey and Amy Poehler will be the most hilarious hostesses (past years speak for themselves, right?). It could've been predicted that George Clooney and new wife Amal would totally steal the show on the red carpet, and they did. And we definitely expected lots of booze to be flowin' at one of the few awards shows that is unabashedly cool with drinking, but I have to admit, I was totally thrown off my Golden Globes game when Prince walked out onto the stage to present Best Original Song. Yes, Prince.

The Artist Known as, Formerly Known as, and now Known Again as Prince strolled out in a baller shiny suit, chill and just like, "Hey guys. Whatevs." He held his cane as he strolled out and the audience went insane. Louis C.K. whistled. Alison Janney had the biggest smile on her face. Prince didn't react or say much — and he didn't waste any time with jokes or pleasantries. He just went straight to the nominees and crowned the winner: Common and John Legend's song "Glory" from Selma.

Even during Common and Legend's very touching speech, Prince just stood there, owning the stage and his suit shining on. Seriously, how can one be as cool as Prince? Is there a special Golden Globe we can give him for being the best surprise presenter?

Apparently, his reps confirmed his presence at the Globes to US Weekly not long before the ceremony actually kicked off. But I have to say, it was even better not knowing, because somethings in life are better as a surprise.

And here's the video proof:

More like this
Amanda Seyfried Reflects On 'Mean Girls' & "Gross" Remarks That Men Made After It
By Jake Viswanath
Stormi Just Walked A Red Carpet With Mommy Kylie Jenner & Daddy Travis Scott
By Hugh McIntyre
Is Megan Fox Pregnant? MGK Gave A Shout-Out To Their “Unborn Child” Onstage
By Hugh McIntyre
Prince Harry Spoke Out About Archie & Lilibet’s Futures And What Worries Him The Most
By Sam Ramsden
Get Even More From Bustle — Sign Up For The Newsletter