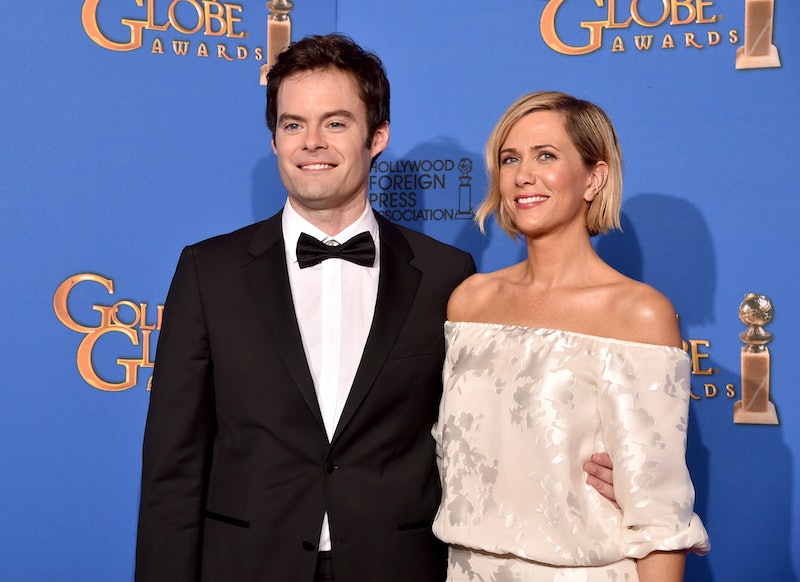 It's official. If they are really telling the truth and Amy Poehler and Tina Fey really won't host the Golden Globes after this year, there is only one duo worthy of filling their giant shoes: Bill Hader and Kristen Wiig. The Saturday Night Live alums and Skeleton Twins co-stars killed it when they presented at the Golden Globes telecast on Sunday night. For some reason the entire room at the Globes did not erupt in laughter at the gag that Wiig and Hader told E! Network interviewers they made up right before they presented, but they may have all just been too drunk to understand the sheer perfection of the bit. The hilarity of the bit was not lost on me and made me realize that Wiig and Hader should literally do everything together.

So what exactly was so great about the moment? Wiig and Hader were up onstage to present Best Screenplay at the Globes and after both feigning shock that Wikipedia revealed that making movies isn't possible without a screenplay, they decided to just recite famous movie lines in the most incorrect ways possible while trying to keep as straight a face as possible. Or maybe I'm wrong and I just missed Arnold Schwarzenegger's famous line from Terminator:

Other fantastic "famous movie lines" from the bit include the iconic line from ET: "Kids, I really, I gotta get back to my planet." And who could forget the one and only quote by Robert De Niro from The Godfather: "Hey, uh, who's in my driveway? I gotta get into the city over here."

But while I and many others definitely laughed quite loudly at Wiig and Hader's perfection, the bit did feel reminiscent of another bit performed by Wiig: The time she presented Best Actress in a Motion Picture Comedy or Musical with Will Ferrell at the 2013 Golden Globes.

Ferrell and Wiig's fake descriptions of these fine actresses' nominated performances in their films of 2013 was oddly similar to the way Wiig and Hader flubbed iconic movie lines. But because of Hader and Wiig's obvious chemistry and friendship, their bit worked in a different and at times better way. They were able to work off each other better than Ferrell and Wiig, and definitely deserved to take over the reigns as 2016 Golden Globes hosts, provided they ad lib most of what they do that night. Social media is definitely with me on this:

Some people took the Wiig/Hader hosting gig idea even further to a place that makes a whole lot of sense:

Think about it. Seth Meyers. Jimmy Fallon. Both SNL alums, both hosting their own talk shows. It just makes sense. Then there's this:

Another opinion with which I must agree. Some people and media outlets Hoped Hader and Wiig would bring back another one of their amazing moments together:

But of course, for every lover of the idea and of the duo, there's always a hater. And it's almost always Piers Morgan.