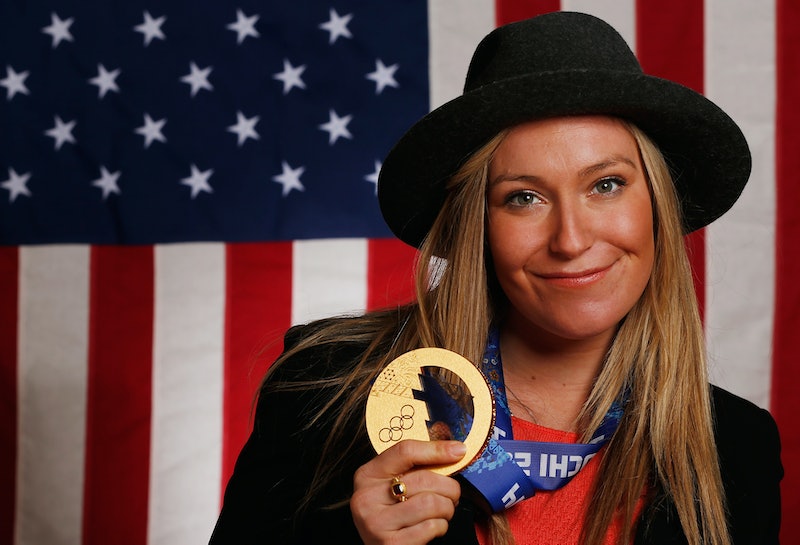 She made the mistake of getting on Kenya Moore's bad side, but to those who aren't up on the lives of past olympians, you may have been wondering who Jamie Anderson on Celebrity Apprentice is. And you should probably remember her name, because it just so turns out that she is one of the most recognizable female faces in snowboarding.

And if you think about it, her beef with former Miss USA and Real House of Atlanta star Kenya Moore isn't surprising — Kenya isn't exactly known for her amiable attitude. I mean, sometimes the things this woman says are sort of bonkers. During a challenge to promote Luvo, a healthy frozen food line, Team Infinity (the women's team) is tasked with creating a menu presentation. When Jamie Anderson decides to assist her teammates while wearing an athletic uniform, instead of the waitress' outfit, Kenya Moore shuts her down because she dressed "inappropriately." Jamie is insulted by Kenya's short, dismissiveness and quickly calls her out on it only to receive a half-hearted apology from Kenya. The feud doesn't quite fizzle out when Jamie brings up the incident to Donald Trump, only to be insulted by Kenya again.

The woman who dared to make an enemy out of Kenya Moore may not be the most recognizable face in America, but you're probably pretty damn proud of her. Anderson is not just a snowboarder, she's a snowboarder and an Olympic gold medalist. To boot, she is seriously kicking butt in what is largely considered a the male-dominated world of sports.

Anderson competed in the 2014 Sochi Olympics winning gold in slopestyle snowboarding. She has also won four gold medals at the Winter X Games and is the youngest Winter X Games medalist ever. That's right, at 15 years old, she was already an award-winning snowboarder. So how did Anderson get her start? Though she has seven siblings, it was her two older sisters who introduced her to snowboarding when she was just nine years old.

If anyone is going to stand up to Kenya, it's going to be a cookie as tough as Anderson. Not only is she incredibly driven and talented,but she represents a pretty awesome charity on Celebrity Apprentice. Protect Our Winters serves to reduce global climate changes effects on sports and local economies by mobilizing the winter sports community to make more environmentally friendly choices.

Now that Anderson and Moore are butting heads I can't wait until one of them steps up as project manager. Heads. will. roll.