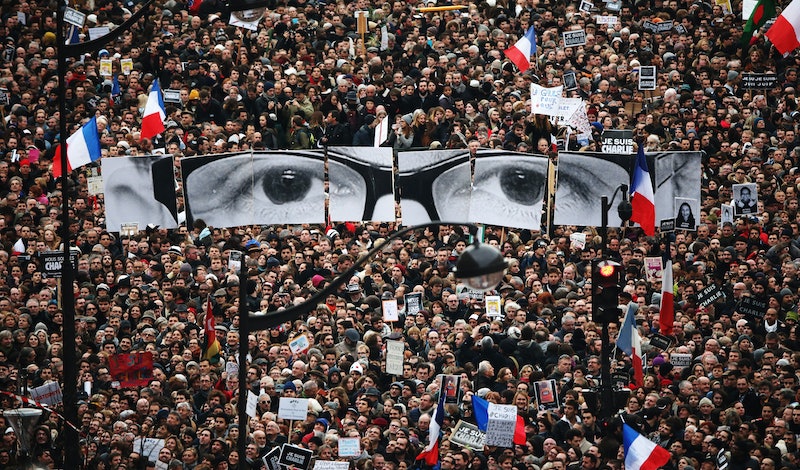 On Sunday, millions gathered in Paris and beyond to chant "Nous Sommes Charlie" in a monumental show of solidarity and unity. But following a week full of terror attacks in the French capital, authorities say threats of terrorism are not over yet. According to The New York Times, France will deploy thousands of security forces — police officers and soldiers — across the country by Tuesday night. Many of these troops will be guarding Jewish schools, which French officials believe could be under attack in the coming days and weeks.

Defense Minister Jean-Yves Le Drian told reporters on Monday that 10,000 extra soldiers and police officers would be mobilized. "The threats remain and we have to protect ourselves from them," the defense minister added to reporters.

Government officials said they were focusing on "sensitive sites," including the 700 hundred Jewish schools operating throughout the country, the Jerusalem Post reports. In a briefing with the media, Interior Minister Bernard Cazeneuve said more than 4,700 security forces, including 700 police officers, will be sent to these Jewish schools, as well as other Jewish sites in the nation. According to the Jewish Virtual Library, France is home to 475,000 Jewish people.

Synagogues, Jewish schools, but also mosques will be protected because in the past few days there have been a number of attacks against mosques.

The heavy focus on France's Jewish sites comes after Friday's assault, where terrorist Amedy Coulibaly took nearly two dozen people hostage at a kosher market on the outskirts of France. Authorities have said that Coulibaly, who was linked to the Charlie Hebdo terrorists Cherif and Said Kouachi, purposely targeted the market because it was Jewish. Coulibaly killed four shoppers on Friday.

Local news sources have also reported that weapons and ISIS paraphernalia were found in the apartment. Authorities believe Coulibaly used the apartment to plan his attacks. In addition to taking hostages at the kosher market, French authorities have linked Coulibaly to the killing of a female police officer in Paris last Thursday, just a day after two gunmen stormed the offices of satirical weekly Charlie Hebdo.

A massive manhunt is currently underway for Coulibaly's girlfriend, 26-year-old Hayat Boumeddiene. However, the search for Boumeddiene, who authorities believe is a key witness in both the Charlie Hebdo and kosher market attacks, will be more difficult if it's true that Boumeddiene has already entered Syria.