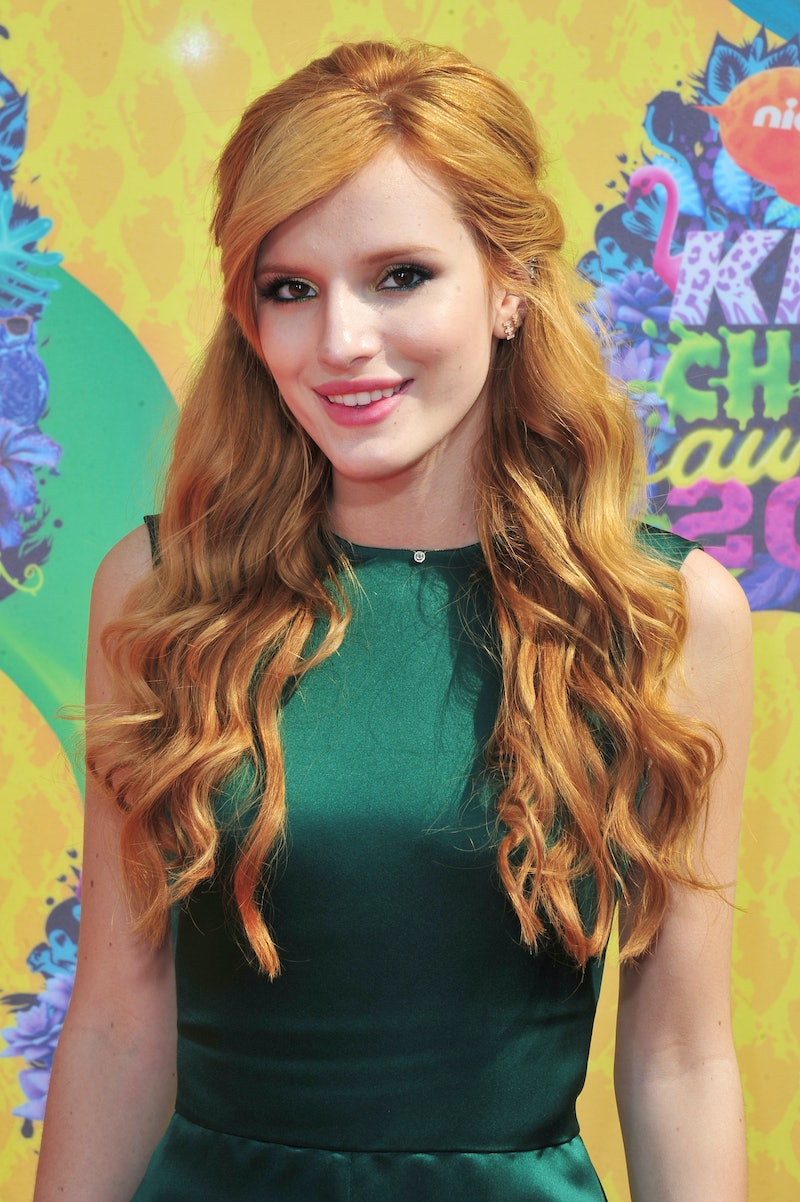 She was already a quadruple threat as an actor, singer, model, and dancer, but now 17-year-old Bella Thorne has added young adult writer to her long resume. (Which makes her a quintuple threat?) In late 2014, Thorne published the first book in a new YA series, Autumn Falls, loosely based on aspects of her own life and personality — but no, it's not her, despite the signature fiery red hair on the book's cover.

Autumn Falls centers on the titular character who starts a new high school in a new state after her father died in a tragic accident. And things aren't going exactly peachy. Autumn struggles with dyslexia, but that isn't the hard part; she also seems to have caught the attention of some mean girls at school and is fighting off cruel rumors about herself. But a little magic enters the picture when she finds that writing letters to her father in an old journal makes her wishes come true.

You probably know Thorne best alongside Zendaya as CeCe Jones in the dance-filled Disney Channel show Shake It Up, but you also could have caught her as Bill and Barb's daughter in season four of Big Love or in this summer's Drew Barrymore-Adam Sandler movie Blended. And rumor has it, Thorne has also nabbed a rather hush hush part on MTV's upcoming series Scream , based on the horror movie series and will appear in The Duff, starring Mae Whitman. Oh, and I mentioned that she also has an album out, right?

So how does she find the time to also pen a YA series? I talked with Thorne about that, where Autumn Falls is headed next, and the absolute importance of female friends.

BUSTLE: You’ve been on TV, in movies, and you have an album out, so you’re clearly quite busy – what inspired you to take the time to write a YA novel?

BELLA THORNE: I just wanted to prove to kids that if I'm dyslexic and I can write a book series with one of the most famous book companies in the world, then you can do whatever you want to achieve and don't let anyone tell you that you can't, because that's completely not true.

You’ve been forthright about the fact that you have dyslexia, and your character in the book Autumn Falls also has it. Was that something that was important to you to include?

It was important for Autumn to be relatable and for her to get through the same kind of things that any kid would go through in high school, and so I wanted them to relate to Autumn. She has problems that's she's going through and trying to balance her dyslexia with school and with everything else.

Did you pull any other features of Autumn Falls the character or the book as a whole from your real life personality or experiences?

Yes, I took a lot of facts about me to shape and mold the character to what I wanted, but she's not me. She's Autumn.

This is going to be a series, can you let fans in on what to expect next for Autumn?

I'm writing the second one right now, and you can expect drama. Autumn is growing up and making some big-girl decisions. You can also expect new relationships to come into play. There's a relationship that is my favorite, and everyone has kind of said, "Oh so-and-so and Autumn should get together," and I'm kind of giving them their wish in this book, I think.

Aside from romantic relationships, you include a lot in the book about female friendships — was that something you consciously worked to add to the story?

I think your best friends, your girl friends, are so important. And I learned that from having really amazing girlfriends and my sister, and being able to talk to them about anything. Those are your girls. Love is not just about having a husband or a boyfriend, it's about having someone you love by your side, who can always be your best friend.

What do you hope your readers, older and younger, take away from Autumn Falls?

I hope they realize that this story is not just about going through high school. This is a story of, not me, but of you. This girl is you. In the first book, Autumn makes bad mistakes, and people told me, "Why did you make Autumn do that? She's unlikable there." But you know what? That's life. We do stuff that's unlikable all the time, and there's nothing you could do to never make you make a bad decision. It's impossible. And we need people to stop judging other girls and women for just small mistakes, or big mistakes. Everyone learns, and if they didn't make that mistake they wouldn't.

Because Autumn learns from her mistakes, you root for her. She gets upset with her father thinking that he manipulated her words, but when she's is going through so much pain and so much hurt from rumors about her, you have to think: "Did her dad kind of give her what she wanted?" ... Even though [what Autumn does] is not a good thing for a human being to do, it is a natural human reaction.

More like this
16 Novels That Paint A Realistic Portrait Of Abortion
By K.W. Colyard
The Enduring Appeal Of Escaping Our Own Brains
By Chaya Bhuvaneswar
9 Must-Read New Books Out This Week
By K.W. Colyard
'Bridgerton' Star Nicola Coughlan Confirms Season 3 Will Focus On Colin & Penelope
By Grace Wehniainen and Alyssa Lapid
Get Even More From Bustle — Sign Up For The Newsletter