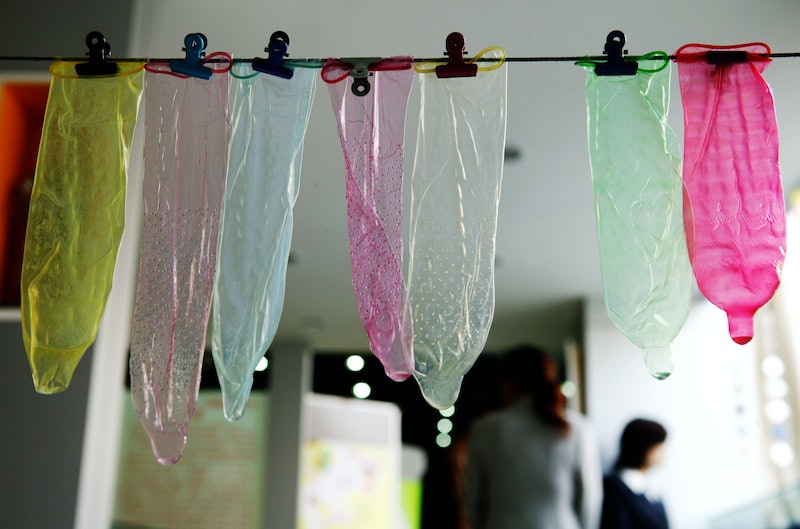 Choosing a condom is sort of like going shopping for a friend who isn't there to try on the outfit: you do your best to wade through the vast array of styles before you cross your fingers and just hope that it fits. Or, you can base your choice on ethics instead of aesthetics, and see if the condom brand happens to help protect the environment or contribute to feminist non-profits you believe in. New research suggests that 90 percent of Americans are more likely to buy from a company that backs a social cause, so if you're buying new life-saving accessories, you'll probably want to consider who else you can benefit from your purchase.

Not to be a total bummer, but there are over 20 million new STD infections every year in the United States alone, and yes, you can still get infected through oral sex, "pulling out" and "just the tip." The old "no glove no love" saying is truer than ever, which is why condoms — not diamonds — are actually a girl's best friend. Feminism is all about taking control of your sexual health (because if not you, then who?), so what's better than contributing to your own sexual health while also contributing to the sexual health of thousands of others? Here are five condom brands that donate to women's causes.

Sustain is a father-daughter owned company that manufactures sustainable, fair trade, female-friendly condoms. They donate 10 percent of their pre-tax profits to women who lack access to reproductive health care, and currently work with organizations like Women's Voices For the Earth, Breast Cancer Fund, and Health Care Without Harm.

Glyde is the first ethical, vegan, and fair trade condom brand. Since 1991 they have donated millions to HIV/AIDS prevention, and have recently partnered with Maternova, an organization that works to prevent childbirth-related deaths worldwide.

Sir Richard's Condom Company makes all-natural latex condoms with a conscience. They are currently teamed up with The Global Fund, which fights the HIV/AIDS epidemic in over 140 countries. Five percent of each (Red) condom purchase is donated to the cause.

B Condoms is the only black-owned, vegan friendly condom company. They recently joined forces with Uncle Luke from rap legends 2 Live Crew to support Empower U, a peer-based organization founded by and for people living with HIV/AIDS in the Miami area.

One Condoms created the Lust For Life campaign, which is a collaboration between artists and activists to help stop the spread of HIV/AIDS in urban communities. The funds they raise go directly to Lifebeat, an organization dedicated to youth HIV/AIDS prevention.