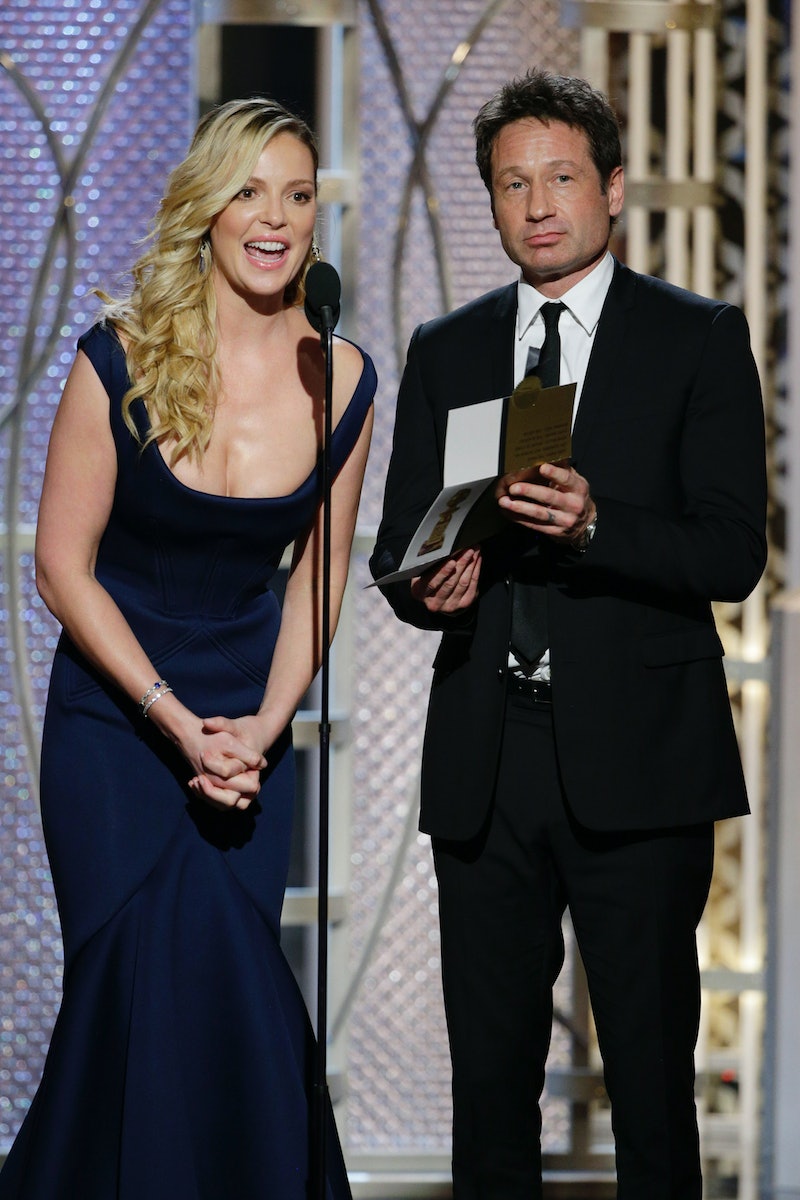 If the 72nd Annual Golden Globes had a theme song, it would easily be Nelly's "Hot in Herre," because the venue seemed to be a bit of a sweat lodge. From the presenters whose foreheads beaded with sweat on stage to the folks in the audience who fanned themselves with programs, everyone was extremely sweaty at the Golden Globes Sunday night. While conditions were apparently uncomfortable for everyone, the barrel curls and swept bangs clearly suffered the most.

The air conditioning in the Grand Ballroom at the Beverly Hilton — where the ceremony was held — was reportedly turned off according to Vanity Fair. I can't speak from personal experience, but it was supposedly in the mid-50s in Beverly Hills with high humidity from a light rainfall (which, c'mon guys... isn't THAT BAD). But Us Weekly attributed everyone's general appearance of slickness to the lethal combination of unfiltered air and light precipitation. Presenters from Katherine Heigl to Oprah looked to be a bit hotter than usual. Matthew McConaughey even disrobed himself of his suit jacket (GASP!). None was more over the heat than Olive Kitteredge's Frances McDormand, who repurposed her program into a mini fan and wore an expression that seemed to say "For Pete's sake... Can someone crack a window up in this joint?!"

Sure, the air conditioning snafu probably had a lot to do with the general appearance of schvitziness, but I'm guessing a few other factors came into play. Other than the climatic issues, why was everyone so sweaty at the 2015 Golden Globes?

A secret celebrity fun-run that immediately preceded the show

This one is far-fetched, but given the light coat of sweat on everyones bodies, it looks like everyone may have had a bit of a jog prior to the ceremony.

Numerous bottles full of bub flowed freely last night, it's possible that the non-normals in attendance paid little attention to their water. Hence, dehydration. Hence, sweat by the bucketful.

Perhaps Amy Poehler and Tina Fey's parting shot as ceremony masters was to pay a maintenance dude to crank up the heat in the venue. Although, they would directly have to deal with the unpleasantness of that prank, so this explanation is less than likely.

This one's self-explanatory. The physiological result of being so close to someone so adorable is a rush of norepinephrine, and then a surge of sweat.