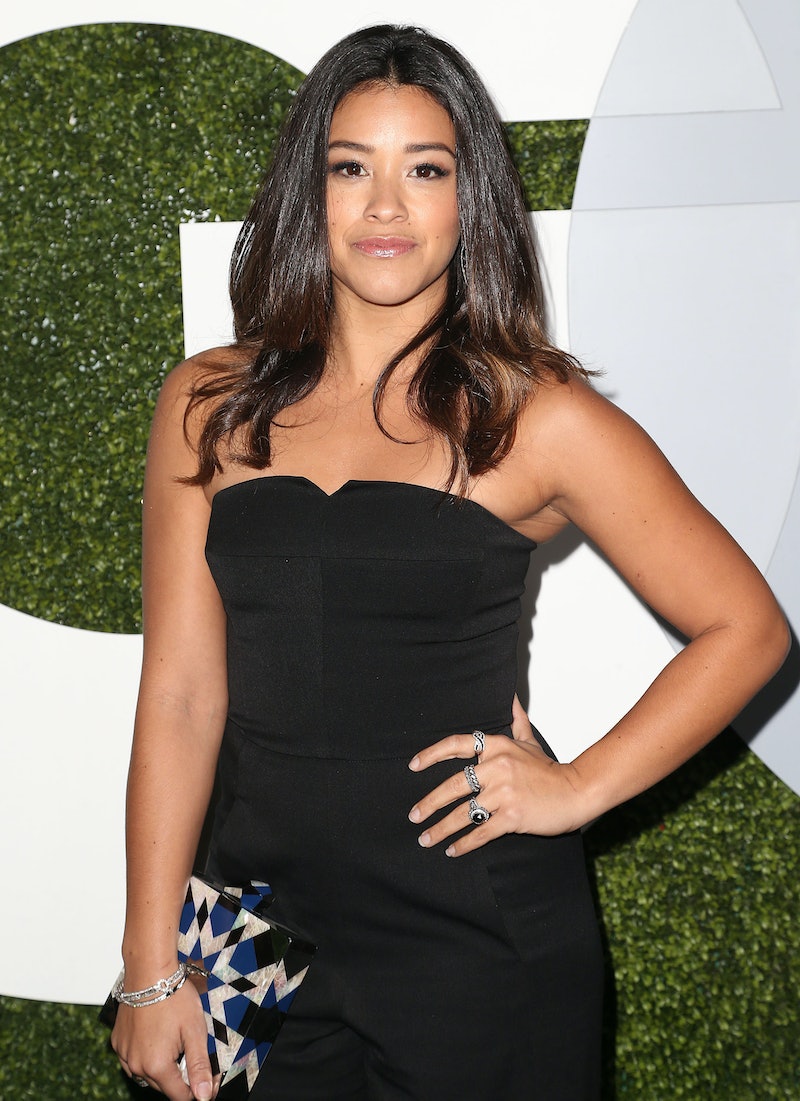 Any awards show is bound to be chock full of fashion and beauty faux pas, resulting in tons of potentially humiliating photos cropping up in Star and Ok! magazine the next day. But Gina Rodriguez's makeup mishap at the Golden Globes last night was nothing short of adorable. During her Best Actress acceptance speech, the star of the new CW comedy Jane the Virgin, Gina Rodriguez cried off her fake eyelash — which makes sense, since that speech was a real heartwrencher. Trust me, if I had been wearing falsies while sitting on my couch and watching the Globes with my dog, they would've been coming unglued, too.

It was a surprise victory for Rodriguez, who managed to beat out award regulars like Lena Dunham, Edie Falco, and Julia Louis-Dreyfus for the Golden Globe for Best Actress in a TV Comedy or Musical, and her acceptance speech was just was beautiful as her. "Thank you, God, for making me an artist," Gina shakily began, before humbly acknowledging her Latin culture. "This award is so much more than myself, it represents a culture that wants to see themselves as heroes." Help, I'm tearing up again.

By the end of her speech Gina had teared up so much that one of her false eyelashes had dislodged itself and migrated down to her cheek. Oops. But considering that the circumstance was what will probably be the most endearing acceptance speech of the award season, what normally would be a beauty faux pas just made Rodriguez all that more adorable.

Unfortunately, the same doesn't exactly go for me and you. Having a falsie unglue itself during a board meeting or on a first date won't really be conceived as sweet or adorable, so here's a few tips to keep your fake eyelashes in place during an emotional awards speech — or, you know, whatever you have going on.

The secret to keeping your falsies stuck to your eye starts with finding the perfect eyelash glue. Duh. The stuff that comes included with your drugstore lashes is pretty much always a no-go, so you're better off buying a separate adhesive. But that doesn't mean you have to break the bank! The Premium Eyelash Adhesive by Kiss is only four bucks and a little miracle worker. At $9, Duo's Eyelash Adhesive is a little more pricey, but is actually waterproof (listen up, Gina!) and comes in both clear and dark colors. Revlon's Precision Lash Adhesive is another cheap drugstore option and a tired-and-true favorite. Plus, it's latex-free for any allergy-ridden gals.

2. One Size Does Not Fit All

If you're using a full eyelash strip, be sure to cut it to fit your own eye. If you don't, the corners will be annoyingly popping up all night. You can simply trim the excess hairs from the corners or even cut the whole lash into a few pieces to position each one just right — an easy hack to fake those individual false eyelashes that are often more difficult to apply.

No need to be stingy with the eyelash glue, but a thin strip along the entire fake lash is really all you need. Always wait a few seconds before slapping that little guy on your eye. If the glue is still dripping wet, all the lash will do is slide around your lid. No bueno.

Whatever you do, don't press them down with your fingertips! The grease from your hands can transfer to your lashes, which will compromise the strength of the glue. Instead, use a clean and dry pair of slanted tweezers and gently press down to secure.