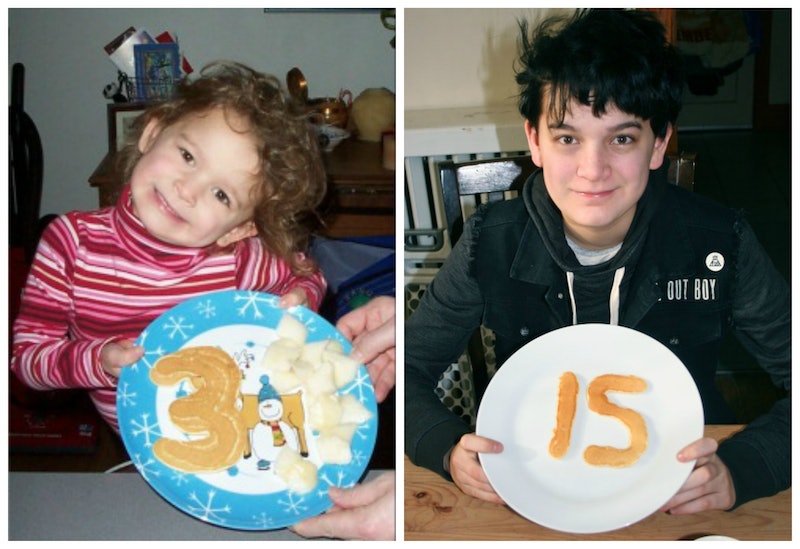 Meet Milo. He’s a 15-year-old transgender teen, and every year for his birthday, his family makes him a pancake (or two, as the case has been since he hit double digits) in the shape of his age. He’s posed for a photo with his birthday pancake every year the tradition has been running, which means he’s currently got 14 photos spanning ages two to 15 in his archives. But his pancake photographs chronicle more than just how much he’s grown from year to year; they also depict his transition and his family’s support of the process. He recently posted the photo series to his Tumblr, making a powerful and positive statement to both trans kids and their families.

Milo, who was assigned female at birth, came out to his family as transgender last year — “and in doing so,” he wrote on his Tumblr when he posted the pancake photos, “saved my life.” He continued, "If you can’t tell from the picture, 14 was a bad year for me. For every kid feeling like I was, please just wait, just wait, [because] one day you’ll realize just how worth it the wait was. I know everyone says it, but it’s true, it will get better, just please stick around so you can see it come true.” Although he noted to the Huffington Post that “there’s [sic] still struggles, as any trans person would tell you,” he feels “absolutely amazing” living as his authentic self. “I just feel so much more in place than I did in middle school,” he said. “It’s so worth it to be who I am.”

Speaking to HuffPo, Milo said he was waiting until he hit his 15th birthday so the photo set could have a “happy ending.” He continued, “There was so much bad stuff going on in the trans community because of the awful things that happened to Leelah [Alcorn], and I thought trans kids my age needed a boost of positivity.” He chose Tumblr to put out his message both because he “[spends] way too much time on Tumblr anyway,” and also, as he told BuzzFeed, because he “knew [it] was a positive environment for kids like me, and I thought it would be helpful to some people to hear my story.” He added, “I hope that [trans kids] really understand the message of ‘don’t give up’ that I was trying to get across. Being a trans teen is awful, and a lot of kids don’t live long enough to make it out of their teen years. So I guess I was hoping that more trans kids would start being excited for the future, too.”

Although Milo notes that he’s a teenager, not a professional, he’s available for trans kids and teens via his Tumblr whenever they need advice or simply a sympathetic ear. He gave an example of his words of wisdom for trans kids to the Huffington Post:

"Don’t feel pressured to come out if you don’t want to — do it on your own time. And if you’re certain there’s no way it could ever get better, don’t do something that could stop you from ever finding out if you were wrong.”

And to parents, he said this:

“Support [your kids] with your whole heart, don’t tell them they’re too young, buy them new clothes, respect what they want, don’t make them second guess themselves. Just be a huge source of positivity and make them feel safe around you.”

This. Yes. So much this.

Milo’s photographs and his story offer a beacon of positivity in the midst of an incredibly dark time, so I think we need share them as much as possible. Let’s amplify that positivity, sending it as far and wide as it can go. See the whole “pancake series” on Tumblr.