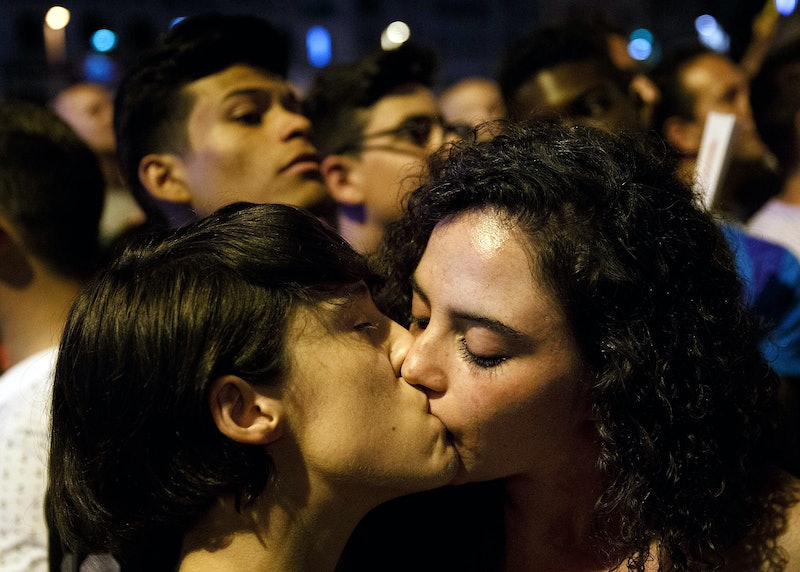 The folks at Buzzfeed have created a lot of fabulous original content surrounding LGBTQ+ experiences, but I have yet to see something as poignant and touching as their latest video "What it's Like to Come Out to Immigrant Parents," which chronicles the experiences of four people from immigrant families who made the decision to come out to their families in some way. This video is important for a lot of reasons, but primarily because it isn't filled with the optimistic bullshit that isn't productive for all LGBTQ+ communities and, instead, showcases stories that run the gamut of experiences — from total acceptance to total rejection and all that comes in between. The people in the video never once claim "it gets better" (because it doesn't always) or "your family loves you too much to never come around" (because sometimes they don't). Instead, they talk about their own experiences and the ways they maintained hope when things were grim.

There are a lot of challenges associated with coming out to immigrant parents when you yourself were born and raised in the U.S. One major one can be a language barrier that can manifest itself in two different ways. The first is that sometimes the language the child communicates in best may not be the language the parents communicate in best, making full expression and reception of feelings difficult. The second is that in many languages there's no actual word for "gay," "lesbian," or "queer," because the concepts and identities simply don't exist in the same way they do in the U.S. and the English language. It can be a challenge maneuvering around that and using awkward circumlocution to get a point across.

I myself have a coming out experience with an immigrant mother, if it can actually be called that. I didn't want to come out, but she sort of forced it (if you're a parent reading this NEVER FORCE YOUR CHILD TO COME OUT OF THE CLOSET, THANKS) by cornering me and telling me she knew what kind of life I had been living and that my "lifestyle" was disgusting and sacrilegious, condemned by both religion and science (because, according to her, the gays are the reason for HIV/AIDS). The conversation was had in both Urdu and English. The entire time I did not say a word to affirm or deny her suspicions. The words "lesbian" or "queer" weren't used a single time. For me, there was no neat little ending, no romantic gesture to indicate she would still love me forever. She ended the conversation with an ultimatum, that if I didn't stop living my "horrible lifestyle" by the time I graduated college she would be forced to pack her bags, leave the city, and continue to live her life as though she had no daughter. We haven't spoken about it since.