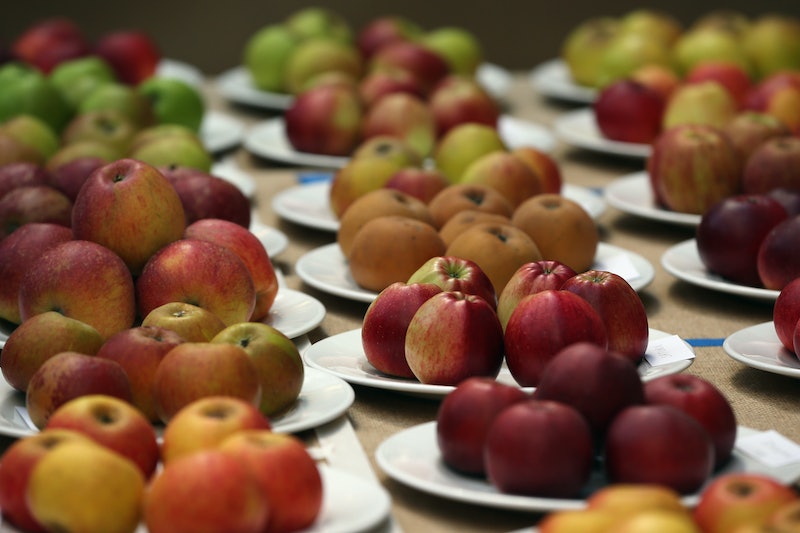 An apple a day will supposedly keep the doctor away, but if you're a fan of Granny Smiths or Galas you might want to reconsider that logic. Those specific varieties of apples are being recalled across the country thanks to listeria strains discovered in the products from California company Bidart Bros. So if your 2015 diet included eating more of the crispy fruit, you'll need to hold off a little longer.

The U.S. Food and Drug Administration issued a warning on Friday for all consumers to throw out Granny Smith or Gala apples sold by Bidart. According to the FDA release, those could also be packaged under the name "Granny's Best" or "Big B." In a terrifying turn, the FDA also notes that they could be sold under no brand name at all, so be sure to ask your grocer if the apples came from Bidart Bros.

The warning also extends to commercially produced caramel apples manufactured by the company. The outbreak started last month when caramel apples were pulled from the shelves after people fell ill from a Missouri product. Bidart was eventually traced back as the supplier for these companies, which means that the outbreak has continued since December.

The apples have been attributed to the listeria outbreak that has made 32 people in 11 states sick. A seventh person died from the outbreak over the weekend. The disease takes 3 to 70 days to start showing symptoms.

Listeriosis is caused when people consume foods that contain the bacteria listeria. It primarily affects pregnant women, infants, the elderly, and people with weakened immune systems. In fact, 10 of the people with the outbreak were pregnant, because it is easier for them to contract it. Symptoms of listeriosis include fever, muscle aches, diarrhea, and other gastrointestinal issues. Listeriosis kills 260 annually, with about 1,600 cases reported each year.

If you think that you may have had apples contaminated with listeria, you should immediately throw them out and sanitize your refrigerator, cutting boards, and other surfaces that the apples could have touched. Listeria can spread to other foods if they are left around them too long.

So, now that we've given you yet another thing to be paranoid about, let's get those New Year's resolutions jumping with another fruit. Grapes? Berries? Generally anything that doesn't have a potentially fatal bacteria embedded in its sweetness.