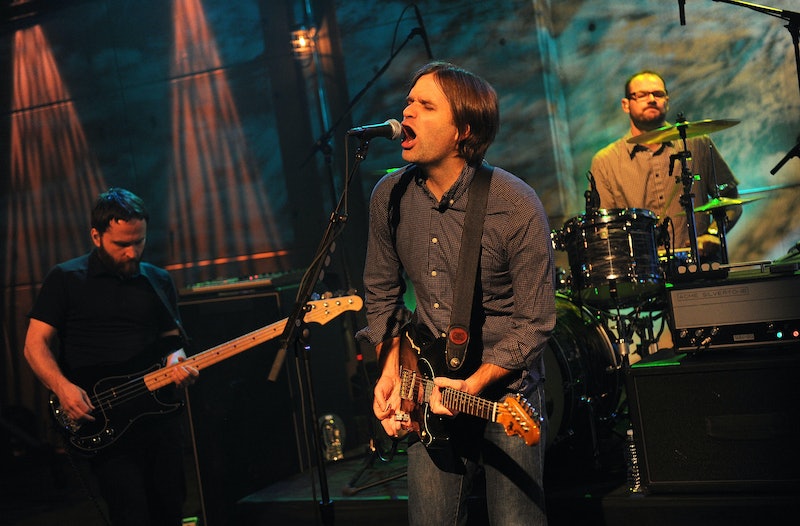 Here are some things to look forward to this spring: snow will melt, flowers bloom, seasonal allergies will go wild (I'm kidding about that one, obviously. Allergies can suck an egg), and beloved indie rock outfit Death Cab for Cutie will drop their eighth album. YESSSSS! Kintsugi, the band’s first album since Chris Walla’s departure, will make its way onto physical shelves and into e-record stores on March 31, 2015.

So, what's the meaning behind the title? “[Kintsugi is] a Japanese style of art where they take fractured, broken ceramics and put them back together with very obvious, real gold,” bassist Nick Harmer explains in an interview with Rolling Stone. “It's making the repair of an object a visual part of its history.” Harmer adds that the "repair of it, the damage of it, is more important as part of the history of something than repairing it to its original state."

Let that gold glue show. In the aforementioned Rolling Stone interview, frontman Ben Gibbard says the following about Walla's leaving the band and how fans should approach the new album:

This is an opportunity for the band to become something it could only become by losing a founding member. It's our goal to make records that rank amongst the best work we've ever done. I completely respect and understand why people love Transatlanticism or We Have the Facts… or Narrow Stairs. And I would hope that as we move forward, people listen with as little prejudice as they can and try to hear the music for what it is and not what they want it to be.

Man, I am ITCHIN' to hear Kintsugi. Alas, we still have two months to go. To sate the appetite of my ears and my heart until it drops, I’ve created a playlist. It's a Death Cab pump up mix. An I Just Want to Feel Feelings playlist. Feeling feelings is how I get pumped up for Death Cab. Ready? 3...2...1... LET'S SOB!

Like a knife to the gut right out the gate.

“Why You’d Want To Live Here”

I always imagine the tectonic plates buckling whenever I hear: “The Greyhounds keep coming/Dumping locusts into the street/Until the gutters overflow/And Los Angeles thinks, “I might explode someday soon.” Bums me out.

“Brothers On A Hotel Bed”

One time, I caught myself crying listening to this on an airplane. I still feel weird about it.

This belongs in the version of Grease where Sandy Olsson and Danny Zuko run into each other at Rydell High after a whirlwind summer and are like, "Oh, crap."

Oh, you know, just a cheery song about a woman who's marrying someone she doesn't want to marry.

Two more sad wedding songs. Ugh, the transition from one track into the next gets me EVERY TIME.

OK, if there was a Jock Jams-style compilation of songs that tug at the heartstrings, "I Will Follow You Into The Dark" would be the "Whoomp! (There It Is)" of that CD.

Uff da. May the tears be with you!