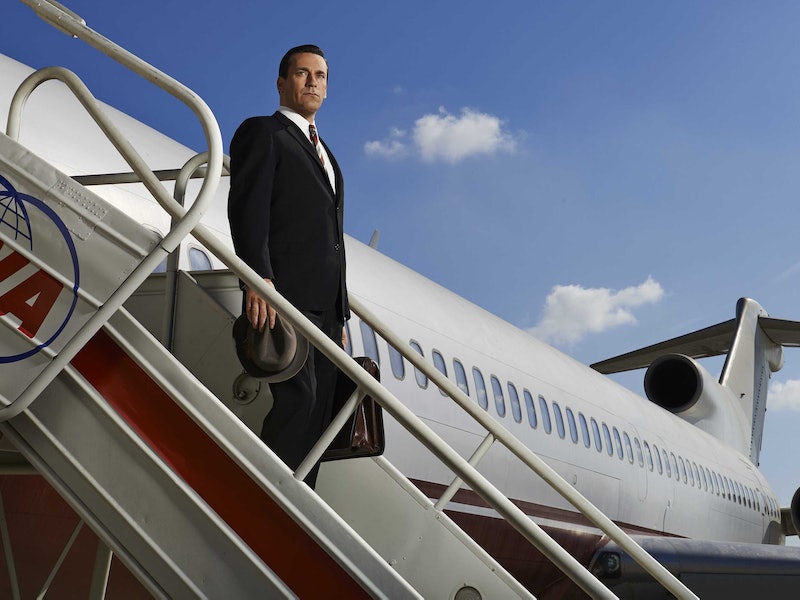 The long era of Mad Men is coming to an end. On Monday, AMC announced the final episodes of Mad Men will air this April, closing the door on Don Draper Dick Whitman. Or perhaps to echo a theme from the iconic period piece that's been a slow burn since 2007, Don Draper will be shutting the door and having a seat... forever.

Mad Men might seem like a show about a bunch of well-suited sleazy men selling cigarettes and lipstick, but the character development, costumes, symbolism, and set design are what make it so great. Naturally when a series is coming to an imminent and bittersweet end, the first task at hand is to rewatch all the previous episodes, scouring for missed clues and callbacks and foreshadowing. And just because Mad Men is Serious Television Drama doesn't mean that are moments in the pilot that make us go "What?!" Here are 13 moments from the Mad Men pilot, "Smoke Gets in Your Eyes," that you might want to look out for the second time around.

The Back of Hamm's Head

That cheeky bastard Matthew Weiner. The first image we see of Don Draper is the back of his head, mirroring the opening credits. Who IS this man?!

Speaking of sassy symbolism, there's also a shot from the top of Sterling Cooper's building that shows the sheer face of the glass walls all the way to the ground, a nauseating bird's eye shot that makes you feel like falling all the way down to Madison Ave. Again, just like the intro! The foreshadowing is aggressive.

We know now, looking back, that Peggy gets her hair game together, but these piece-y bangs make me want to give her a big hug and a blowdryer.

Pete Campbell, that slimy little weasel. The greatest revenge that time in the Mad Men universe took on ol' philandering Peter was pushing that hairline way, way back into the abyss. In Season 1 (top) his hairline is still intact, and he looks like just another snot-nose from a Norman Rockwell painting; Season 7 has him looking like Jimmy Neutron.

By this point we're all well aware that Don Draper is a maverick in the ad game, and by that I mean he kind of doesn't give a crap about anything but showing off. He's since curbed his alcoholism, but in the first season it's over the limit and out of control, and the combination of drinking on the job, and spending the night having wild sex with that beatnik Midge, really called for the first of what would be hundreds of OFFICE NAPS. A nap, at the office. What a time it was.

And Quit Being a Baby

Don's known for being a charmer and a smooth talker despite his glaring asshole tendencies and total lack of loyalty or reliability. But he's just so handsome, and we could listen to him talk about Kodak Carousels all day! But in "Smoke Gets In Your Eyes," there are several moments when suave DD is a total whiny baby. After he and Midge have some afternoon delight, he's like, "Let's get married." And later in the meeting with Rachel Menken about her father's department store, Don leaves in a huff saying "I won't let a woman talk to me like this" after Rachel says a normal human sentence to him. Quit sulking, Draper! Maybe you do need all those naps cause you sure are cranky.

Signs of the Times

Joan shows Peggy around the office and asks her to brace herself and not get too overwhelmed with the technology — which is a typewriter. To be fair, though, I can barely use a typewriter now, and it's probably harder to operate than my Macbook, which is basically a Fischer Price toy for adults.

The Sad and Familiar State of Women's Healthcare

There's an awful scene where Peggy visits a gynecologist to get birth control. She gets compltely slut-shamed while her legs are in the stirrups. Some of the more icky comments from her male doctor about Peggy's decision to use contraception include: "I will take you off this medicine if you abuse it. It's $11 a month, but don't think that means you need to become the town pump in order to get your money's worth." Good thing everything has changed for reproductive rights in America, right?!

Is that Kristin Schall as one of the Sterling Cooper telephone operators?! You're damn right it is.

I would just like to publicly apologize for ever disliking Betty Draper,which I did for a few seasons. Until I woke up and realized her life sucks and she's just trying to make the most of a bad situation being married to a bad man. The first shot we see of Betty is everything she is — turning on a light next to her bed when Don comes home super late, hair and makeup perfectly done, outfitted in a peach nightgown that's so fancy I would have worn it to my senior prom. RUN BETTY! DON'S THE WORST!

One of the best things of MANY best things about Mad Men is the music, and "Little Band of Gold," the very first song we hear on the series, is such a beautiful bop. Give it a listen.

My GOD, the first moment we meet Joan Holloway is electric. She's a bitch in the best way possible, and as she's showing Peggy around the office it's pretty clear that everyone fears her. She says some pretty nasty but well-meaning stuff to Peggy, most cutting is the advice for Peggy to cover her face with a paper bag and count all her flaws in the mirror. But hey, that's Joanie's weird, special way of looking out for the girls. Watching again, you'll notice she says to Peggy, who lives in Bay Ridge in Season 1, "In a couple of years with the right moves, you'll be in the city with the rest of us." How right she was.

Rust Cohle Ain't Got Nothing on Don Draper

Matthew McConaughey might have perplexed us all with his nihilistic musings and diatribes on True Detective, but damn, Don Draper could give him a run for his money. Some somber thoughts he voices in the first episode alone, that make the people around him mad uncomfortable: "People have been smoking cigarettes since before Freud was born; love is something guys like me invented to sell nylons; you're born alone and you die alone." Chill out, Drapes! Have a drink! JK, you're already soaked through.