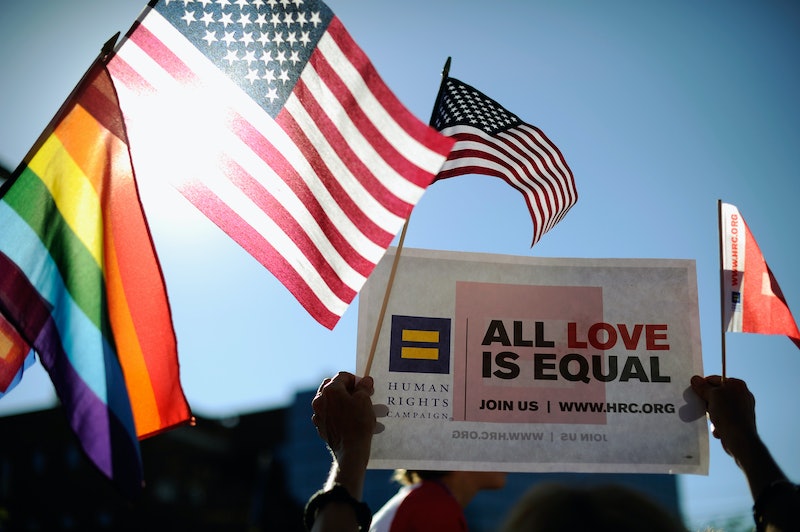 A federal judge declared on Monday that South Dakota's same-sex marriage ban is unconstitutional. But though U.S. District Court Judge Karen Schreier wrote in her opinion that the six couples who filed the lawsuit seeking to overturn the ban "have the fundamental right to marry," it's not quite time to order the cake and flowers. Judge Schreier stayed the decision, effectively putting it on hold pending an appeal.

According to an interpretation by the Human Rights Coalition, the judge's summary judgment indicates that she believes the plaintiffs in the case are being harmed by the law. The judge wrote in her decision that "the ongoing denial of a constitutional right constitutes irreparable harm to plaintiffs."

South Dakota isn't regarded as the most conservative of red states, but voters did pass a constitutional amendment in 2006 that outlawed any version of gay marriage, even if it was called a domestic partnership or civil union. Plus, research shows young Republicans are pro-gay marriage, even if the older members of the GOP are still fighting it.

Five of the six couples who filed the suit in Sioux Falls in May have already married in other states, according to the Associated Press. One of the couples, Nancy and Jennie Rosenbrahn, live in Rapid City, South Dakota, and according to the lawsuit, have "endured indignity and humiliation" as a result of their marriage not being recognized in their home state. The couple married in Minnesota, but if Jennie dies, Nancy might not be able to inherit the home the couple lives in. The Rosenbrahns have numerous children and grandchildren, the lawsuit states, and have lived together for 30 years.

The lawyer who filed the lawsuit told the AP that not only did the Rosenbrahns want to challenge South Dakota's ban, they're also challenging South Dakota's refusal to not recognize same-sex marriages performed in other states.

The defendants in the case, including Attorney General Marty Jackley, argued that allowing gay marriage was a "slippery slope," and pulled out the tired comparison between gay marriage and incest or polygamy. Judge Schreier was not having it:

This court is not persuaded that adhering to long-standing Supreme Court precedent and defining the right at issue here as a fundamental right to marriage will curtail South Dakota’s ability to otherwise regulate marriage in ways that do not interfere with constitutionally protected interests.

For his part, Jackley said the state will appeal the decision to the 8th U.S. Court of Appeals, which The New York Times notes affirmed Nebraska's ban on same sex marriage in 2006.