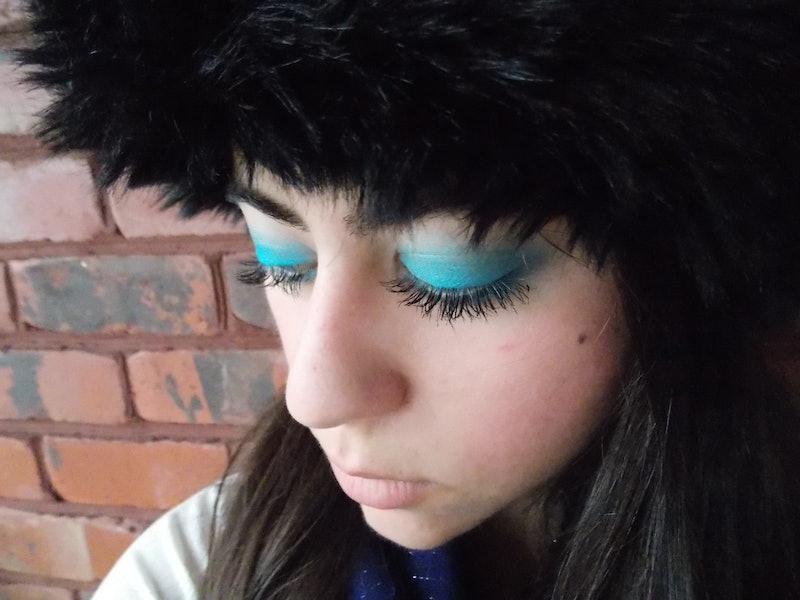 Many redeemable, aesthetic things come in the color blue. It is a popular color that normally doesn’t seem to offend anyone to the degree of, say, orange. Nor does it anger to the degree of red or depress to the level of black. So why does it have such a bad rep when applied to makeup? Consider Katy Perry’s “Last Friday Night” video, in which a girl evolves from a typical nerdy teenager to an '80s workout heartthrob with a pair of spandex shorts, a colorful bomber jacket and, of course, layers of bright blue eyeshadow. While the video is obviously inspired by the gaudy, electric fashions of the decade known for its colorful styling, the depiction ties back into the revolution of rich hues in makeup pigments. While it may a little late in the game, blue — particularly in cosmetics — is making a comeback whether we like it or not.

While Perry’s throwback to the '80s definitely opened the door to some blue possibilities, the color really stood out when featured on world class runways. At Marc by Marc Jacobs’ Spring 2014 show, model’s donned a deep blue on their lids with rough edges and hardly any blending, and models at Badgley Mischka followed suit but in a lighter blue during the same season. Makeup Artist Kevyn Aucoin then created winged bright blue eyeshadow at Honor’s spring 2015 show. And celebrities seem to like it too, because Ginnifer Goodwin rocked bright blue shadow at the 2011 Met Gala and Scarlett Johannson did a smokey eye version at the premiere of Captain America: The Winter Soldier last March in Paris, France.

I am neither a model nor a celebrity, but the blue eyeshadow trend really appeals to me. Not because I’m looking to rock some spandex and crimped hair, but because it seems like a pretty and daring alternative to a staple in my everyday beauty routine. While I’m not usually the person to take risks with my makeup (sorry, Kylie Jenner, but no crazy lips for me), I was fascinated enough by blue eyeshadow to see how it was received in an average person’s everyday life.

My makeup bag contains a lot of neutral hues, and I’m most often reaching for the infamous Naked 3 Palette, usually sticking to the subtle matte colors in the lighter end of the collection. Like I said, I’m not much of a risk taker when it comes to makeup (it’s a different story when it comes to my style, as you may have guessed from my hat in the photos!). And the thing that is particularly difficult about blue eyeshadow is that it’s just so easy to get wrong.

Trends are trends for a reason, and that is true for not only fashion, but also makeup. While a smokey eye may never go out of style, something as bright and uncommon as blue eyeshadow might. Plus, it has a better chance of being cast off as a terrible disaster than a choice of personal expression — which is what it should really boil down to but hardly ever does. In my case, I wanted to step out of my comfort zone to test how blue eyeshadow played out in reality and not on a stage, red carpet or in front of a camera.

The day before I went about town with my brown eyes lined and shadowed in a bright blue color, I hypothesized the reactions I might get. I am aware that blue eyeshadow is unusual and often perceived as odd, but I know it can be pretty and complimentary as well, as witnessed by the work done by professional MUAs on runways and for celebrity clients. I figured I would probably get stared at, and I guessed I may receive some snarky comments. But I really wanted to know if the people I came across would respond as positively to the hue as we've done when the shadow makes a runway appearance — just to test the overall likeliness that a global makeup trend could translate into the average citizen’s daily routine.

I knew if I was going to get any reactions at all, I had to fully commit to the experience. So, pulling inspiration from the aforementioned Marc by Marc Jacobs’ show, I covered both my lids and my lower lash lines in a bright blue color. The shade I used, Urban Decay in Peace, is both pigmented and thick. I applied it with a short, stubby brush and packed it on the lid and under my lower lashes. To help blend it out with a soft fluffy brush, I added a matte cream transition color. To intensify the color, I lined my inner waterline with a nude pencil, giving the look of wider and whiter eyes. Lastly, I coated my lashes in mascara and kept them long and dark against the bright blue.

By the end of the application, I figured I would feel ridiculous considering that’s how I thought I would look. Surprisingly though, after I took a step back from my mirror that I was inches away from (mind you, with my mouth wide open during the whole application process), I actually liked the look. Yes, it was bright and admittedly a little obnoxious. But it was pretty empowering to try something so different and let everyone know, because it was in such a visible place — my eyes. Plus, my big brown eyes were brighter than ever against such a different color; any dark shadow typically makes my peepers look smaller than they actually are.

And because I felt more like Cleopatra and less like a clown, I went about my day with bright blue shadowed eyes.

I met my mother for breakfast, and before she could even respond to my “good morning,” she commented on my new look.

Naturally, mothers have something of a right to be judgmental. They are the people who birthed us, after all.

After breakfast I drove downtown to attend classes, but met with my friend Rebecca before to run some errands around campus. She neglected to say anything about my cerulean lids. After a while, I asked her straight up and this was her reply:

Rebecca: I was going to say something.

Then, I met with another friend named Samantha. Samantha let me in on a secret.

When I confronted my friend Robert about it, he said he wasn’t “phased.” Maybe my previous fashion choices have skewed his opinion, though.

Sitting in class, my friends Cortney and Liv both agreed it wasn’t for their everyday lives, but that maybe they would try blue eyeshadow for special occasions.

Cortney: I think it’s pretty, I just wouldn’t wear it to work.Liv: Yeah, it’s electric and eclectic, but maybe best for a night out.

And although I didn’t see him that day, my boyfriend didn’t seem too thrilled at the thought of me wearing blue eyeshadow.

Boyfriend: You don’t need all that, I like you all natural.

So, the big question is: Does blue eyeshadow work in real life? After reading this, I can probably guess what you’re thinking. You’re either asking, “Should I go out and buy some blue eyeshadow? Why didn’t I know about this makeup trend before?” Or you’re thinking, “Why would anyone on earth wear blue eyeshadow. It looks terrible.”

Truthfully, my conclusions lie somewhere in between both of those opinions. After this experiment, I realized that makeup trends do not always translate to real life, but they’re always worth a try. Like my friend Cortney said, blue eyeshadow is pretty but not necessarily appropriate for work or professional endeavors (sorry, Katy Perry). Furthermore, I agree with my friend Liv when she said it’s probably better suited for a night out on the town.

While that may explain some of the odd looks I got when walking downtown, I’m very much an advocate for trying new things and seeing how they work for one's overall individual expression. I’m not usually one for bright eyeshadows, for instance, but I did have a brighter disposition when wearing this color. And though I may not convert to wearing the bright blue eyeshadow on a daily basis, I may reach for it on special occasions or when going out.

My experience has taught me that not everyone will appreciate makeup trends, and blue eyeshadow is definitely one of the more daring ones currently out there. I was never exactly complimented for wearing the shade, but I didn’t have an utterly bad experience either.

Bottom line: Blue eyeshadow isn’t for everyone, or for every day. But don’t knock it ‘till you try it.