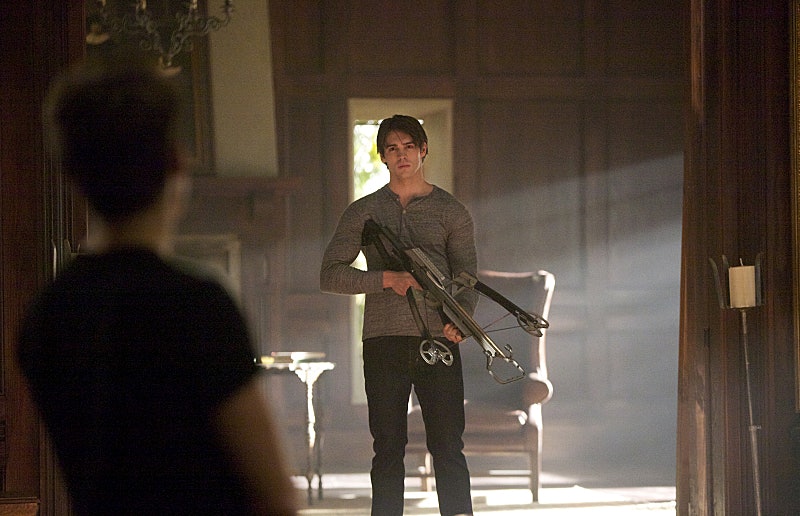 Say goodbye to Jeremy Gilbert — for real this time. After five seasons of watching him die over and over again and wondering how many times Julie Plec could get away with killing him, Steven R. McQueen is leaving The Vampire Diaries in 2015. Plec confirmed to The Hollywood Reporter that McQueen's final appearance on TVD will be during episode 614 and then that's it. Obviously I'm sad about losing McQueen, even if Jeremy's kind of been the worst this season. But the most important question in my TVD-addled mind is how will he go out this time? Jeremy Gilbert has already died five times on TVD , would Julie Plec actually kill him again?

Plec told THR that the episode leading up to Jeremy's final moments on TVD "will be him grappling with whether or not it’s time for him to say goodbye to Mystic Falls." But why now after all of this time? Apparently, every season Plec and her team of ruthless writers look at each character on TVD and decide which ones are "ready to move on, whether to better things in life or to the Great Beyond." And, in Season 6, Jeremy's number is finally up — yes, for real this time.

According to Plec, Jeremy's finally grown into a man on TVD and after suffering countless neck-snappings over the past five seasons, it's time for him to "start a fresh new life — with a twist." I mean, as if we expected anything less than a twist from TVD — you're not fooling any of us, Julie Plec. So, how will The Vampire Diaries write McQueen and Elena's little brother off the series? More likely than not, it's going to include some variation of death because, Jeremy Gilbert.

Jeremy Will Sacrifice Himself to Free Bonnie

He may think he's given up on Bonnie's return, but we all know that Jeremy didn't spend months calling his dead girlfriend's voicemail to leave angry messages just to give up. An opportunity might present itself where Jeremy could die to complete a spell that would release Bonnie from that supernatural '90s prison. And he will absolutely sacrifice himself for her because love, obviously.

Jeremy Will Die to Be with Bonnie

Giving Jeremy a "fresh new life — with a twist," could absolutely mean that Jeremy is moving onto the Great Beyond to be with Bonnie. Which would be an easy way to both write Jeremy and Bonnie off TVD for the foreseeable future. And, I mean, the twist would obviously be that he still gets to live, just as a dead man somewhere on the Other Side. I'm onto your games, Julie Plec.

I mean, we've seen it happen five times before — it could happen again. A senseless and merciless killing could be Jeremy's end because, really, what could be more fitting than that?

Jeremy Will Move Out West to Pursue a Career In Baseball

Remember when Jeremy was sent away when the Original family came to Mystic Falls and he'd moved out to Colorado and started playing baseball when Kol found him? What if that compulsion stuck a little to the back of Jeremy's mind and he decided to pursue that career or become a coach — at the very least, his supernatural Hunter strength would come in handy.

Just one more way Jeremy could die on TVD Season 6 — Kai already has Elena captive, let's just say she escapes and manages to thwart his will, he'll come after Jeremy. I mean, we know that Kai is a raging lunatic that's so down with killing his own siblings, why stop there? He could also kill Elena's brother.

More like this
Will Vampire In The Garden Get A Season 2? What To Know
By Kadin Burnett
20 Photos From The 'Stranger Things' Season 4 Premiere To Make You Feel Old
By Alyssa Lapid
Marvel's 'She-Hulk' Trailer Is Finally Here & The Hulk Lends A Big Helping Hand
By Grace Wehniainen
Everything To Know About Marvel's 'Echo' Series On Disney+
By Grace Wehniainen
Get Even More From Bustle — Sign Up For The Newsletter