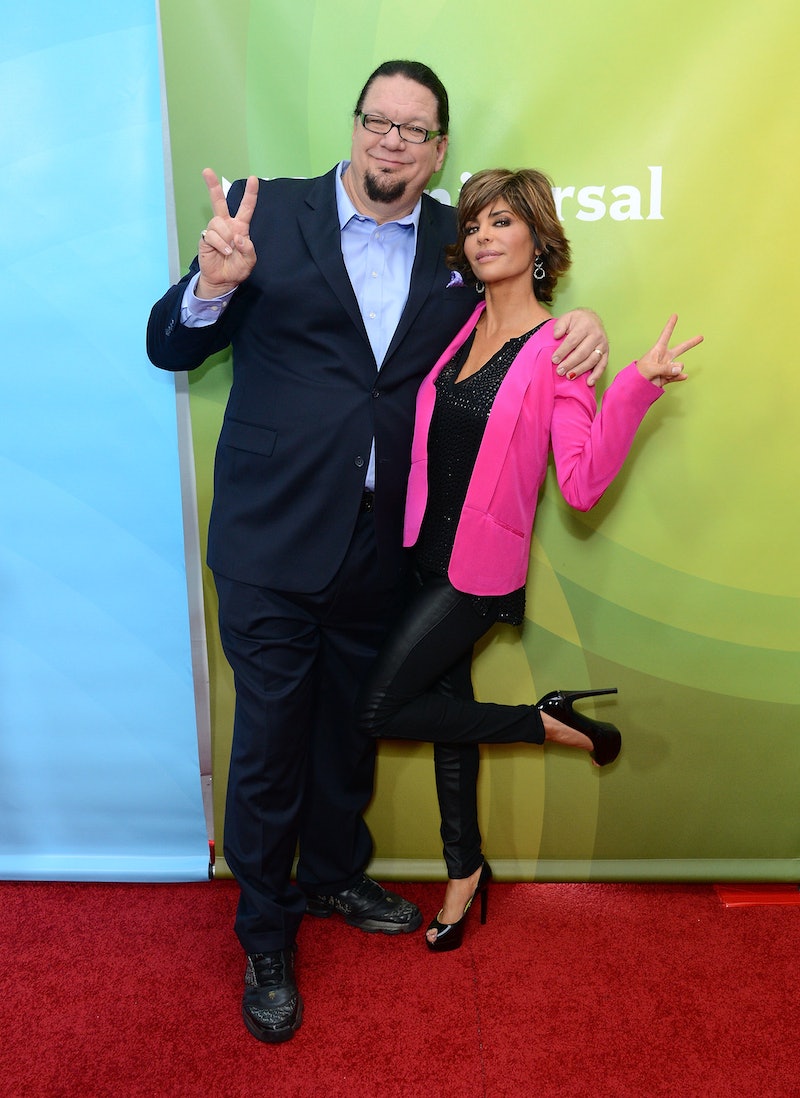 Now that we've got two — count 'em — two genuine Hollywood actresses on The Real Housewives of Beverly Hills , you better believe we're going to visit a set or two. We already went to work with Eileen Davidson as she filmed an episode of The Young and the Restless. Now in the upcoming Jan. 13 episode of RHOBH, we get to follow Lisa Rinna as she films a movie, and it's with none other than her husband Harry Hamlin and famed magician Penn Jillette, too.

There's no official cast list yet, but it looks like we'll be seeing Lisa and Harry shoot Penn's indie film Director's Cut during the upcoming episode of RHOBH. That's the film Penn was shooting at the end of the summer and the beginning of the fall last year, plus Lisa snapped this photo of Harry and Penn on the set of the film.

You might be thinking to yourself, "Well, that sounds like the weirdest movie ever made," and you'd be right! Director's Cut is a horror-thriller-satire-meta-comedy whose DVD director's commentary quickly reveals itself to be that of an obsessed fan (Penn), whose donor perk for helping to crowdfund a film is to visit the set where the actress he is obsessed with (Missi Pyle) will be filming. The fan ends up kidnapping the actress and forces her to act out his favorite movie... for her life.

The meta part of this movie comes from the fact that it was successfully crowdfunded on FundAnything in the fall of 2013. The campaign raised nearly $1.2 million in just six weeks. In fact, Lisa and Harry may have inspired you or others to shell out some cash for this movie. The couple filmed a short video basically explaining why Penn, who used to be such a nice guy, is now a jerk. I suppose this was in an effort to convince us all that Penn could play a devious, psychopathic fan in Director's Cut. Clearly it worked.

But don't worry. Lisa, Harry, and Penn are actually besties. You may recall that Lisa and Penn appeared on Season 6's All-Star edition of The Celebrity Apprentice. Lisa and Harry also attended Penn and Teller's Hollywood Walk of Fame ceremony back in April 2013. Wow, Lisa really is a pro at this sort of thing.

It's unclear exactly what roles Lisa and Harry will play in Director's Cut, but considering that Penn and Missi are the stars of the film, they will most likely have some random cameo. Maybe they'll even provide some comic relief. All you have to do is watch Penn's four-minute FundAnything video describing the project to know that this film could definitely use some.