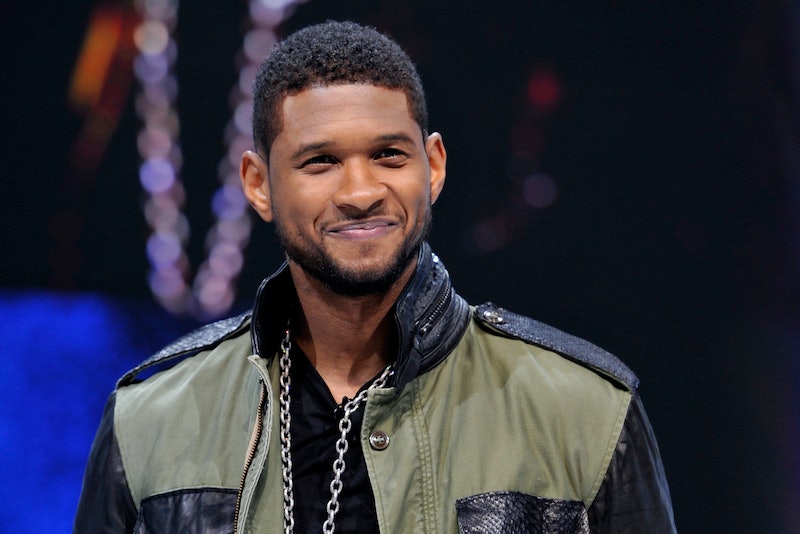 Congrats are in order for Usher! According to sources who spoke with Us Weekly, Usher is engaged to Grace Miguel, his girlfriend and business partner. If this news is surprising, that's probably because you didn't even realize Usher had a girlfriend. Well, these two just do a great job of keeping things on the down low and out of the media spotlight apparently, because they've been together since 2009.

As a source told Us Weekly, "She's happy but they're trying to keep it quiet." Hmm. No surprises there. Apparently, Miguel has already been spotted with a freakin' gigantic engagement ring — so big that a "spy" for Page Six told the newspaper back on Jan. 3, "It’s a huge diamond... You wouldn’t think it was an engagement ring because it’s so big, but it could be one." Well, sounds like it really is an engagement ring now.

So who exactly is Grace Miguel? As reported by Heavy.com, she once managed Usher and now works with his New Look Foundation which, according to the charity's official website, "is dedicated to bridging the gap between despair and success for young people all over the world" through the use of mentors and positive role models. Sounds like a good gig!

Now, there's still no word from Usher or Miguel about whether they are, in fact, engaged. But if you're curious to see that "engagement ring" anyway, here ya go. Be careful, the sheer size of it may shock you.

More like this
Harry Styles Addresses The Theory That His New Song "Daylight" Is About Taylor Swift
By Jake Viswanath
Joe Alwyn Reacts To Taylor Swift Earning An NYU Doctorate In A Rare Interview
By Jake Viswanath and Nicole Pomarico
Is Megan Fox Pregnant? MGK Gave A Shout-Out To Their “Unborn Child” Onstage
By Hugh McIntyre
Rebekah Vardy & Coleen Rooney’s Trial Has Officially Begun
By Bustle UK
Get Even More From Bustle — Sign Up For The Newsletter