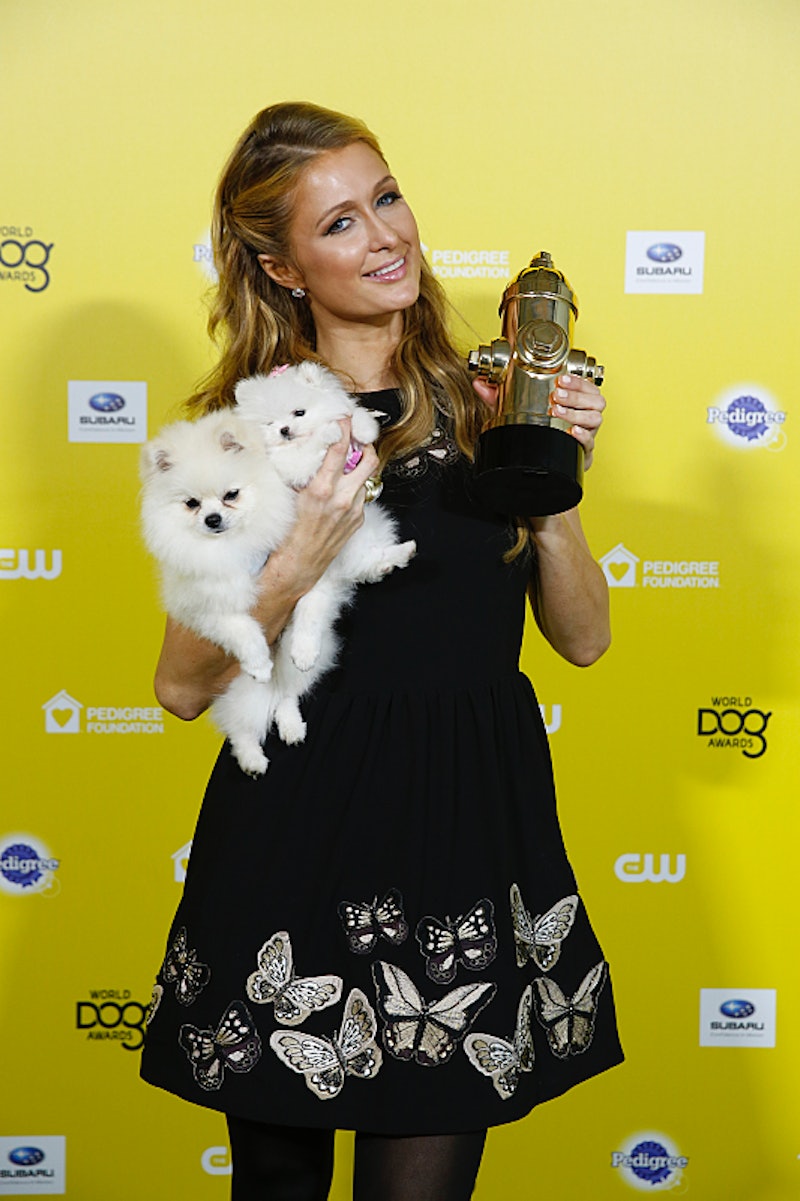 It's a great honor to be nominated, but isn't it more satisfying to win and take home the gold? You bet. I'm not trying to squash the achievement of the many nominees this awards season, but you know that saying "Second place is first loser" — well, sadly it's true unless you've got the hardware to back it up. This is even true for The CW's inaugural World Dog Awards, airing Thursday night. Many pups were nominated and in attendance, but only the best and most loyal of man's best friend were allowed to take home the ultimate prize: A really shiny fire hydrant statue.

I'm sure the doggie will also receive bragging rights, a big ol' treat from their owner(s), and a pat on the head. According to The Associated Press, all attendees will also get a pretty great swag bag. They've already received tons of attention and stole the show on the green grass carpet last weekend, when the World Dog Awards were taped in the Barker Hangar of Santa Monica Airport in Los Angeles on Jan. 10. But in order to find out which pups took home the ultimate prizes in categories like Best in Film, Top TV Dog, Dog of The Year, Most Pawpular, Hot Dog, and America’s Top Mutt, you'll have to tune in on Thursday night to watch the ceremony, hosted by comedian George Lopez.

So, which famous doggies walked the green grass carpet? Check out some of them below.

Named for baseball legend Hank Aaron, little Hank was a stray pup with big dreams of finding a home base — and he did, with the Milwaukee Brewers MLB team. He found his way to their Spring Training facility in Arizona and just starting chilling with the team. Little Hank soon became the team's training mascot and they gave him his own uniform — and got him his shots from the vet. Because health and safety come first.

At the World Dog Awards, Hank is up for the Dog of the Year prize and donned a cute little doggie tuxedo for the occasion.

There's a World's Ugliest Dog contest and Peanut took home that prize in 2014. Poor thing, he's beautiful just the way he is! And more so after Jimmy Kimmel tries to give him a makeover. But this year Peanut is up for Dog of the Year, so hopefully he'll take home the more self-esteem boosting trophy on Thursday night.

Duke, the Mayor of Cormorant, Minn.

Pack it up, folks. Give it up now, because none of us may ever be as accomplished as Duke, the 7-year-old dog who was elected to be mayor of a town in Minnesota last August, according to the town's local ABC affiliate. Yeah, the village's population is 12 and he's technically the honorary mayor, but the pup won the election fair and square. Duke gets paid in a year's worth of kibble for his service and a really cool sash that says "Mayor."

“What he does is when the cars are coming through town, they're hitting town at 50 miles per hour, and he slows them down," Cormorant resident David Rick told ABC. Sounds like Duke is quite a leader.

More like this
Jake Daniels Just Became The UK’s First Active Football Player To Come Out As Gay Since 1990
By Sam Ramsden
What Is Jeanie Buss' Net Worth? The Lakers President Is Uber Rich
By Hugh McIntyre
Trace Is Dropping Ominous Hints About 'The Temptation' Island Reunion
By Kadin Burnett
Kim Kardashian Remembers Her Last Words To Death Row Victim Brandon Bernard
By Jake Viswanath
Get Even More From Bustle — Sign Up For The Newsletter