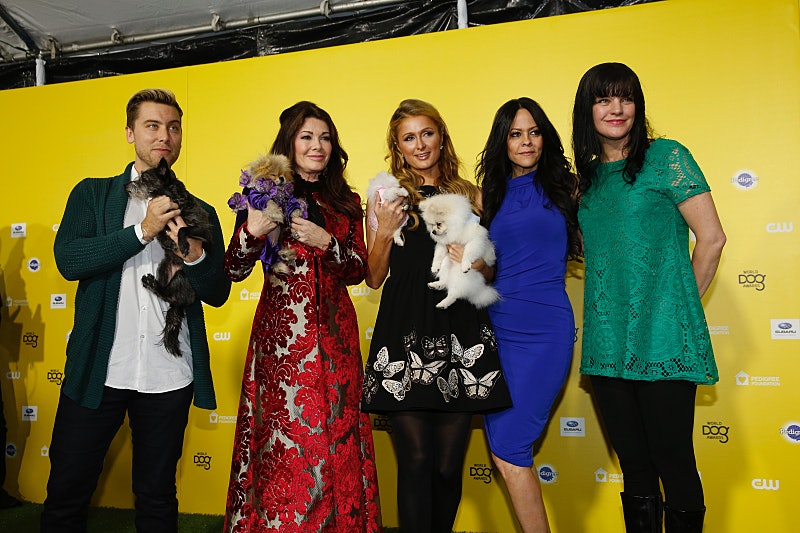 Sure, it's awards season and it seems like there's an award for everything out there. Acting, writing, directing, sound editing, cinematography...and dogs? I'm not talking about the Westminster Dog Show, either. The CW will be airing the inaugural World Dog Awards, premiering Thursday night. This brand new accolade is designed to honor — who else? — man's best friend and the animal's wealth of contributions to society in entertainment, the military, health services, and just being so darn cuddly. Comedian George Lopez is hosting the event and will surely get to pet some hounds who have more bark than bite. And it's your votes that crowned the winners.

Online voting took place from Dec. 15 until Jan. 9 (sorry if we're just telling you now). The World Dog Awards were taped on Jan. 10th at the Barker Hangar (get it?) at Santa Monica Airport in Los Angeles. Yup, sadly the World Dog Awards won't be broadcast live into your living room like the Golden Globes or the Screen Actors Guild Awards, but hey, you'll still get to see which adorable pups take home awards like Best in Film, Top TV Dog, Dog of The Year, Most Pawpular, Hot Dog, and America’s Top Mutt. So which one of these categories did your votes directly contribute to? Let's take a look at some of them.

Pun intended, by not by me — blame the World Dog Awards. This fan-voted crown goes to the canine with the most influential social media presence. Because if Grumpy Cat and Keyboard Cat can be crazy popular memes, then doggies can definitely take over Twitter, Instagram, Facebook, too, right?

I can image Boo, the dog with 17 million fans on Facebook, had to be in the running. I mean, look how adorable that little mutt is!

Dogs are lucky enough to have so much energy that I wish I could bottle it. But alas, I can't. The World Dog Awards, though, knows that this energy lets canines be super athletic and compete in the extreme sports we only wish we could. And that's what the Hot Dog award salutes — the most talented extreme sports pup.

I mean, dogs are base-jumping now (see video above). What'll they do next?

Because our feline friends shall not be forgotten, even during an awards show for doggies. This statue will be bestowed upon the most dog-like cat, which I guess means it'll be the cat who shows the least indifference, has the most energy, and barks instead of meows (hey, they exist — see the video above). Seriously though, I know there are some cute, energetic, and active kitties out there.