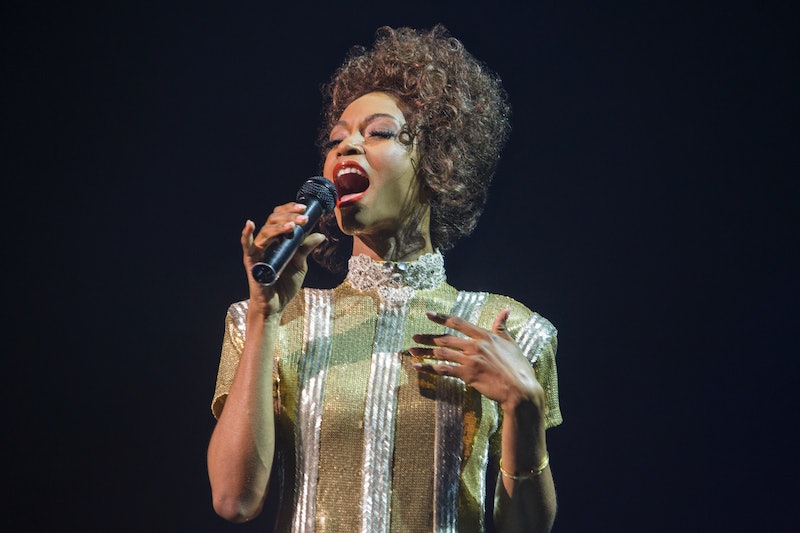 As we all know, Lifetime loves to bring its audience controversial TV biopics, depicting the (mostly) true events of the life and times of deceased celebrities. And that's often without the blessing of the families or those close to said celeb, which becomes challenging. Aaliyah's family did not approve of the Aaliyah: Princess of R&B telefilm last fall, which meant the network wasn't able to get the rights to the late singer's music catalog. The network's latest biopic, Whitney, focuses on Whitney Houston, and is not condoned by the late star's family. However unlike Aaliyah, Houston's music will be featured in Whitney , just not as performed by the legendary singer. Instead, Deborah Cox will sing Houston's classics.

Cox is a Grammy-nominated voice best known for her 1998 hit song "Nobody's Supposed to Be Here" and her starring roles in Broadway's Aida and Jekyll & Hyde. Cox had also recorded a song called "Same Script, Different Cast" with Houston herself in 2000. As reported by Billboard, Whitney director Angela Bassett had approached Cox, a friend of hers, about re-recording some of the songs. And the 40-year-old Canadian R&B artist knew she had big shoes to fill when it came to Houston's amazing voice.

"The key was to sing in a tone as close to Whitney’s as possible, purely from the heart," Cox told Billboard. "None of Deborah Cox seeped into the performances. I have a little more of a cry in my tone when I sing certain things; her tone is round and warm. It was about creating the essence of her."

Here are three Houston classics you can listen for in the movie and determine for yourself if Cox hits all the right notes.

"Greatest Love Of All"

Believe it or not, this signature Houston song — which was recorded for her debut self-titled album that was released in 1985 — is actually a cover. George Benson originally recorded the song for a Muhammad Ali biopic in 1977 called The Greatest. "Greatest Love of All" was initially released as a B-side — and still blew up on the charts.

"Greatest Love of All" spent three weeks at No. 1 on the Billboard Hot 100 Chart in 1986. "She starts off cautious and contained, singing the song as written and enunciating the words clearly," Rolling Stone's Don Shewey wrote in 1985 about the song. "Then, gradually, as the lyrics repeat, she lets go a little, slowly pours on the soul, slips in some churchy phrasing, holds notes a little longer and shows off her glorious voice — yet she always leave you with the tantalizing sensation of something held back."

"I Will Always Love You"

Yeah, this song is a cover, too, but like "Greatest Love of All," Houston absolutely owned it. "I Will Always Love You" may have been originally recorded by Dolly Parton, but Houston's 1992 version is one of the best-selling singles of all time. It accompanied Houston's feature film debut in The Bodyguard, but the soundtrack did a lot better than the movie fared.

Houston wasn't all just movie soundtracks and covers — her original songs are pretty great, too. Take my personal favorite, which is from her 1990 album of the same name. L.A. Reid and Babyface wrote and produced the Grammy-nominated "I'm Your Baby Tonight," which became her eighth No. 1 hit on the Billboard charts. Listen and you won't be disappointed.