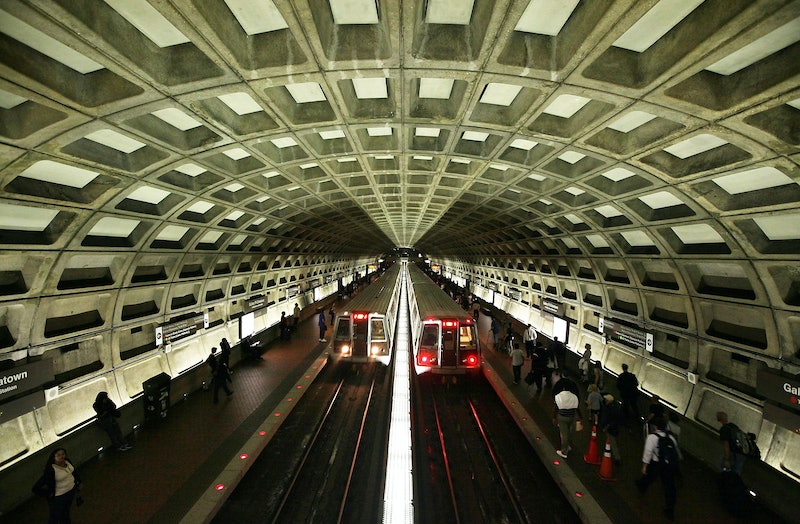 Riders on the Washington, D.C. metro had quite the frightening commute on Monday when the L'Enfant Plaza Station filled up with mysterious smoke. According to CNN, the overpowering smoke killed one passenger, named by WUSA-9 as Carol Glover, and critically injured at least two others. More than 80 people were also treated for smoke inhalation and other injuries.

The smoke — most likely stemming from an electrical malfunction — in the downtown D.C. station quickly intensified Monday afternoon, forcing passengers to self-evacuate their trains. The Washington, D.C. Fire and EMS Department confirmed via Twitter that more than 200 passengers were evacuated from L'Enfant Plaza, while 84 people were transported to local hospitals for treatment. A firefighter was among the injured, with serious yet non-life threatening injuries, the department said.

Transportation officials are still investigating what caused the heavy smoke, which completely consumed the bustling station. Passengers and eyewitnesses told the media they saw sparks fly in front of a yellow-line train bound for Northern Virginia. However, transportation officials told reporters on Monday that there were no fires on the train or in the station, nor did any trains derail.

In a statement on Monday, the Washington Metropolitan Area Transit Authority said it could not determine the source of the smoke. "Metro has activated tunnel fans to ventilate the area," the transit authority added.

As investigators try to piece together what happened in L'Enfant Plaza, the yellow line remains suspended on Tuesday.

The National Transportation Safety Board has been tasked with probing the incident, and was on the scene almost immediately on Monday. So far, the NTSB said in a statement that it looked like an "an electrical arcing event" in connection with the third rail triggered the powerful smoke.

Here are some more photos from the scene at L'Enfant Plaza Station on Monday...