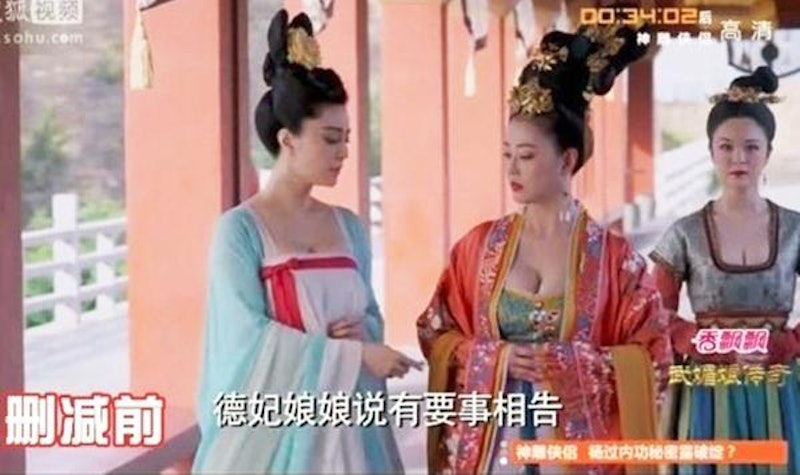 Every once in a while, the Chinese government should take a long, hard look at itself and wonder: "Are we really doing anyone any favors with all this censoring?" Regarding their latest campaign, the answer is "not at all." The Chinese government censored cleavage on the TV show The Empress of China in maybe the least inconspicuous way possible. So, the period show is about an era in Chinese history during which cleavage-baring dresses were acceptable and fashionable — and Chinese citizens saw the government's editing out of bosoms as not only rewriting history, but yet another instance of their arbitrary and authoritarian censorship practice.

The Empress of China, starring popular Chinese actress Fan Bingbing as the Tang dynasty ruler Wu Zetian, originally aired in December, but was abruptly yanked off the air due to "technical reasons," according to the state-run Xinhua news agency. A week later, the show returned to the air, except something was a little different. Every shot of Wu and the ladies in her court were not-so-subtly cropped above the chest area. So, essentially, every single frame was an awkward close-up shot of the actors.

Normally when the Chinese government censors something, like a website or a Western movie, citizens barely bat an eye. Censorship in China dates back hundreds of years to ancient times and has been a commonly exercised form of social and moral control in modern times. But when the government went after boobs, well, all bets were off.

Some pointed out that the editing rewrites China's own history. Raymond Zhou, a film critic for the state-run newspaper China Daily wrote:

All the paintings from Tang Dynasty show that Chinese ladies from that era showed a lot of cleavage. Actually, much more than in the [TV] costume drama.

According to the government's own China Daily paper, a popular article of clothing from the Tang dynasty is described as follows:

Ruqunis made up of the top jacket and long gown and a skirt on the bottom. The Tang women inherited this traditional style and developed it further, opening up the collar as far as exposing the cleavage between the breasts.

Some viewers noted that the new cropping drastically hindered the viewing experience because one could no longer see anything that happened outside the new closely cropped shot. One person wrote on the TV and film site Douban.com:

There was a scene where someone handed a fan to the other person, but I totally couldn't see the fan, only got to know what happened through the dialogue.

In some scenes that featured many people, every character's face was cut off just to avoid showing their cleavage.

On Monday, Sina Weibo (the Chinese equivalent of Twitter) released a survey that found that a whopping 95 percent of participants did not agree with the censorship. One Weibo user wrote:

Can revealing cleavage really be considered pornographic? Isn't this feudalism?

And all of this begs the question: What is the Chinese government going to censor next? If they continue in this direction, China will ban the following before we know it.

More like this
How To Fight For Reproductive Rights, Based On How Much Time You Have
By Courtney Young
The Music Industry Continues To Fail Black Women
By Precious Adesina
Sarah Everard’s Killer Wayne Couzens Is Appealing His Whole-Life Sentence
By Sophie McEvoy
Kourtney Kardashian Got Married In A Heart-Stamped Mini Dress
By Allie Fasanella
Get Even More From Bustle — Sign Up For The Newsletter