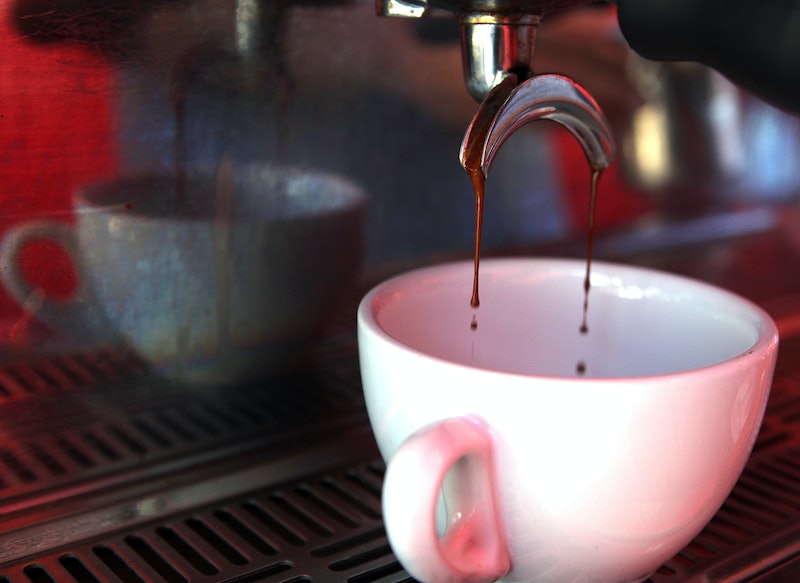 Most people need their morning dose of caffeine, administered by a steaming mug of coffee or tea. But what about using caffeine on your hair and skin to jumpstart your day? Yep, the energy boosting ingredient is well on its way to becoming the beauty product for 2015, already being added hair and skin products readily available in beauty aisles. Natural beauty gurus know this is old news — they've been making coffee face masks for years — but it's finally hit the masses.

In the beauty sector, it feels like every odd ingredient will get its 15 minutes as a passing fad until the next ingredient, like oh, I dunno, pink pepper or beer finds another purpose and has celebs and gurus singing its praises.

So, caffeine, yeah. Caffeine certainly lifts moods and apparently it lifts hair and helps skin issues, too. I'm willing to try it.

According to a Byrdie report, a 2007 study saw decent follicle growth on men who underwent caffeine-infused hair treatments. Then, a German study treated weak hair follicles of both men and women and the caffeine lead to 25 percent growth. The science is this: Caffeine stimulates growth and prevents the follicle cells from dying or being inactive. Female follicles are also shown to be more receptive. So there's all that to chew, er, drink on.

Obvious, clinical tests are needed to further understand, appreciate, and learn the real or full effects that caffeine can have on hair or on skin.

That said, caffeine is infused in a variety of products, and not solely via a coffee association, either.

I was literally JUST hipped to Kave Body Scrub, which is made of organic coffee grounds and oils. It looks dirty, but feels amazing, according to the person who used it and the marketing tag. The caffeine is also said to decrease the appearance of veins and help eczema, among other things, so yay. I'm pretty sure it smells javalicious, too! I think the word I heard used was "heavenly." I'm anxiously waiting to test it.

There are tons more prettying products, but the point is that all sorts of things, from under eye cream to root lifter, can have a caffeine fix — and it's probably better for you than that sixth latte.