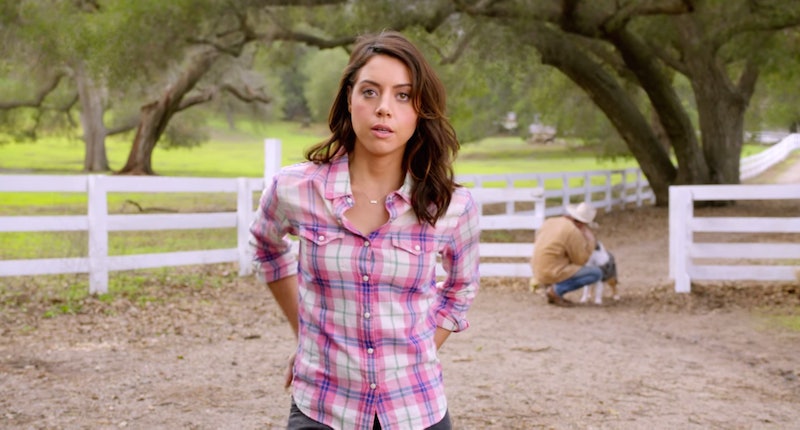 I'm normally not one to promote or even talk about the brilliance of commercials, but Newcastle Brown Ale's newest non-commercial with Aubrey Plaza gets a pass for quite a lot of reasons — so I'm just going to start with the most glaringly evident one first: AUBREY. PLAZA. Seriously, is there really any way a brand can go wrong with a commercial if they've hired Aubrey Plaza to star in it?

(The answer is no, no they cannot — this is a statement of fact, not opinion. She could appear in a commercial for anything, and whatever she's promoting would be an instant success, because she is Aubrey Plaza.)

Now that we've gotten that out of the way, we can move on to reason number two: This Newcastle Brown Ale ad is not really an ad, as much as it is an ad disguised as a viral call to action for other similarly small brands to band together with them in an effort to create one big expensive commercial that will air during the Super Bowl — in fact, the product itself is hardly mentioned, but you leave this promo instantly feeling as if the Newcastle Brown Ale brand is cooler than, say, Miller Lite or Coors. See, in a time when irony in advertising manages to trump any methods you see Don Draper trying to employ in Mad Men , there's really no better way to sell a product in 2015 than to, well...make it seem like you're not actually selling a product, especially during a highly commercialized event like the Super Bowl is.

Just take a look at the ad for yourself:

As the ad focuses on Plaza explaining the concept of Newcastle Brown Ale's campaign to enlist small business to partner with them to combine advertising budgets, and thus create an expensive Super Bowl commercial that promotes them all, the beer isn't mentioned that many times. It's just mentioned enough — along with a ton of deadpan jokes about advertising tropes like cute dogs and hot cowboys — to drive home the fact that Newcastle Brown Ale is a "cool" brand that probably employs people who use Air BnB and understand what the term "on fleek" means: all important stuff for today's younger consumers. Though Newcastle reportedly won't be airing a national ad during the Super Bowl (instead, they're buying ad space on local networks to air during the game), this is still a win.

This isn't the first time Newcastle has gotten it right with advertising, either: This ad once again proves that Newcastle Brown Ale hires the best celebrity spokespeople of all brands (yes, I'm including John Corbett for Applebee's). While this year the company enlisted Plaza for their campaign, it was equally awkward/loved by the Internet celeb Anna Kendrick who appeared in a "non-commercial" for the company last year around this time.

Instead of airing on television, the promo was posted online like Plaza's, and was based on the joke that Kendrick was supposed to star in an expensive Super Bowl commercial for the company, but then they ran out of money. It was a viral hit, of course, because Anna Kendrick herself is a human meme:

Anna Kendrick and Aubrey Plaza for the same brand, only a year apart, plus no blatant advertising? Take note, guys: This is how viral advertising is done right in the Internet age. (Also, is it too early to nominate Emma Stone for next year?)