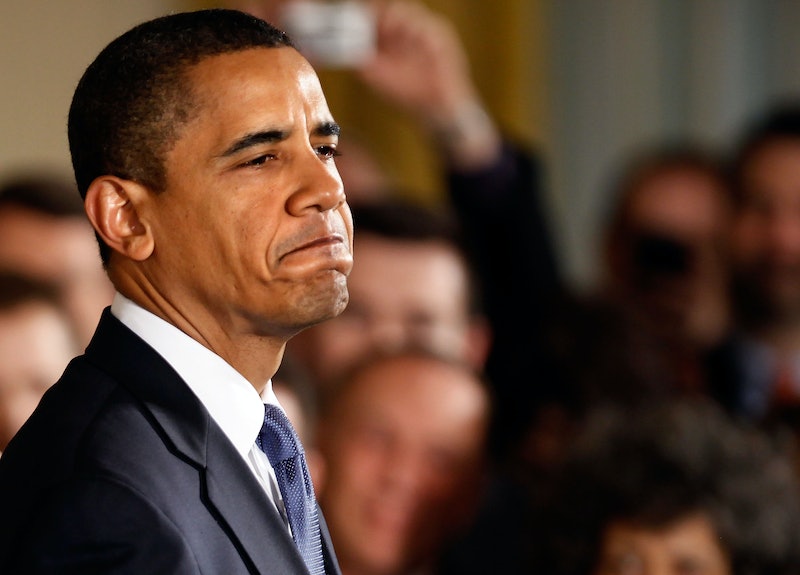 President Obama has his share of critics at home, many of whom belong to the GOP. Sometimes the criticism is sincere and valid, serving as an important progression in the debate surrounding whatever the issue at hand, but many a time it is frivolous, eye-rollingly asinine comments made by questionable lawmakers who somehow manage to bypass their bevy of PR people to say things that they later scramble to take back. Case in point: Texas Rep. Randy Weber compared Obama to Hitler on Twitter in an expression of disapproval at the President's no-show at the Paris Unity Rally.

Even Adolph [sic] Hitler thought it more important than Obama to get to Paris. (For all the wrong reasons.) Obama couldn’t do it for right reasons.

The tweet came after the White House apologized for not sending a higher-ranked official to the Jan. 11 unity rally that saw world leaders march arm-in-arm alongside a massive crowd, in solidarity with victims of France's terror attack and in support of freedom of speech. After being soundly criticized by the American media for the absence of a more senior official — the U.S. ambassador to France, Jane Hartley, was its representative — White House press secretary Josh Earnest said on Monday:

I think it’s fair to say that we should have sent someone with a higher profile.

Evidently, Weber decided that the absence of Obama himself was tantamount to a grave indiscretion, because well, I guess even Hitler visited Paris in 1940 after Nazi soldiers invaded and occupied France, so why couldn't Obama?

It's not the first time Weber has expressed a radical opinion about the President. The Congressman of Texas' 14th district tweeted last year from the House floor that he was awaiting the "Kommandant-In-Chef," and in the same sentence called Obama a "Socialistic dictator."

Randy is somewhat known for having claimed that no one in the Republican party could "out-conservative" him. His rise to Congressman came after he won a nine-way primary to succeeded the libertarian figure, Ron Paul. Randy told National Journal in a July 2013 interview:

I don't just say I'm conservative. I have boot leather to my gospel...

I'm so Republican, my first name starts with "R." I'm so right-wing—well, Randy Weber. You do the math.

I don't know what kind of logic that is, but I suppose it shouldn't be particularly surprising that someone who prides himself in being the most right-wing politician made a comparison so bafflingly idiotic.