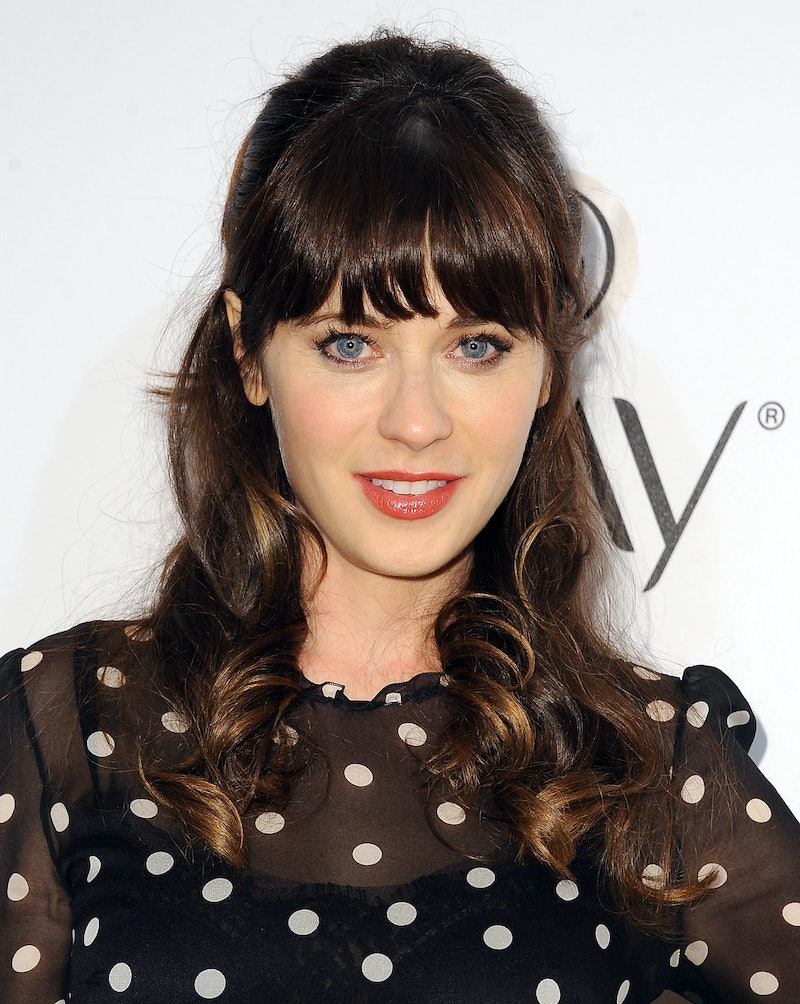 EEEE! Excuse me while I squeal with glee because I just read that Zooey Deschanel is pregnant with her first child! The thought of one of the most adorable celebrities on the planet having her own teeny, tiny clone is just too cute to handle. Deschanel exclusively told People about the special news, saying that she and her boyfriend, Jacob Pechenik were "over the moon" and super excited to meet their little one. Aww. So naturally, because I am very impatient, and needed to find out when Zooey Deschanel is due to prepare myself.

This news seems to come a bit early for the couple, who have only been together since about mid-2014 after meeting on the set of their upcoming film Rock the Kasbah, but who am I to judge? No matter what, it sounds like Deschanel is excited about the news and it must be loeve because I remember in the past, she hasn't always been so enthusiastic about the idea of having kids or being asked about the notion. In an interview with InStyle this past July, (which I assume was around the time she met Pechenik) she said questions about kids and marriage bring out the "fiery feminist" in her. She explained,

Like every woman is dying to give birth! I don’t think so. Nobody asks guys that... And you go into a supermarket and every tabloid is like, "Pregnant and Alone!" Stuck in the 1950s ideal of how a woman should live her life. This brings out the fiery feminist in me.

What I love is that by announcing her own pregnancy to the press, Deschanel can still hold true to her ideals and takes the power away from the tabloids and into her own hands. Get it, Zooey.

As for any hints that Deschanel and Pechenik were expecting a child before their announcement, you'll have a hard time finding anything. The last news I remember hearing about Deschanel was when she was being sued for hurting a horse she rented and returned it as "a shell of its former self." How's that for a (hopefully very untrue) story?

I lurked around some and saw some photos of Pechenik and Deschanel walking together in Los Angeles in early December, and she does not look like she was outwardly showing at all, only wearing a slightly baggy cardigan, so based on her baby announcement coming in January, I'm going to guess that she was just in the end of first month and beginning her second, which would lead me to believe she is announcing her pregnancy at the usual "safe mark" of three months.

Looks like the happy couple can be expected to have a summer baby, around June or July, and probably only one month or so after her sister, Emily Deschanel, gives birth! So many adorable Deschanel family playdates ahead. There's no word yet on New Girl being renewed for a fifth season, but I'll be optimistic and say that it will and new momma Deschanel is going to have a lot of new things on her plate. I have no doubt she can do it all, though. Congrats again to the happy couple!