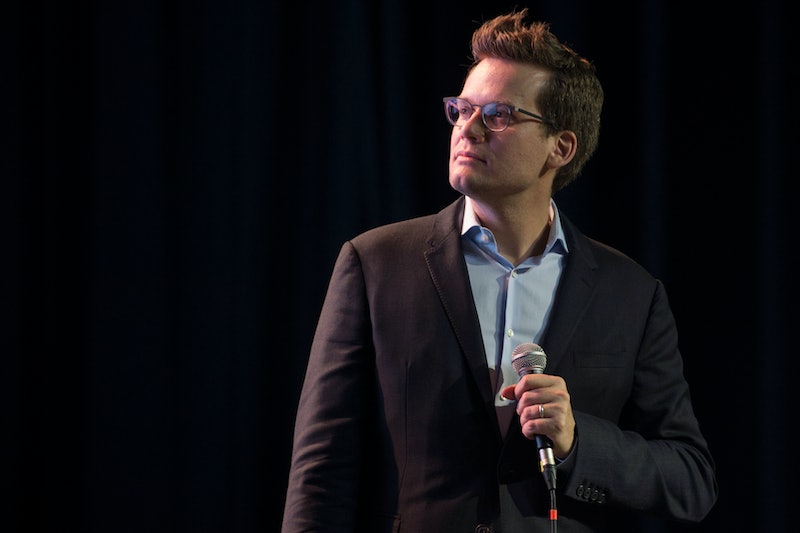 John Green's debut young adult novel Looking for Alaska hit our bookshelves 10 years ago Tuesday, but it still feels like it could have been published yesterday. Before there was all the hubbub around The Fault in Our Stars (which is deserved), both the book and the movie adaptation, and before there was Paper Towns , which will also be a movie, or An Abundance of Katherines , there was a story about a last-words obsessed teenage boy named Miles Halter who heads to a boarding school to seek a "Great Perhaps" and the mysterious girl he meets there. That girl is the titular Alaska Young.

Publisher Dutton released a special 10th anniversary edition of Looking for Alaska to commemorate the milestone, and it includes a Q&A and introduction by Green himself, as well as drafts of the original manuscript. He describes his purpose writing the novel in the introduction:

The story I wanted to tell… was about young people whose lives are so transformed by an experience that they can only respond by reimagining time itself.

The story is structured around a sort of "before" and "after" format, though readers aren't sure what that defining moment in time is. (And no, you won't learn it here!) As Green says on his webpage, he was inspired to structure the book this way after seeing how humanity as a whole depicted the 9/11 attacks as a moment that had a "life before" and "life after," and this type of framework stuck with him.

After some setbacks, the Looking for Alaska movie version is moving forward with Sarah Polley as the screenwriter. (Personally, I think this is Green's least adaptable novel, but hey, someone did Cloud Atlas so they can do anything.)

And though it's been an entire decade, Looking for Alaska still resonates today for eight particular reasons — and they showcase just why we need more books like this powerful one.

1. Its Depiction of Mental Health

And then something invisible snapped insider her, and that which had come together commenced to fall apart.

Readers can tell that there's something going on inside Alaska's brain, and so can the characters around her. But none of us, we readers included, can ever quite grasp what she's thinking, feeling, or experiencing. Green never puts us inside Alaska's head to say, "oh hey, I get it." And that, I like to think, is completely on purpose.

In real life, we can never quite understand what someone with a mental illness is feeling on the inside. It's an invisible disease, and unless whomever is suffering is willing to open up and talk about it (which is a feat in itself), we can't ever know. And Green depicts this with so much compassion and understanding of this tragic truth.

2. Its Focus On Living In The Present

Imagining the future is a kind of nostalgia. ... You spend your whole life stuck in the labyrinth, thinking about how you'll escape it one day, and how awesome it will be, and imagining that future keeps you going, but you never do it. You just use the future to escape the present.

Because of his own pain and experiences, Miles has something truly honest and relevatory to say, though it may not seem that out of the ordinary: Constantly only envisioning your future deprives you of your present. This is an issue for teenagers and most adults too, definitely still today. And probably until the end of time.

3. Because of This, the Message to Seize the Day

Francois Rabelais. He was a poet. And his last words were "I go to seek a Great Perhaps." That's why I'm going. So I don't have to wait until I die to start seeking a Great Perhaps.

Reading Looking for Alaska felt like a thousand pep talks being injected into my brain at once — minus all the mumbo jumbo and marketing speak. Miles embarks on an adventure to his new school and experiences pain, heartbreak, and suffering, but also pure joy, true friendship, and a new sense of the world he would have missed staying in his own little corner of life. It's an idea we constantly need to hear, because it becomes so easy to do just that.

4. The Power of An Awesome, Well-Rounded Female Character

Alaska decided to go help Dolores with dinner. She said that it was sexist to leave the cooking to the women, but better to have good sexist food than crappy boy-prepared food.

She may not know magical spells or be a crack shot at the bow and arrow, but Alaska Young is a force. She gets a bit of a bad rep as a manic pixie dream girl, but I think she rises above. She's a self-described feminist, she loves to read, and she's always down for an adventure. But she has difficulties, too, and she's trudged her way though some tragedies. Basically, she's pretty awesome as a character.

5. How Friends Can Make Life-Changing Relationships

It always shocked me when I realized that I wasn’t the only person in the world who thought and felt such strange and awful things.

Finding true friends, as Miles does with the Colonel, Alaska, and the others, is, was, and always will be one of the most important marks of life. And we're always, always going to need books that celebrate these positive, platonic relationships over (or even on the same level as) romantic ones.

I wanted to be one of those people who have streaks to maintain, who scorch the ground with their intensity. But for now, at least I knew such people, and they needed me, just like comets need tails.

I wanted so badly to lie down next to her on the couch, to wrap my arms around her and sleep. Not fuck, like in those movies. Not even have sex. Just sleep together in the most innocent sense of the phrase. But I lacked the courage and she had a boyfriend and I was gawky and she was gorgeous and I was hopelessly boring and she was endlessly fascinating. So I walked back to my room and collapsed on the bottom bunk, thinking that if people were rain, I was drizzle and she was hurricane.

With all of the insta-love and true-love-but-really-not teenage love stories, we're always going to need the ones that show what a crushing feeling that first big "love" is. I mean, that's why it's called a crush. It doesn't work, you're probably not actually right together, you feel like you could never be enough, but my good gosh do you have this powerful pull toward someone and it seems like just possibly they could be everything.

7. The Glory of Reading

“Have you really read all those books in your room?” “Oh God no. I’ve maybe read a third of ‘em. But I’m going to read them all. I call it my Life’s Library. Every summer since I was little, I’ve gone to garage sales and bought all the books that looked interesting. So I always have something to read.”

Ugh, if it's kind of self-serving for an author to write about how reading can build a person in a book that they wrote and someone is reading, then I'm 100 percent cool with authors being self-serving. Alaska surrounds herself with books and it's crucial part of what makes her who she is. Same goes for Miles who is constantly seeking the next nonfiction story with those great last words.

I found myself thinking about President William McKinley, the third American president to be assassinated. He lived for several days after he was shot, and towards the end, his wife started crying and screaming, "I want to go too! I want to go too!" And with his last measure of strength, McKinley turned to her and spoke his last words: "We are all going.”

Some novels — and mind you, I'm talking both YA and adult fiction — turn death into this epic, romantic thing. Or else, it's just something to keep the plot moving for the main character. Looking for Alaska meets death with questions, just like we humans do. It's confusing and awful and blurry and painful, and mostly it leaves us with more to ask than anything to answer.