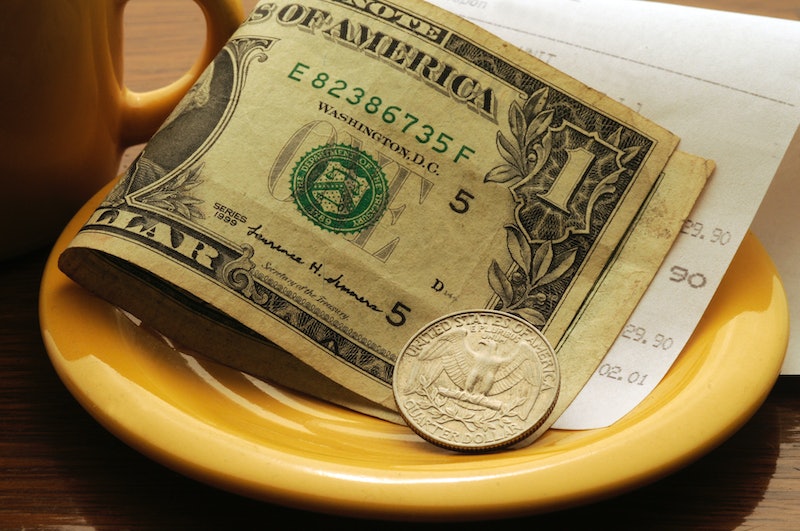 I know, I know—the idea of getting rid of tipping in restaurants altogether sounds insane without further explanation. (This is the same reason I hated Reservoir Dogs for so long—Buscemi had a weak argument.) I judge the hell out of people on dates and friends depending on how they tip. But it turns out, given a little evidence and some background history regarding the tradition of tipping in American culture, you'll likely agree that the practice should be outlawed.

Tipping started during Prohibition, when overall restaurant profits suffered tremendously from the lack of alcohol sales. Essentially, restaurant owners noticed their emptying pockets and decided to push tipping as a norm. That way, they could pay their employees less, thus bulking up their own bottom lines with the dwindling revenue generated from non-booze sales.

As a cruel joke, the antiquated standard continues to exist long after hooch started flowing legally again. Most servers and bartenders receive hourly rates that fall way below minimum wage, making their entire livelihood dependent on tips. And as a general rule, people tip fairly randomly. Meaning, it doesn't matter whether or not servers hustle hard to provide extra diligent service—how people tip will still largely be random. What really needs to change here are bar and restaurant compensation practices. The standard for paying restaurant workers needs to be raised to accommodate—oh, I don't know—the actual cost of living. Unfortunately, though, we appear to just not be there yet as a society. In the meantime, check out this convincing argument against tipping: