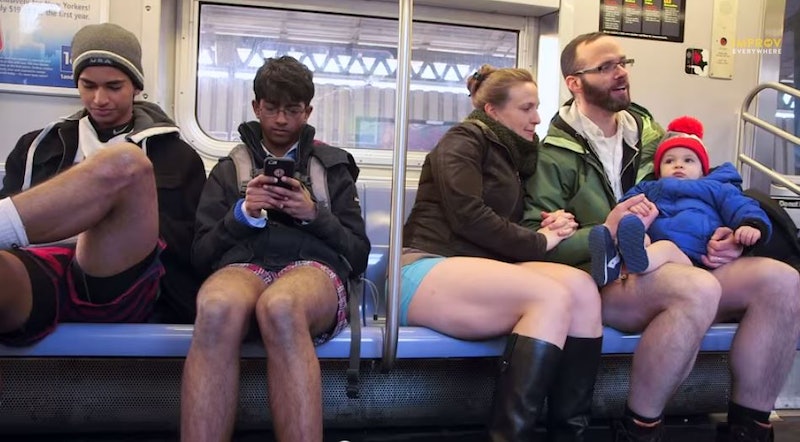 This past Sunday while I was busy doing my grocery shopping, thousands and thousands of people in New York City and all over the world were shedding their trousers and taking part in Improv Everywhere’s 14th Annual No Pants Subway Ride. Am I sad I wasn’t there for it? Kind of; strange and wonderful happenings like this is one of the things I still find myself missing the most a year and a half after I moved to the ‘burbs. But at least the event is heavily documented these days, so I can always live vicariously through the videos and photographs, right?

It’s kind of nuts to think that a small happening staged with just seven participants in one city back in 2002 has grown into a worldwide event undertaken by thousands of people every year. It hasn’t been smooth sailing the whole time; in 2006, for example, the fifth No Pants ride came to an abrupt end when the train was halted and eight participants were arrested. A month later, the charges were dismissed; it’s not illegal to wear your underwear in public in New York City. Heck, it’s not even illegal for women to walk around topless in New York City, so maybe we should all take a moment to familiarize ourselves with the laws governing clothing and attire before leaping to conclusions.

In any event, it’s become clear over time that the No Pants Subway Ride cannot be stopped; by 2008, the number of New York riders was up to 900, and the number of cities participating had jumped to nine (including the first international locations). It has continued to expand each year, with the figures for 2015 looking like this:

Not too shabby, right? Check out the official video here:

Although it’s easy to look at the No Pants Subway Ride and think, “But… what’s the point?”, I think that, like all comedy, it gets to the root of what makes us human. How we cope with uncomfortable yet ultimately harmless situations says a lot about who we are — and sometimes, we need to remind ourselves that there’s humor to be found even in the weirdest things. If you find yourself starting to get all worked up about something, try laughing instead of blowing your top. It might just make you feel better.

For the curious, here’s how the event went down in a few of the other cities, too:

The Boston Society of Shenanigans created an online tutorial this year to help prepare riders in advance; the sage advice featured in it included outfit ideas (winter coat, gloves, scarf, hat, boots, ear muffs, and so on — pretty much everything you’d normally wear to brave a Boston winter except pants), suggestions for what to bring to carry your pants in once you shed them, and clarification that the whole thing is, in fact, legal. The main point? The No Pants ride isn’t meant to offend; it’s meant to make people laugh. Conduct yourself accordingly, even if that means wearing three pairs of underwear to ensure nothing… erm… escapes.

There’s nothing quite like the sight of several thousand Chicagoans doing the Hokey Pokey in the dead of winter wearing everything but their pants. Am I right, or am I right?

Let’s give Bucharest a hand for participating in its first-ever No Pants Subway Ride!

Is anyone else kind of tickled by the idea of the fashion capitol of the world ditching their incredibly well-tailored trousers for the event? There’s something sort of “The Emperor’s New Clothes” about the whole thing, no?

Check out the full history of the No Pants Subway Ride over at Improv Everywhere's website.