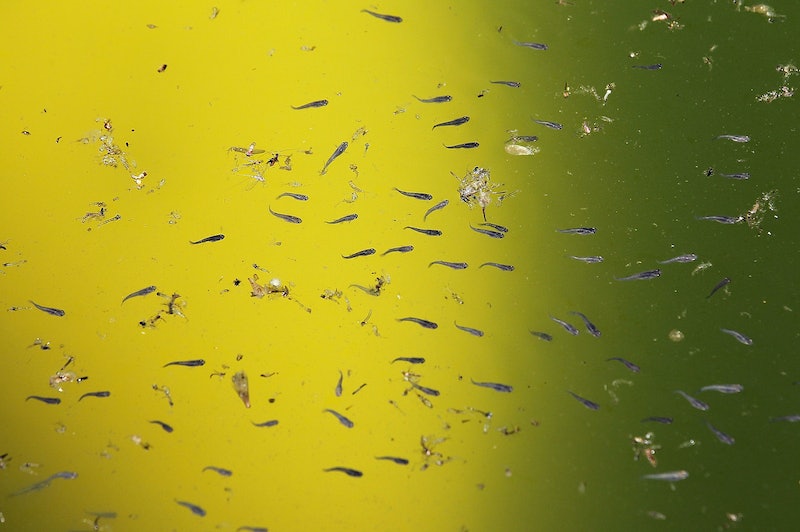 Welp, we might as well start building apocalypse bunkers now, because the "super mosquito" has emerged. Why such a terrifying, mighty-sounding moniker? The new super mosquito is resistant to malaria insecticide, which means that the life-saving insecticide-coated bed nets that reduce malaria transmission by 90 percent are now rendered useless. The ironic part? Humans essentially created these super mosquitoes by introducing insecticide into their environment and forcing them to build resistance. Resistant or not, I'm still going to start buying Off! in bulk.

In the West African country of Mali, the interbreeding of two different malaria-carrying species of mosquitoes has created a hybrid species that's resistant to the insecticide used on bed nets. That was a spine-chilling sentence right there. But even scarier? We did this to ourselves. In the study, which was published January 6 in the Proceedings of the National Academy of Sciences, lead researcher Gregory Lanzaro of UC Davis said:

[The study] provides convincing evidence indicating that a man-made change in the environment — the introduction of insecticides — has altered the evolutionary relationship between two species, in this case a breakdown in the reproductive isolation that separates them.

In other words, it's all our fault that there is now some monster mosquito that can probably eat through steel. According to the study, the new hybrid species likely emerged as "adaptive introgression," which is the movement of a gene from one species into the gene pool of another, around the same time that the number of insecticide-coated bed nets started to increase in Mali. The increased presence of insecticide then forced the mosquitoes to adapt, and thus altered their evolutionary path.

Insecticide-treated mosquito nets have been credited for saving tens of thousands of lives in Mali alone, and the World Health Organization's World Malaria Report reveals that they've helped decrease the number of deaths worldwide by malaria by 47 percent since 2007. However, Lanzaro is not surprised that these life-saving objects have also created an insecticide resistance. He wrote in the study:

Growing resistance has been observed for some time. Recently it has reached a level at some localities in Africa where it is resulting in the failure of the nets to provide meaningful control, and it is my opinion that this will increase.

So what does that mean? Are we doomed? To give you some sense of how devastating malaria is, the disease killed an estimated 584,000 people in 2013. That's about 70 times more than the number of people who died from Ebola in the same year. And an estimated 3.2 billion people — nearly half the world's population — are at risk of malaria.

Luckily, the super mosquito does not necessarily spell the end of the world. According to the study, several new malaria-fighting methods are in the works, including new and improved insecticides, biological agents like mosquito-killing bacteria and fungi, and genetic manipulation strategies that would either kill mosquitoes or disable them from transmitting the malaria parasite. Until they're available, I'll be in my bunker.