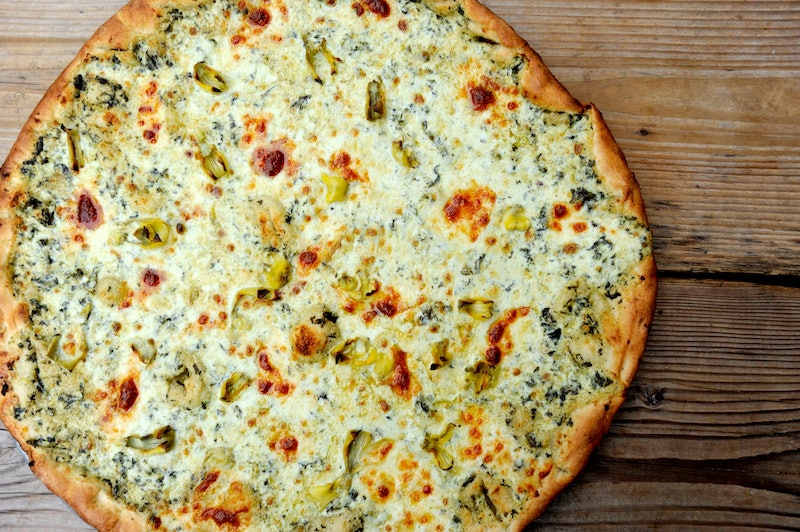 Pizza has always been amazing but for some reason I feel like it’s almost a fad now — every time I check my Instagram there’s a new post about pizza being better than a boyfriend, or how pizza should run for President in 2016, or about pizza replacing your actual blood. It seems as though this pizza obsession is not exclusive to just Instagram, though, since a national survey found Americans eat 6,000 slices of pizza in their lifetime. That seems like a lot. Now I can’t help but wonder if I’m above average in terms of my pizza consumption. I mean I did have pizza two times last week but I usually only eat one slice, does it balance out? How can I find out?!

OK, that’s enough of my pizza existential crisis for now. The aforementioned survey was conducted by Texas-based pizza chain CiCi’s Pizza, who asked one thousand Americans how much pizza they consume per month and how long they’ve been eating it. Most of them ate pizza starting when they were eight years old, and have on average eight slices a month (so I guess I’m not above average, I’m not sure if I should be happy or sad about that). Multiply that by the average life expectancy, and voilà! You have your 6,000 lifetime slices of pizza.

If you know you eat way more than a measly eight slices of pizza per month, you may be among the 10 percent of Americans who have what must be a pizza addiction. Those people ate 36 slices of pizza each month, which calculates to having pizza three times per week, three slices per sitting. Those people can only be described as true American heroes, single-handedly keeping their local pizza parlors in business. We salute you.

But this survey didn’t stop at mere pizza consumption — oh no, it also covered the most beloved pizza toppings. Unsurprisingly, pepperoni was the most popular, being named by one-third of participants as their favorite. Other favorites included sausage, black olives, chicken, and of course, extra cheese.

While that might not surprise you, here’s what might: CiCi’s also asked participants what toppings they’d most like to see on their pizza. The top 10 dream pizza toppings went as follows:

For the fancy pizza enthusiast in you.

I could maybe get behind this.

This just makes me think of that time the Krusty Krab tried to expand into pizza.

Do these people not know that you can already get chicken, pineapple and ham on a pizza? Have they been leading a deprived existence this entire time??

I don't really know what this is but not going to lie, I would try this. Only God can judge me!

I'm sorry, what kind of monster would put kale on pizza? It's not supposed to be healthy, people!

For when you want your slice of pizza to cost more than your month's rent.

So there you have it. If this doesn't have you running to the pizza place nearest you, I don't know what will. Oh, and as for why Americans eat so much pizza? The same reason you love it: it’s convenient and cheap. I don't know about the rest of you, but I know what I'm getting for lunch today.

And because pizza isn't perfect enough already, here's a gif of Ryan Gosling eating it.

Is it possible to be starving and swooning at the same time? Because I'm currently doing it.