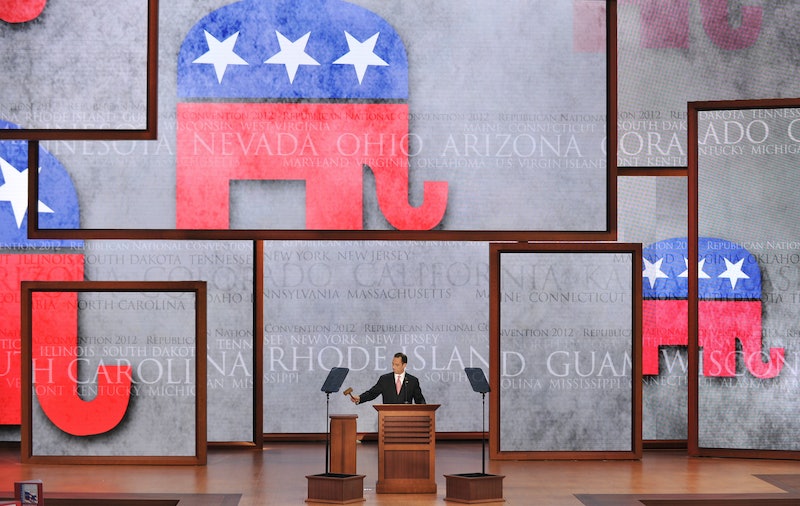 Republicans didn't rely on social issues for their November congressional sweep. It isn't exactly the party's strong suit, particularly as the country becomes increasingly lax on issues that were once taboo (read: marriage equality). So does that mean that in 2015 we can expect our leaders to back off of social stuff and focus ongood ol' fashioned fiscal reform? Don't bet on it. The GOP, who for months seemed to squawk "job creation" like a demented parrot, chose an issue close to every die-hard Republican's heart to debut the 114th session. That's right, Republican politicians are already fighting abortion in 2015.

In its first three days, Congress introduced five anti-abortion measures. Five. It seems that limiting women's access to safe abortion is on par with the Keystone XL pipeline, another harmful Republican favorite. The House re-introduced a bill that would restrict abortion limits to 20 weeks, which already passed the Republican-led chamber in 2013. Representatives will vote on the bill on Jan. 22, the anniversary of Roe v. Wade , to commemorate their embarrassing backpedaling on human rights. Meanwhile, the Senate took aim at Planned Parenthood funding and created a legislative obstacle course for abortion providers, particularly outside of urban areas. Ah, what a start!

No, they aren't all abortion-obsessed nut jobs — but a lot of them are. Here are a few of the most dangerous anti-abortion politicians to watch for in 2015.

Remember those five abortion bills that have been introduced? This Louisiana gentleman is responsible for four of them. He's a real gem. Aside from trying to bar Planned Parenthood from receiving federal funds for family planning services, Vitter has brought the hospital-admitting-privilege song and dance to the federal level, proposed a ban on gender-biased abortions (because that's a thing?), and introduced a bill that would allow doctors and nurses to refuse to provide abortion care.

Priorities, am I right? By the way, on his U.S. Senate site, Vitter tucks his clearly avid agenda into the fold. The "Life & Values" section of his issues details his already apparent thoughts on abortion. Another issue important to Vitters? "Seafood," which sits just two slots below.

These guys are the heads of the Senate and the House. They decide when (and if) bills see the light of day. These guys have also pledged unwavering support for restricting abortion access. You can see why this would be a problem.

In 2013, Boehner recorded a special message for the Right to Life March, which occurs every year on Jan. 22, the day Roe v. Wade was passed (and yes, the very day the House will vote on the 20-week ban).

With all that’s at stake, it is becoming more and more important for us to share this truth with our young people, to encourage them to lock arms, speak out for life, and help make abortion a relic of the past. Let that be one of our most fundamental goals this year.

I very much doubt that Boehner has had some grand enlightenment on abortion in the past year. His Senate counterpart, however, leaves absolutely no doubt in his intentions. At the National Right to Life conference this June, McConnell vowed that he would bring the issue to the floor if he gained Senate leadership.

This junior Senator from Iowa is the prime example of burying the lede. During her time in the Iowa Senate, Ernst was a staunch opponent of abortion bills and a leader in the astonishing "personhood" movement. But was that a key part of her campaign for U.S. Congress? Nope. In fact, she backed away from it as much as possible without pissing off her abortion-crazed constituents. During the final weeks of the midterm elections, Ernst dropped her personhood megaphone for a quieter, less controversial approach. In a debate with opponent Bill Braley, she equated her fervent abortion defenses to being harmlessly pro-life.

There would be certain exceptions but again it’s something that has to be discussed. I support life. Those things come together when there is consensus upon what is put into legislation. Right now there is not consensus but I do believe in supporting life.

But money talks. From 2013 to 2014, Ernst was the top recipient of anti-abortion candidate funding. These groups know that her radical past makes her an important legislator to have in their pockets, and her sneaky election tactics make her an all-the-more disconcerting newbie.

Oh, and more good news — she'll be delivering the Republican rebuttal to State of the Union. Can't wait!

Paul's 2016 dreams aren't exactly secret. And unfortunately for us, the U.S. Senator from Kentucky wouldn't be a total joke of a candidate. Paul, like his father and perennial presidential hopeful Ron, rides the line between conservative and libertarian. For a populous that is increasingly divorced from parties, that kind of candidate seems attractive. But unlike his father, Paul's rising star in the Republican party could also garner votes from the GOP.

A Republican that doesn't necessarily ride the party line sounds great, but Paul is more extreme than he lets on. Although he managed to anger conservatives with a "nonchalant" attitude toward his role in ending abortion evils last year, he has some pretty clear-cut ideas on the topic. His website states:

I am 100% pro-life. I believe life begins at conception and that abortion takes the life of an innocent human being. It is the duty of our government to protect this life as a right guaranteed under the Constitution. For this reason, I introduced S. 583, the Life at Conception Act on March 14, 2013. This bill would extend the Constitutional protection of life to the unborn from the time of conception.

In raising money for anti-abortion groups and pushing for the Life at Conception Act, Paul is trying to end abortion by establishing at a federal level that the procedure is murder. His appeals to "freedom-loving, liberty-loving, leave-me-the-hell-alone voters" might make him attractive to independents. But a good showing of anti-abortion stability this session would seal the deal for many GOPers in 2016. His actions and votes on the issue will be scrutinized, and I doubt he will disappoint.

Blackburn could be the answer to Republican's prayers for this first wave of anti-abortion legislation. The representative from Tennessee is co-sponsoring the 20-week abortion ban with Arizona Rep. Trent Franks, who pulled a Todd Akin when he said that the instances of pregnancy resulting from rape were "very low." That was the last time he defended his 20-week bill, and this time he won't make the same mistake. Mostly, because he won't be the one in the spotlight. Republicans are going to benefit from sending women to debate the legislation, women like Blackburn. When it has a lady sponsor, they can play the best-for-women card at least a little more convincingly. Although I've still got my doubts. Major ones, in fact.

Blackburn has a history of introducing anti-abortion legislation, including bills aimed at defunding Planned Parenthood.