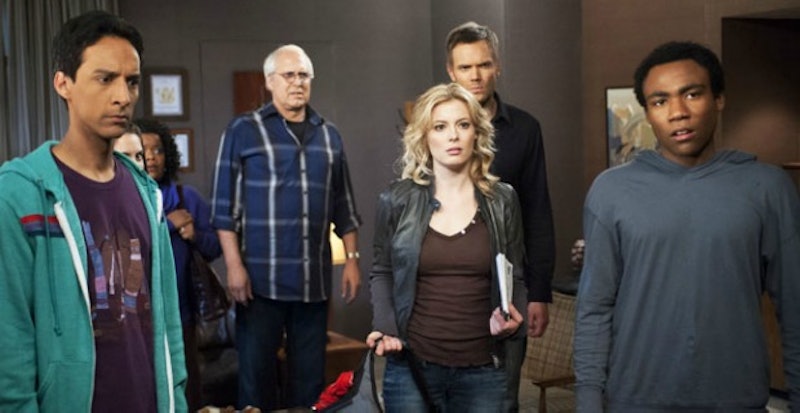 "Six seasons and a movie" has been a mantra for Community since Danny Pudi's Abed jumped around the Greendale Community College cafeteria in a cape defending the soon-to-be-cancelled The Cape. Now, one NBC Community cancellation and Yahoo-pick-up later — not to mention one firing and re-hiring of Community overlord Dan Harmon later — it actually seems like a palpable future for the beloved cult show. In fact, fans only have a couple months left to wait until Community 's Season 6 hits Yahoo. So, when exactly will that be?

The announcement comes via Yahoo's presentation at the Television Critics Association's annual winter press tour. A video poking fun at the show's previous lack of network support announced that you can expect Community to arrive on Yahoo come March 17, 2015.

Here's what else we learned about Community Season 6:

It's unlikely, considering Glover's been nominated for a Grammy for his music work as Childish Gambino and has his own show in the works at FX, but the former Troy Barnes will always have a home at Greendale if he wants it.

Brown made sure to note at Monday's presentation for The Odd Couple that she did not jump ship from Community for the CBS show: She had to care for her sick father and Community's hours were too long to accommodate that. She expressed interest in returning to guest star, and Harmon confirmed Tuesday that of course she's always welcome back at Greendale, as well.

Dan Harmon's Not Writing This As If It's the Last Season

Harmon's not planning for an ending, apparently; this unkillable phoenix of a show will apparently go as long as its fans want it to.

The question then becomes: How long do fans want it to go?

As For What the Show Will Feel Like on Yahoo...