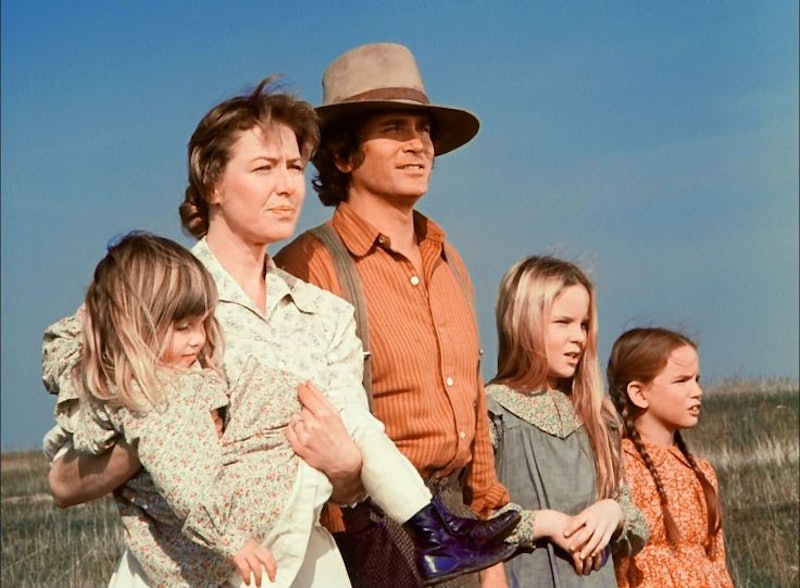 OK, so Laura Ingalls Wilder's real life story may not match up exactly with her beloved Little House on the Prairie books. (Did you know that the events of Little House in the Big Woods actually took place before those in Little House on the Prairie? Even a dedicated autobiographer like Wilder took a few liberties with her work.) But her series is an enduring look at growing up in America during the hardscrabble 19th century, a period marked by hardship and constant movement around the mostly unsettled land of a new country.

It's also a pretty incredible look at one of America's greatest heroines, the kind of role model that every young lady should aspire to be like. Do I still prickle at my memories of being forced to play-act as Laura's older sister Mary when I was kid, simply because I had blond hair like her, while my brunette best friend always got to be Laura? Yes, yes I do. Even if our lives look a whole lot different from Wilder's own homesteading and farming experiences. Wilder penned eight Little House books, and although the author's life might feel hard to fathom to modern audiences, the heart and spirit of the series remains both very moving and ultimately relatable.

If you love Little House on the Prairie (and, honestly, how could you not?), these are probably some of the bits that stuck with you the most:

1. Few things are as delicious as ribbon candy and maple syrup

Sweet treats were hard to come by during Ingalls' childhood, but she always remembered the pure pleasure of grabbing a piece of ribbon candy from the general store or making her own maple syrup by hand. Ingalls described such delicious confectionary in vivid terms, so tasty that you could almost imagine chowing down on them yourself.

The Ingalls family would quite literally "hit the hay" when it was bedtime, thanks to straw tick mattresses that were essentially hay-stuffed sacks. At the end of a long and busy day, Laura was always happy to rest up, but damn if her mattress of choice made me feel prickly just reading about it. (Later, of course, Laura slept on a wide variety of other beds, from sofas to flowers, but those straw ticks stuck with me.)

The flighty Laura might have been very different than her serious older sister Mary or her sweet younger siblings Grace and Carrie, but the girls always stuck by each other and often had the very best time doing it. When young Mary lost her sight after a battle with a meningitis-like virus (although it was long believed that scarlet fever took her vision), Laura faithfully helped her sister adjust to her new lifestyle. Their bond is one of the best and most important elements of Ingalls' books.

The Ingalls clan moved a lot when Laura was young, but her mother Caroline always made sure to pack some of their family heirlooms. Later, when a fire destroyed Laura and her husband Almanzo's homestead, she managed to save a large bread plate that was one of the Wilders' first shared belongings.

5. Sledding is a romantic, if dangerous activity

Almanzo and Laura's courtship was a long one, punctuated by a lot of driving around in his various vehicles — especially his sleek "cutter" sleigh, which Laura delighted in. As dangerous as sledding around in a teensy sleigh pulled by two frisky horses in the snow sounds, the duo adored it, and it was one of the most romantic activities they dabbled in. Who wouldn't want to set out in a snowy sled built for two?

6. Post-graduation life can be really strange

Almanzo really kicked his attempts for Laura's affection into high gear when she took a teaching job far out of town right after she graduated from her own studies. Laura was miserable during that time, isolated from her family and forced to sleep on an uncomfortable sofa in an unhappy household, but her depression was lifted every week, when Almanzo appeared to drive her home for the weekend. It was no small feat, and it made a pretty terrible time in young Laura's life much better. See? Post-grad life is hard for everyone.

Between the milking, the farming, the cooking, the cleaning, and the special stuff (like making headcheese!), Laura did her fair share around the homestead. Grateful for running water and electricity? You should be.

8. Be grateful you never have to travel in a covered wagon

It's a lesson that Oregon Trail drove home, too: traveling in a covered wagon is painful and boring and hard. The Ingalls family zigged and zagged around the country, and most of the time, those moves involved packing up all their belonging into a teensy covered wagon. Not ideal.

Laura may have been spunky and bright, but that didn't save her from encountering meanies on occasion. The most well-known? Nellie Oleson, who taunts Laura from Minnesota all the way to South Dakota (can you even imagine your childhood bully moving to your new hometown entire years after they made you miserable? what are the odds of that even happening?). Although it's believed that the Nellie from Ingalls' book is an amalgamation of at least three different young ladies, Laura's dislike of her is still keen and biting. And she's still mean!

Although the Ingalls family moved around throughout Laura's childhood, they eventually settled into life in tiny De Smet, South Dakota. Although life in De Smet was hard — remember The Long Winter? — Laura and her family made plenty of friends, good neighbors, and enjoyed the pleasures of living amongst other people after so many years of homesteading. Hot food, a general store with ribbon candy, and winter sledding — what could be better?

11. It can take a while to find your truth path in life

Young Laura's attempts at teaching were mostly short-lived, and she spent a large portion of her adulthood serving as a farm wife, a homesteader, and a mother. Ingalls didn't become a writer until she was 44 and she got a column of her very own in a local paper. Her first Little House book wasn't published until more than two decades later.

Laura relished a stiff breeze, a good book, and a hot meal — stuff that may have been harder to come by during her lifetime, but an solid lesson nonetheless. Now, where's that ribbon candy?

13. Never underestimate the power of a good group of girlfriends

The Ingalls girls may have been super-tight, but as Laura grew into a sassy De Smet teen, she assembled a solid group of gal pals, including Mary Power and Ida Brown, who provided her with all sorts of fun and social activities to dabble in.

14. Animals are members of the family, too

As farmers, the Ingalls family was often at the mercy of their literal steads, but that didn't stop them from feeling passionately about their various animals, from Jack the bulldog to Sam and David the drafthorses. Laura cried when they passed away, and I did, too.