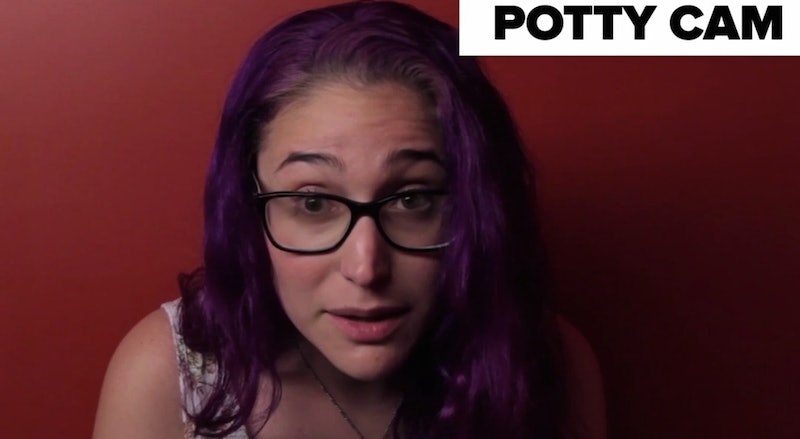 Gender is fluid, I think we can all agree, but if you've got a penis, there's definitely an advantage when it comes to the ease of relieving yourself. If ever there's a universal gripe about the difference between the sexes, it's the issue of urination. In BuzzFeed's video "Women Pee Standing Up For The First Time," four brave ladies try out the SheWee, a phallic little funnel tool that helps women enjoy the benefits of being upright and peeing at the same time. In theory.

Before they take on the task of using the SheWee for the potty cam (like I said, very bold and brave to pee on camera), our four heroes talk about just how little men appreciate their ability to use the world as their personal toilet. "If my boyfriend had to live one day with a vagina where he had to sit down on the toilet, he'd never go anywhere," one girl says. Another valid complaint: "How many times have I been on a road trip where a guy friend just pisses in a bottle?" which proves that 1) men don't recognize their penis privilege and 2) men are disgusting. "Pee standing up? Next thing you know, Lady President." Entirely plausible.

There are mixed reactions and trepidations about using the SheWee. General consensus: it's tougher to use than it looks ("Not as instinctual as you would think"), the branding is more than a little bit sexist ("Stand Up and Take Control!," which apparently is a power only connected to the phallus), and the pee went everywhere. Reviews: one girl LOVED it, one hated it, one thought it was gross and unneccessary, and another was surprised that it's hard to pee standing up when you have a mental muscle memory of sitting down being related to going Number One.

Overall, the SheWee was met with mixed reviews. As for me, I agree with the woman who said she kind of missed the peace that comes with sitting down when you pee, because I like to do the New York Times crossword puzzle or lurk Twitter when I'm on the porcelain throne. Here's the video:

More like this
Long Live Bennifer!
By Allie Jones
Why The '365 Days' Sex Scenes Are Good, Even If The Movies Aren’t
By Arya Roshanian
Sandra Bullock, Girlboss Extraordinaire
By Matt Harkins & Viviana Olen
Twitter Is In Utter Meltdown After 'Derry Girls’ “Poignant” Finale
By Sam Ramsden
Get Even More From Bustle — Sign Up For The Newsletter