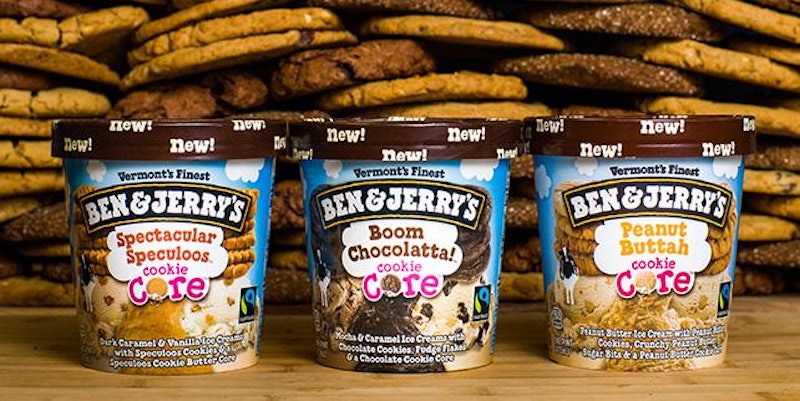 Remember how ice cream titans Ben Cohen and Jerry Greenfield, better known as Ben & Jerry, hinted in their AMA last week that some new Core ice cream varieties were on the way? Well, the official announcement has been made: Starting in February, Ben & Jerry’s new Cookie Core ice cream flavors will be available in stores everywhere — and one of them features Speculoos. You heard me: Cookie butter ice cream finally exists. You know what that means, right? Yep — we’ve finally reached the pinnacle of frozen dessert excellence. All other ice cream varieties may as well just pack up and go home now, because nothing will ever beat this one. Ever.

Here’s the deal, my sweets-loving friends: The Ben & Jerry’s Core line, which debuted just about a year ago and feature a pillar of things like raspberry jam and salted caramel running straight up through the center of the carton, will be expanding next month with the addition of three new flavors. Marketed under the name Cookie Core, they’re kind of like inside-out ice cream sandwiches: Delicious ice cream on the outside, bakery goodness on the inside. Let’s take a look at the specific flavors, shall we?

Chocolate lovers will probably gravitate right towards this one, but it’s also got something in store for those who aren’t totally cocoa-obsessed: The chocolate cookie bits, fudge flakes, and cookie core sit not within a tub of chocolate ice cream, but one of mocha and caramel ice creams. Way to up the ante, Ben and Jerry.

I saved the best for last, because how could you not? Spectacular Speculoos takes dark caramel and vanilla ice cream and loads it with bits of speculoos cookies and a big ol’ cookie butter core. Given how easy it is to polish off a jar of cookie butter with nothing but a spoon… well, let’s just say that we should probably all carefully portion out each serving of this ice cream before consuming it instead of just tackling the cartoon with a spoon. You’ve got to savor it, you know?

For those of you who are curious about why Ben & Jerry’s tends to announce its new flavors in the dead of winter — that is, right around the time most people are probably craving warm desserts, not frozen ones—there’s actually a pretty solid piece of logic behind it. According to Bloomberg Business Week, retailers “reset their freezers at the start of the year so they can be fully stocked and consumers will be familiar with the new flavors by the time weather warms up.” Ice cream flavors in general — not just those belonging to Ben & Jerrys’ — typically launch anytime between January and April; since February is on the earlier end of the schedule, it’s likely that Ben & Jerry’s is hoping to get a leg up on the competition.

While we’re on the subject of Cores, I’ve got a few suggestions for what to do next. Call me, Ben & Jerry’s. I’ve got plenty more where these came from:

Does anyone else think a pie-inspired line would be absolutely magical? I mean, think about it: Pie up the middle, ice cream all around. What’s not to love? And what’s more, you don’t just have to limit yourselves to fruit pie flavors (although I’m partial to a good sour cherry pie myself); you can cover chocolate with Mississippi mud pie, peanut butter with peanut butter pie, and even caramel and nuts with pecan pie.

2. That Takes the Cake Cores

OK, admittedly, the name needs a little work — but Birthday Cake Core (birthday cake in the middle, neapolitan ice cream on the outside) and Boston Cream Cake Core (custard surrounded by chocolate ice cream and fudge) are waiting in the wings, and I think they’re getting a little impatient. Just sayin’.

Seasonal Cores, anyone? Try Peppermint Mocha during December (Peppermint stick ice cream surrounding a mocha or chocolate core), Red Velvet during February (bonus points if the core itself is heart-shaped), or Irish Cream for March (how’s about a partnership with Bailey’s?).

If you want to get really wild, I’m sure there’s a market somewhere for an ice cream with a fried Twinkie core. Or something.

The quintessential Sweet N’ Salty Core would probably consist of pretzels on the inside and M&M ice cream on the outside, but I’m open to other suggestions.