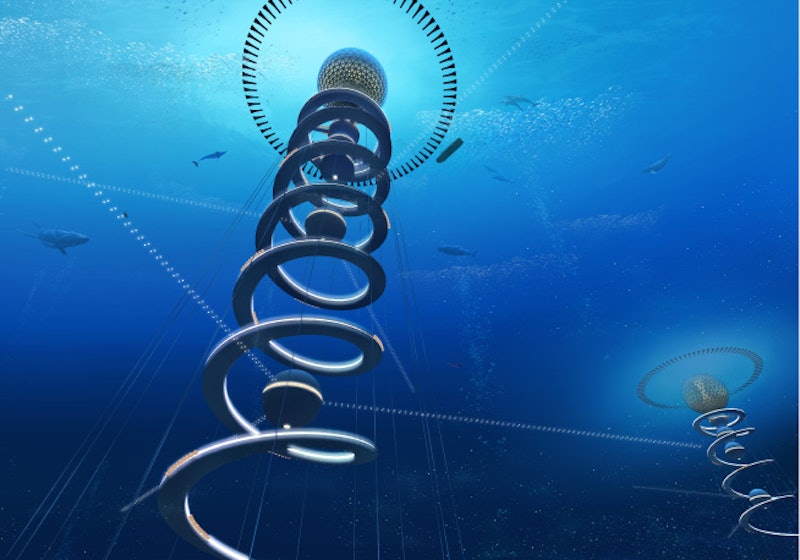 Anyone who's seen The Little Mermaid and sang along to "Under the Sea" has dreamed of an underwater world at some point in their lives. Well, now our cartoon vision could very well become reality, because Japanese architectural and engineering firm Shimizu Corporation wants to build Ocean Spiral, an underwater city in the deep sea. While the concept is no doubt ambitious, Ocean Spiral would change mankind as we know it in terms of food, resources, energy, and more. Expanding into the deep sea, Earth's final frontier, could save the human race when our planet's surface becomes uninhabitable.

Ocean Spiral, which was unveiled late last year, is exactly what it sounds like — a massive corkscrew-shaped structure that would house residential complexes, commercial spaces, and research centers.

Approximately 70% of the earth’s surface is covered by the ocean, and the ocean itself consists of approximately 80% deep sea. The deep sea offers enormous potential for ensuring effective and appropriate cycles and processes in the earth’s biosphere. ... This large-scale concept seeks to take advantage of the limitless possibilities of the deep sea by linking together vertically the air, sea surface, deep sea, and sea floor.

The construction would reach 4,000 meters below sea level, and along the spiral, different depths would be used accordingly for different functions.

At the top, floating near the water surface, would be the Ocean Spiral base camp, a sphere-shaped structure 500 meters in diameter called the Blue Garden, which could hold 5,000 people in homes and hotels and can be submerged under water during inclement weather. At the bottom near the ocean floor would be an "Earth Factory" used for CO2 storage and reuse as well as to cultivate natural resources from the deep sea.

The company's site lists five main reasons to build these Ocean Spirals: food, energy, water, CO2, and natural resources. The deep sea offers a vast ecosystem for food, potential for untapped energy, possible ways of creating fresh water, ability to treat CO2 emissions, and the ocean floor is an unexplored territory that could be rich with natural resources. Thus, not only would the Ocean Spiral offer alternative housing for humans, it could possibly revive the planet itself to extend life on Earth.

Ocean Spiral is listed on Shimizu Corporation's website under the "Shimizu's Dream" section, which also includes a solar-energy-generating belt around Earth called the Luna Ring, a nature-infused city called the Green Float, and a space hotel that helps facilitate space tourism. Each idea is as ambitious as the next, and each one deserves its own science-fiction novel.

But Ocean Spiral doesn't have to be a creation of the distant future, Shimizu says. The company said in a statement that the first Ocean Spiral, which would cost three trillion yen (around $25.5 billion), could be complete by 2030.