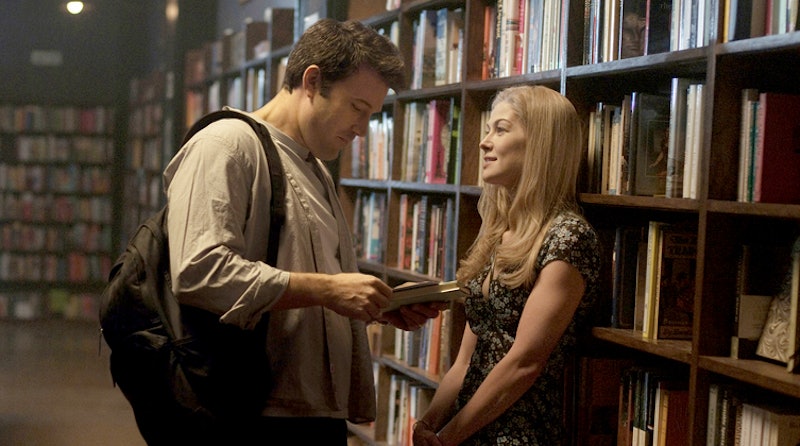 There's a lot to be said about David Fincher's adaptation of Gillian Flynn's Gone Girl. There's a lot that has been said about Gone Girl — debates have raged, analyses of marriage have been written, Golden Globe nominations doled out. But there's still been a voice I've been waiting for, and it's finally arrived: The Gone Girl honest trailer is here.

Gone Girl's a pretty intense, pretty dishy movie, so it was guaranteed that the fine people over at Screen Junkies would have plenty of material to mine once they finally got around to making that honest trailer. And lo, did they. This trailer touches on most of the important aspects of Gone Girl, from the fact that it's totally a prestige version of a Lifetime original movie, to the utter shock of that ending (and, yes, Ben Affleck's penis), to how weird it felt to actually want to see more of Tyler Perry. They also sneak in a Serial reference and one for How I Met Your Mother.

This movie was definitely a trip. As Screen Junkies put it:

See the film critics are still debating as being pro- or anti-feminist, even though its message boils down to 'don't have sex with crazy people.'

More like this
Why The '365 Days' Sex Scenes Are Good, Even If The Movies Aren’t
By Arya Roshanian
Long Live Bennifer!
By Allie Jones
The 'Thor: Love and Thunder' Trailer Finally Shows Christian Bale As Villain Gorr
By Grace Wehniainen
Sadly, 'Fantastic Beasts: The Secrets Of Dumbledore' Isn’t Streaming — Yet
By Arya Roshanian
Get Even More From Bustle — Sign Up For The Newsletter