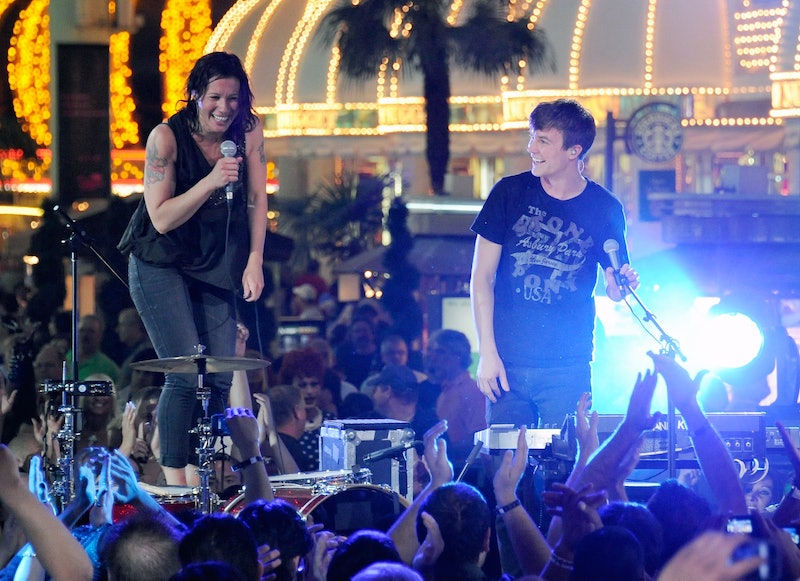 If you're sick of listening to rappers telling you to pop some Cristal or pour a shot of Patron while you're out on the town, Matt and Kim's "Get It" lyrics will speak to you. Although it's still about partying it up until the wee hours of the morning instead of watching Netflix from bed, it centers around not wanting to go home and singing at the top of your lungs to songs you may or may not know all the words to. Because let's be real: unless "Blank Space" is blasting at the club, you probably don't know every lyric to the hottest club hits. Actually, this is a kind of club song that I can get behind — it has the signature snaps of a good rap song, beats to twerk to, intelligible lyrics, and plenty of drum beats and synth notes to jam out.

As for the actual lyrics, a sampling of them is below, including a potential shout out to Fifty Shades of Grey. In the lyric video (which you can check out below), Matt spanks Kim onstage as that part of the song plays, which I'll say is a call-out to the upcoming sexy novel adaptation. (And yes, they're a couple in real life, so it's totally cool.) Matt and Kim's first album since 2012, New Glow , is out on April 7, and on every weekend until then, I'll be blasting "Get It" while drinking overpriced drinks... or Trader Joe's wine.