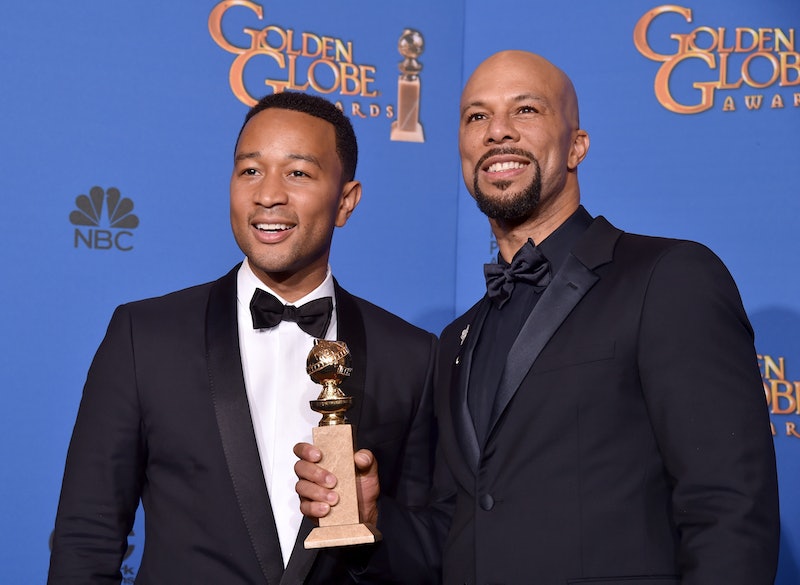 As far as standout awards show moments go, one of the biggest highlights from the 2015 Golden Globe Awards was without a doubt Common's riveting acceptance speech after "Glory," his song with John Legend, won the award for Best Original Song in a Motion Picture. The passionate words he used to draw parallels between the Civil Rights movement in the film Selma and similar current events moved many in the audience to tears. On Monday, the rapper/actor released the video for "Glory" and in the same spirit of his speech and the film, the visuals are simple, poetic and equally moving.

Set against the backdrop of a lit stage, the video opens with John Legend on the piano and immediately progresses to a back-and-forth exchange between his performance and vivid scenes from Selma that include protestors facing off with the police and marching across a bridge with linked arms to represent their solidarity. Common's performance takes on a very intense, commanding feel, and his presence is almost regal. It's safe to say that he drew inspiration from his starring role in the film, where he portrays James Bevel, a prominent Civil Rights leader who helped to organize the historic 1965 voting rights marches alongside other prominent figures from that era such as Martin Luther King, Jr., who is portrayed by actor David Oyelowo.

Common and Legend don’t do too much in the way of performance, but not much is required because the manner in which they deliver the song's meaningful lyrics still serves its purpose of evoking emotion. Common does a most excellent job in personifying the power and intensity of the Civil Rights movement depicted in the film.

Check out Common and Legend’s inspirational performance in the “Glory” video below: