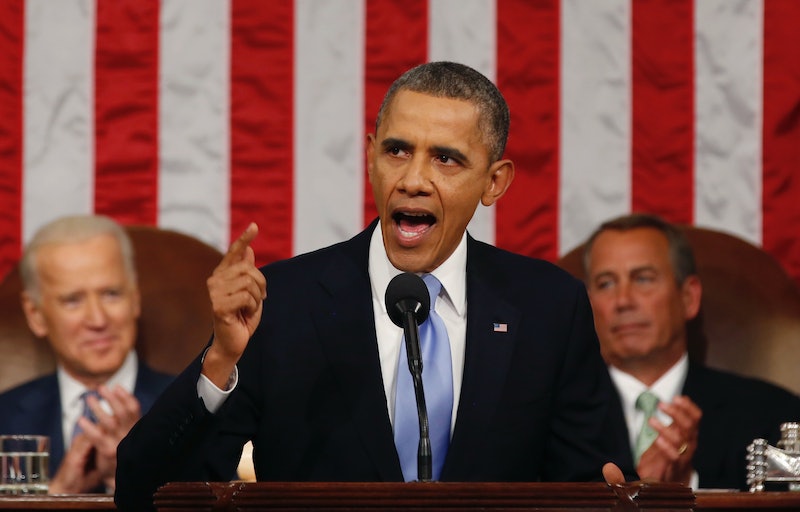 It's that special time of year when people play the absolute nerdiest drinking games: the State of the Union. But more importantly than this year's specifically tailored rules ("Drink every time Obama talks about economic recovery!"), it is an update on our great nation and 2015's plans. Plans that Republicans will be falling all over themselves to thwart. But when is the State of the Union address, and what else should you know about it? I've got your quick guide right here.

Like I said, this a political nerd's equivalent of the Grammy's. But even you non-policy wonks should get on board. The wonderful thing about the State of the Union is that it is never quite the same. It is the ultimate topical discussion from the Leader of the Friggin' Free World. How can you not be excited about this?!

But whether you're like me and already planning your presidential-party menu, or you're a reluctant participant in the on-goings of democracy in general, just watch the damn address. Trust me on this one. You'll seem a lot smarter in class or at work the next day at the very least.

Q: When is the State of the Union address?

A: Nope. The White House will have a live stream on its YouTube channel, Google+, and through its mobile apps. We live in 2015. You find a way to stream Pretty Little Liars every week, so I think you'll be fine.

Q: What is Obama going to talk about anyway?

A: This year, Obama is doing something that he's never done before — giving a preview of his State of the Union. The president is hitting the road for a three-day preview of his speech in Wayne, Michigan; Phoenix, Arizona; and Knoxville, Tennessee. It looks like he'll be covering the recovering auto industry, cybersecurity, the housing market, college attendance, and all sorts of other things that actually affect your life. I told you this was important!

A: Yes, you could. But this will be the biggest public speech that Obama will likely make in the fourth quarter of his presidency. That's a pretty big deal. Plus, it only typically happens once a year, so just do it, OK?

Q: Why do they do they have a State of the Union?

A: It is actually required as per Article II, Section 3 of the U.S. Constitution, which states:

He shall from time to time give to Congress information of the State of the Union and recommend to their Consideration such measures as he shall judge necessary and expedient.

Guess they should update that language to "he or she," am I right, Hillary?! But yes, this is the time when Obama addresses both chambers of Congress at once to let them know what's up.

Q: So, about this drinking game. What's your favorite rule?

Definitely every time a Republican eye rolls. Look to Speaker of the House John Boehner for this one. He's the tan, surly one to Obama's left.