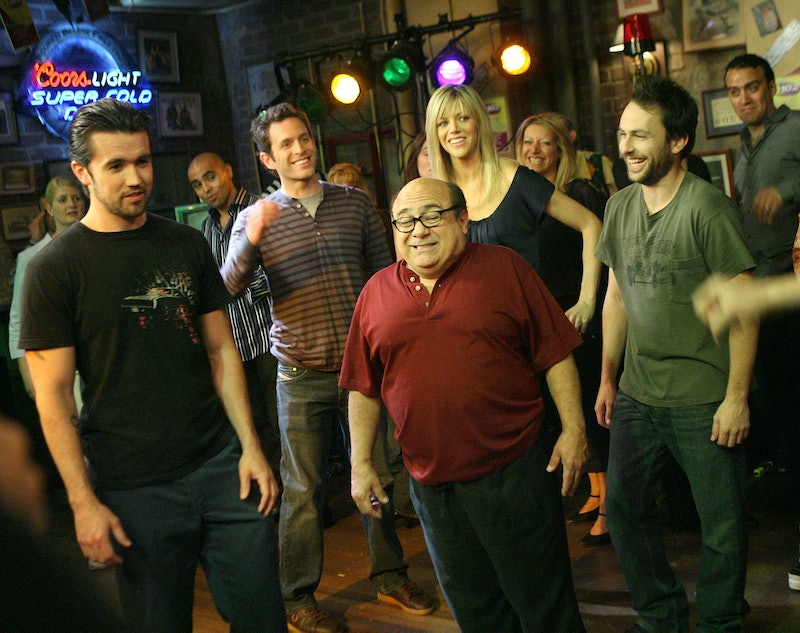 It is absolutely possible to have too much of a good thing, or there would be no hangovers and weight gain. But too much television isn't something I'm used to arguing against, even if some fans are convinced that It's Always Sunny should end soon. But, despite thoughts to the contrary, last year, It's Always Sunny in Philadelphia was renewed for Seasons 11 and 12. That puts the show on the air until 2017 — at least! So we'll be getting more adventures from Paddy's Pub, even if they'll be on a new network, FXX. And they didn't go quietly, either. Actually, the creative team behind Sunny got a fantastic deal out of this.

Original creators Glenn Howerton and Rob McElhenney have been trying to get a second pilot off the ground for years now, and they'll be getting yet another shot over on FXX now. Plus the network ordered a pilot for another new sitcom written by Mary Elizabeth Ellis (The Waitress), Artemis Pebdani (...Artemis), and Charlie Day (bona fide movie star/Charlie Kelly) that will star Ellis and Pebdani. So FXX has sweetened this deal with the promise of future projects, which hopefully means that they're not going to be relying exclusively on Sunny to prop up the network in the next few years.

But the reception to this news wasn't all positive. Most of the creators and stars are working on other things at the same time, but even devoted fans feel like the show may have peaked a few seasons ago. In my opinion, the Season 9 finale, "The Gang Squashes Their Beefs" would have served as a perfect series finale, with the Gang lighting all of their best friends and worst enemies on fire, and walking away.

While I'll always end up catching up on a season with the Gang, a lot of the show's best creative ideas seem like they're on the wane. Even co-creator Glenn Howerton said Sunny should probably come to an end after ten seasons (though that was before FXX got them such a sweet development deal) in an interview with Rolling Stone:

There’s a certain point where you wear out your welcome and we don’t want to do that. We want to leave them wanting more. We spend a lot of time trying to find new lines to cross. We’re not trying to offend people…but we’re looking to surprise them. I think we’re proud of what we’ve done so far, so it’s time to stop. I’m sure there are already a few people who are like ‘Jesus Christ is that show still on? Go away.’

But Howerton backtracked on that sentiment preeeetty quickly once fans got a hold of it, claiming that it was all a big misunderstanding, and that he was simply referring to what he thought might happen by the tenth season, and that the Always Sunny crew would quit whenever the show ran out of ideas. Some fans seem to think now is that time:

Hmm. I can see what these fans are saying, but there's another side to the story here. The Always Sunny stars are not going to pass up the chance to develop a whole slate of programming for FXX. But here's the crucial element: if Sunny is funny, it's always welcome. But if Sunny ain't funny, it'll be easy to ignore on such a far-off network, and we can catch the cast on other, better shows. That's a win-win, if you ask me.