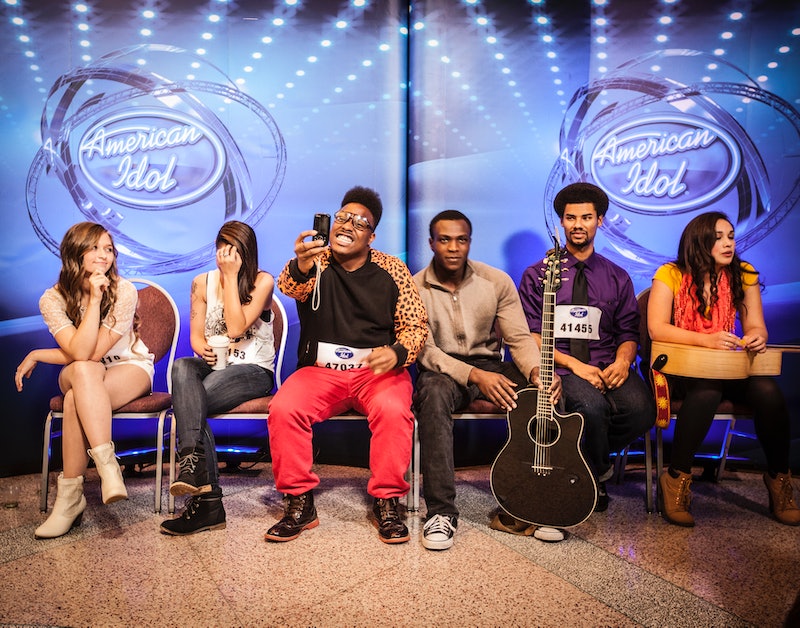 For the first time ever, American Idol revealed its Top 24 in a music video before even airing the first of the Season 14 auditions, and fans are having some seriously mixed feelings about it. You might say that even bothering to air the auditions and the dreaded Hollywood Week is a complete waste of time, but the truth is that Idol wouldn't be Idol without them. In fact, this one change is so minor that it shouldn't matter that it's not tradition — but more importantly, revealing the Top 24 is a tactic that might just save the show.

It's no secret that Idol has been losing viewers over the years, and its once world-renowned ability to create superstars has suffered because of it. By revealing the Top 24 early on, new fans might fall in love with them enough right now to actually watch and vote later on. When I think of the song "Feeling Good" (the one in the Idol video), I still think of Adam Lambert's astonishing cover of the classic six years later. It's memorable performances like Adam's that have been lacking on Idol, but the Top 24 video might help change that. Watch the video below.

In alphabetical order by first name, here are the rumored Top 12 girls and Top 12 guys, as compiled by The Idol Pad, who might finally give Adam Lambert a run for his money.

This is a wild guess, but I'm almost positive Adam is the flawlessly rich voice that completes the Top 24 Reveal video. The video you see above is from 2009, but his Vine proves his voice has only gotten bigger. If that's him, I see even more growth in Adam's future.

Adanna is no stranger to the stage, having been on The Voice's Team Adam Levine, however briefly that may have been. The year between then and now must have done this 16-year-old some good if she's really made it to Idol's Top 12 Girls.

I almost wanted to show you Alexis first because to me, she is a clear favorite. Her audition timing could not have been more perfect — country music needs a new female superstar. Next Carrie Underwood, anyone? We shall see.

I don't know how this street performer only got two votes from the judges during auditions. Even after researching the other contestants, Clark is still one of the most memorable. Every reality competition needs a heartthrob, and Clark definitely fills that role for this season of Idol.

I know what you're thinking — of course he's singing Justin Bieber, he looks like a child. But don't be fooled. It's hard to tell who's who, but head to 0:45 of the Top 24 video, and I'm pretty sure that's our Daniel. Not too shabby, huh?

With the name, the sunglasses and the hat, you can tell "Jax" Cole has the cool-girl vibe. Even though we haven't seen her audition yet, you can tell from her impeccable song choice in this video that her live performances will be just as cool as she seems.

Every Idol season needs a quirky contestant just as much as it needs a heartthrob. Her assortment of untraditional instruments alone should have been enough to put her through. When the live shows begin, who knows what surprises she'll have in store? But one thing should surely be consistent — her unusual, intriguing performances.

Katherine has a soft, soothing voice that is consistent throughout her YouTube channel. But we won't know how much of a contender she is until her audition is aired on FOX. I'm guessing her performances leading up to the live shows will shock us all.

I was extremely happy to find the Loren made it to the Top 24, because her audition wasn't as exciting as some of the others, but she certainly has potential. I'm also glad the judges made her sing a second song, because it showcased the type of performance I want to see from her moving forward.

I'm always a little skeptical about a girl who changes her name and then isn't that impressive in her audition. I wasn't a huge fan of the song choice, but the voice was there.

This 15-year-old made it to Hollywood in Season 13, but unfortunately didn't get much further. A year of experience can do a lot for a young country singer. Plus, it's always fun to keep up with the contestants who don't quite make it the first time around and then try again in a later season.

Another familiar face, Mark Andrew is also a Voice contender from Team Shakira. He did get two chairs to turn during his audition back in the day, but it seems the Idol judges have been even more forgiving. Obviously he is determined to make it far in this reality competition.

This kid knows how to make an audition memorable. In fact, he sounded even better with J. Lo in his arms. This was the audition I saw on repeat the morning after it aired on multiple news channels. Last year, Michael's audition didn't get him nearly as far, but this one will surely be remembered for seasons to come.

Any guy who sings The Beatles alongside his obviously adoring father is OK in my book. I can almost guarantee that when Nick's audition airs, his father will be right there cheering him on.

Now this is just darn cute. Brothers who play together stay together, and the brothers who encourage you to go after your dreams are even better. I personally cannot wait to see what's in store for Qaasim as a solo act.

Quentin is the definition of a great first impression. In less than 30 seconds, this video sparked my interest without even seeing his audition.

Nothing is more exciting than a mashup that just works. I love when guys do covers of female songs, and then to pull that flawlessly angelic Frank Ocean falsetto is almost unfair. The other contestants better keep an eye out for Rayvon.

Riley's was another audition that made me want to hear more. He has such a refreshing sound and cool attitude that I would have been more than a little surprised if the judges didn't advance him.

I know the four-time Idol auditioner Sarina-Joi Crowe was going to make it far the moment she opened her mouth. Having auditioned for the first time in Season 10, the now-19-year-old was couldn't have been older than 16. But now we can consider her a seasoned performer and watch her rise to stardom before our eyes.

Savion is no stranger to this moment, because he only missed a spot in the Top 24 by a hair in Season 13. Since then, he's gotten more experience, changed his look, and come back with a vengeance.

The Voice didn't quite work out for Shi Scott, either. I know this video's a little long, but watch it and you will not regret it. She's got the looks, the quirky attitude, and the husky-soul voice Idol desperately needs.

Another great 30-second impression, Shannon has a gift of entertaining without even showing you her eyes. This is the only tidbit of the husky voice that YouTube would allow us. But luckily, Shannon will finally reveal herself as Idol rolls on.

This is by far my favorite audition. J. Lo was right: there's nothing better than a self-proclaimed geek. And this one's got the chops to go with the vibe. Keep Trevor in mind when you're voting and do not underestimate the nerds.

Any 12-year-old with the confidence to belt out a Dreamgirls tune for the world to see deserves a real-life spotlight. It's never a surprise when the young hopefuls reel in the votes. Finally old enough to audition, Tyanna has a real shot at this.

Hopefully we'll be seeing much more of all these talented singers as American Idol Season 14 continues.