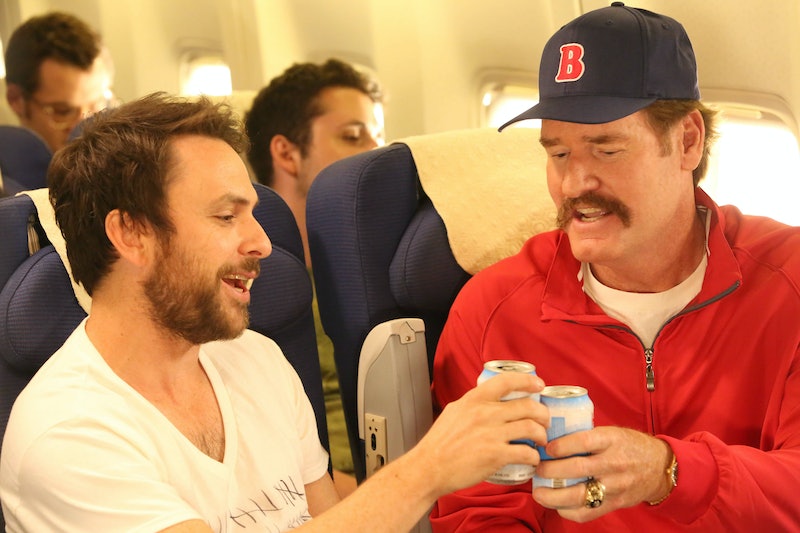 Charlie Day appeared on The Tonight Show with Jimmy Fallon to promote It's Always Sunny in Philadelphia's upcoming season premiere recently, and when he did, he spared no detail about working with Major League Baseball Hall of Famer Wade Boggs in the Always Sunny Season 10 premiere. In the premiere titled "The Gang Beats Boggs," the foursome attempts to do just that: beat Boggs' mythological record of drinking at least 50 beers during the course of a single flight. Of course, Boggs was also a baseball player, so he's got a few more things racked up in his legacy.

Boggs played for the Boston Red Sox, the New York Yankees, and the Tampa Bay Devil Rays during his career as a third baseman and if you've ever heard the name Tony Gwynn, you should know Boggs. He was considered to be one of the MLB's top hitters around the time Gwynn was hitting his stride as well. Of course, being the Always Sunny gang, Day and Co. were far more focused on Boggs' drinking exploits.

It's not shocking that on a show where the characters only realized they're alcoholics during an accidental detox, that a baseball player legendary for his drinking habits would inspire an entire episode. In the episode, Boggs appears to Charlie as a hallucination caused by alcohol poisoning. It's like that time he went to the Jersey Shore, but on a plane and with a Hall of Famer instead of the waitress (I'm guessing). Day told Fallon that, on the set, Boggs revealed that those 50 beers were more like 107. And apparently, the legend continues, because as Day added during his Fallon interview, while everyone was drinking prop beers during filming, Boggs was most definitely sipping on the real stuff.

So how will this all turn out? Sunny is predictably unpredictable, but this is Season 10, so I might have an idea or two of how the series will handle this opportunity for inappropriate hilarity:

If the gang is competing against each other, Dee simply cannot win — even if she has actually won. Does anyone else recall the episode "Reynolds vs. Reynolds"? Frank and Dennis get into a car accident but somehow, after an "internal investigation," Dee is held culpable. Even in "The Gang Dances Their Asses Off," Dee is the last woman standing until she's sabotaged by another character. No matter how hard she tries, Dee just can't win.

2. Frank Will Get Locked In The Bathroom

So much of Danny Devito's best sequences are slapstick and visceral comedy. If he's not shaving off all of his body hair or sewing himself into a leather couch while naked, Frank Reynolds is probably stuck in a small space, ranting and raving about those "donkey-brained" days of yesteryear. Besides he's gotten stuck in a toilet before, while tripping on LSD no less, so this is a great opportunity for the show to nod to one of its most iconic moments... maybe a mile high, this time?

3. Dennis Will Be A Pervert

A plane full of female flight attendants and Dennis is a terrifying combination. He may not be able to quite pull off the "D.E.N.N.I.S. System" on an airplane, but I'm sure that any way he tries to manipulate the competition will involve one very unlucky lady.

4. Mac Will Be Eliminated First

It's an ongoing gag that Mac is too hot-tempered and well, dumb, to keep up with the rest of the gang. In "CharDeeMacDennis" he could barely keep it together during the game long enough to go without smashing the table. I expect Mac will concoct some sort of hare-brained scheme to outsmart the rest of the crew only to shoot himself in the foot.

Charlie is the only one resilient enough to beat the gang in a binge drinking competition. Years of sniffing glue and other household products have prepared him for this very moment. Remember: Charlie was still standing after eating that garbage-fire-grilled brownie made of sleeping pills in "The Gang Dances Their Asses Off" and in "Mac's Banging The Waitress" he was pretty lucid after crushing twelve beers in one sitting. As far as I'm concerned, it will be Wade Boggs' apparition that motivates Charlie to beat the rest of the crew.

And I guess that's certainly one way to pay homage to a sports legend.