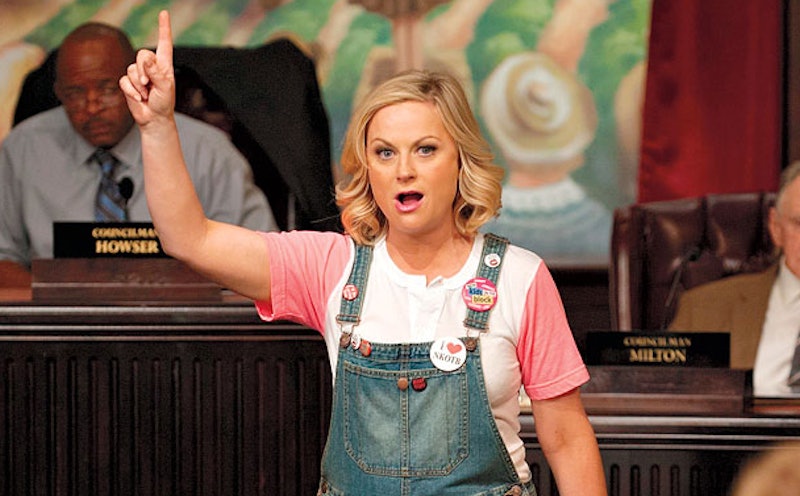 Despite the inevitable tears of many who love it, Parks and Recreation will leave our lives in a matter of weeks. It is our duty as fans, then, to give Leslie Knope and the town she so loved a proper send-off — and that includes remembering the way our real-world politics shaped Pawnee's. It may be a funhouse mirror, but it's a mirror nonetheless — and one that, despite Leslie's Sisyphean journey, has the power.

The politics of Parks and Rec have always been key to the series — even though creator Mike Schur has made sure never to frame it with the divisiveness of America's political parties. As Schur said in an interview with Mo Ryan, which you can see transcribed at The Huffington Post:

We were very careful — still are. I don't think we've ever mentioned the word Democrat or Republican [on the show]. ...Even when Leslie was running [for town council], we never said, "She's running as a Democrat."

One could argue at length about Parks' own brand of liberalism or conservativism — or, more often, satire of both — but even the feigning at neutrality is telling: sometimes our own political hang-ups and divides aren't the most effective way of getting a point (or a story) across. Pawnee, then, both rose above America and utterly represented it. And in this final season — which will find Leslie after getting ousted from her city council position but now very much enmeshed in a much more nationally powerful position — we'll get to see how they wrap it up. Much focus has been put on how Parks' farewell will take shape in terms of character journey, but also interesting is how it will wrap up its particular views on politics. It's a sitcom, after all, and not a Seinfeldian one laced with nihilism — as Schur notes, Parks isn't planning on going the route of The Wire.

I think that's the essence of the difference between a comedy show and a drama. On some level, we have to present optimism. If the systems are really, really screwed up, which they very clearly are, it's like, we have to keep trying. We've got to keep trying, and you're going to fail a lot.

Parks' paintings of the political sphere haven't always been optimistic, but it's hard to imagine a finale wherein Leslie Knope doesn't get some more of what she's always dreamed of. President she will likely never be, but I can't imagine they'll find her again at the emotional bottom she hit after being impeached. And given the show's history, it wouldn't feel genuine for her final victory to be familial — last season assured she's already got her big, loving family, and Leslie's trajectory was never about that in the first place.

So what will that final victory be?